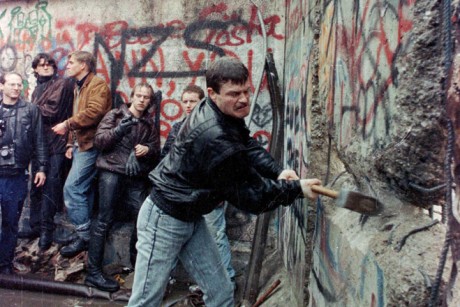 What began as a simple fence, evolved over time into a complex deterrent system filled with electric fences, massive light systems, patrol dogs, bunkers and minefields.  Today, twenty-five years later, we reflect after the fall of the Berlin Wall – also known as the Iron Curtain – and how the breaching of it ended the isolation that was endured for half a lifetime by members of The Church of Jesus Christ of Latter-day Saints in Germany.

For a young missionary from the United States in the mid-1980s serving in former West Germany, life did not seem all too different than any other. You followed the mission rules, stayed in your areas and life was great. The largest impact on the Gospel of Jesus Christ moving forward became more cultural than anything. You heard stories of or knew of families – brothers and sisters, children and parents – that had been separated by the Berlin Wall.

For the church operations, it became an issue of deciding what materials such as lesson manuals, hymnbooks and copies of The Book of Mormon were the most important to get to the Saints for the next year or so. Because of the worries that the materials may not make it past the border, suitcases were utilized carefully as there was only so much space that could be used in a car without making it look suspicious. Tithing often waited to be sent to The Church of Jesus Christ of Latter-day Saints’ headquarters in Salt Lake City because of the money restrictions that were set.

Most missionaries that served in West Germany before the wall would have never imagined or dreamed that they would witness the Berlin Wall tumbling down in just a few years after they returned home.

Thomas Gehlauf however was a native German. For him, this was more than news, it was a celebration. A celebration of freedoms. Originally from the Dresden Ward, he was among the second group of missionaries allowed from the GDR (German Democratic Republic) to serve in other lands. He left the GDR in May 1990 to serve in Colorado and returned from his mission to a reunified Germany. He recalled the excitement among Church members within the GDR when full-time missionaries entered the country after the Berlin Wall fell in 1989. Brother Gehlauf said that serving as a stake missionary at the time was:

“…wonderful preparation for going on a full-time mission. We had teaching appointments almost every day till 9:00 or 10:00 in the evening. And there were baptism almost every Sunday for about six months after the missionaries came to Dresden.”

A Temple Behind the Wall

The blessings of missionary work were not the only blessings about to manifest themselves, nor could they have been imagined at the time they started to become plain and clear. Manfred Heller, first counselor in the Dresden Ward bishopric, explained that before 1985 very few had the possibility of receiving temple blessings. Permission had to be obtained from government authorities to travel out of the country. In exceptional cases, people who were retired occasionally received permission and traveled to Switzerland for their endowment.

After years of searching for answers, President Thomas S. Monson dedicated the land for the Freiberg Germany Temple. Soon Germany’s people would receive temple blessings. Four years before the Berlin Wall fell, the Freiberg Germany Temple was dedicated on 29 June 1985. During the two-week public open house that preceded the dedication, approximately 90,000 people toured the temple; and it was reported that thousands stood as long as five hours in the rain to see the new temple. Now, thousands of faithful Latter-day Saints have received their temple blessings in this holy house.

Blessings Continued After the Wall Fell

Gary Huggard sat in his living room in the middle of the Ramstein Air Force Base just East of Miesenbach an 800 year old German city of peat farmers and coal miners. It was November 9th, 1989, and Gary Huggard’s eyes were glued to the television. As the small, talking box in front of him reported the news that the Berlin Wall had fallen, it was surreal. He recorded later about that moment:

“I had been following world politics very closely ever since I was in college.  I knew that someday the Lord would break down the barriers of Communism to allow His Gospel message to the go to those nations.  The fall of the wall was truly a miraculous event for which to Lord deserves the credit.  It was time to take the gospel to Eastern Europe, Russia and central Asia.”

Later that year, he was asked to serve as the Stake Mission President of the Kaiserslautern Serviceman’s Stake. They baptized many refugees, at least one hundred from Eastern Europe, Russia, Africa, and other nations until he was released mid-year 1991.

Bringing Forth A Spirit of Optimism After the Wall Fell

When the wall fell in 1989, Jens Curwy was out with his colleagues. They started to discuss how there was an American Church building under construction in Marzahn. He thought it was wonderful because this church was bringing forth a new spirit of optimism for Germans who once were not able to worship as they pleased, if at all.

Years passed and Jens had severe chest pain. As he sat in the hospital waiting room, he prayed to God saying, “Please God, I do not want to die yet. I have a mission still to fulfill.” He was called back and tests were extensively run. The doctors were shocked when the results came back normal; Jans’ pain had been relieved.

At that time he knew that he wanted to be baptized the right way, he just had to find it. He only knew he did not want to be a Catholic. So, he kept searching for churches that he could join that had the authority of correct baptism.

About 39,313 out of 81 million people are now faithful members of The Church of Jesus Christ of Latter-day Saints. 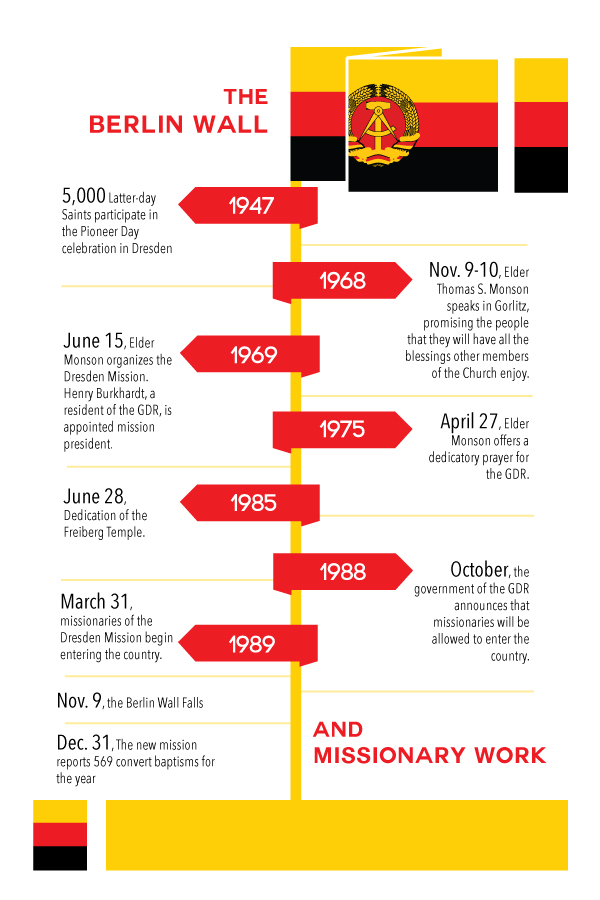