Faith LDS History This is Lucy Mack Smith’s Gold Bead, and Boy Does It Have... 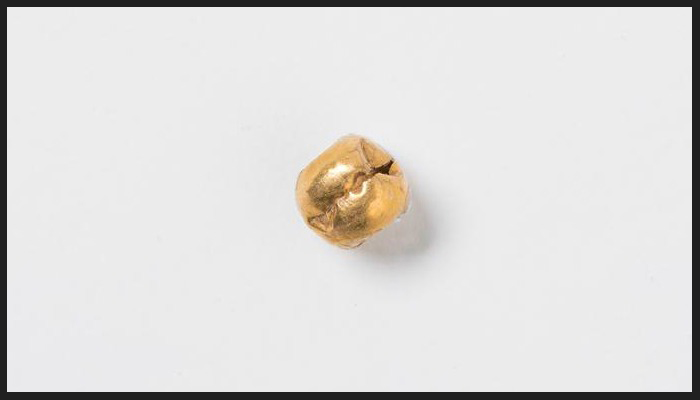 It might just be a tiny gold bead—not even a very good-looking bead—but underneath its sparkle it’s got a revealing story to tell. What you’re about to read is based on a true story rewritten from Lucy Mack Smith’s personal journal. All quotes are direct from her record. Most all other details derive from her descriptions.

Let’s go back in time

The year is 1830. Joseph Smith has finally managed to publish The Book of Mormon. The Church is up and running in Fayette, New York. It’s an exciting time to be a member of the Church, but a dangerous time as well.

We’re at Joseph Smith’s parents home. It’s a Thursday. Joseph Smith Sr. and Lucy Mack answer the knock at the door. It’s a debt-collector. Joseph Sr. owes the man 14 dollars (about 320 dollars today). Joseph Sr. says he can only pay six dollars, but promises the rest would come soon.

This is not acceptable to the debt collector. He threatens to put Joseph Sr. in jail if the debt goes unpaid any longer. But then he offers the Smiths a way out of the sticky situation: “Thee will burn up the books of Mormon if thee will throw them into the fire and burn them up I will forgive thee the debt.”

Lucy Mack watches as the man offers the impossible compromise. The man shakes his fist over the cackling fireplace as he speaks.

Joseph Sr. is undaunted by the offer. If the price for physical freedom is the betrayal of all he knows to be true, it is a price that Joseph Sr. will not pay.

“No sir I shall not do that,” he replies.

“Very well,” the man retorts, “thee shall go to jail then.”

Lucy Mack and her beads

Lucy Mack interjects, clutching the golden beads hanging from her neck. She removes the necklace and holds it out to the man threatening to take her husband away. “These beads are the full value of the remainder of the debt—and we do not wish to owe any man I beg of you to take these and be satisfied to give up the note.”

Lucy Mack is not known for giving up without a fight, and she wasn’t about to start now. She makes one thing very clear to the man. “God has raised up my son to bring forth a book which was written for the salvation of the souls of people and for the salvation of your soul as well as mine you have come here to distress my family and me by taking my husband away to Jail and you think by this to compel us to deny the work of God and to destroy a book which we know has been brought forth by the gift of the Holy Ghost but sir we shall not burn the book of Mormon nor deny the inspiration of the Almighty.”

The man simply walks to the door and calls for the constable, who is ready and waiting nearby for just such an occasion.

Soon the constable’s hand it on Joseph Sr.’s shoulder. “You are my prisoner,” the lawman says.

Sensing the inevitability of the situation, Lucy Mack implores the man to allow her husband to eat his dinner, which she has already prepared for him. The man refuses and instructs the constable to load Joseph Sr. into the waiting wagon.

The constable obliges, secures Joseph Sr. in the wagon and then returns to home. He eats the meal Lucy Mack had prepared for her husband.

“Wives! who love your husbands and would sacrafice [sic] your lives for their’s,” Lucy Mack would later write, “how think I felt at that moment I will leave you to imagine. Sufice [sic] it for the present to say that after devouring the last mouthful of provisions which we had in the house they drove away with My husband and I left alone again with Lucy [Smith] my youngest child.”

It’s Sunday morning. Samuel Smith arrives at Canandaigua, New York, to inquire after his imprisoned father. Samuel finds him behind bars with an alleged murderer as a cell mate.

Joseph Sr. tells Samuel the details of his confinement, beginning with the dismal wagon ride that ripped him from Lucy’s side.

“The men by whom I was taken commenced using every possible argument to induce me to renounce the Book of Mormon saying how much better it would be for you to deny that silly thing, than to be disgraced, and imprisoned, when you might, not only escape, but also have the note back; as well as the money you have paid on it.”

Joseph Sr. refused then just as he refuses now to compromise his convictions.

“I shuddered when I first heard these heavy doors creaking upon their hinges,” he continues to Samuel, “but then, I thought to myself, I was not the first man, who had been imprisoned for the truth’s sake. And when I should meet Paul in the paradise of God, I could tell him, that I too had been in bonds for gospel which he preached. And this has been my only consolation.”

Joseph Sr. admits he’s only been fed a weak broth since his internment. It’s now his fourth day in prison and Samuel fetches his father some much-needed food.

Joseph Sr. spends 30 days in jail, during which time he works in the jail yard employed as a cooper until the debt is payed.

But that’s not all he does. Every Sunday he preaches. He teaches his peers about the restoration of the gospel of Jesus Christ. When Joseph Smith Sr. leaves the barred windows behind, he leaves behind two new converts.

The faith to endure

It’s clear where the Prophet Joseph Smith Jr.’s immense faith comes from. His parents were saturated in faith—and not just any faith. It’s easy to have faith when it leads to immediate blessings, but the Smith’s had faith even when it lead to immediate incarceration, hunger and ridicule.

When you’re faced with trials of your faith, remember Lucy Mack Smith’s gold bead and the fierce faithfulness it witnessed nearly 200 years ago.