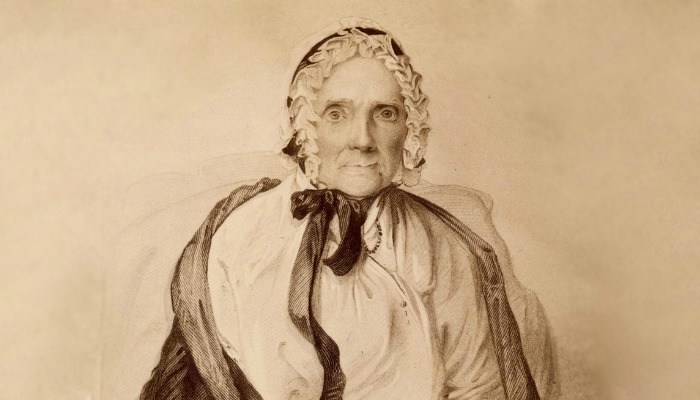 In my study of Church history, I’ve learned about a lot of amazing people — but there are few whose testimonies I admire more than Lucy Mack Smith’s.

Raised by faithful parents, Lucy was no stranger to spiritual experiences, which served her well as the mother of the first prophet of the restoration. In fact, before Joseph received the First Vision, Lucy knelt in a grove herself, praying that her husband would find spiritual truth — and she received a vision that brought peace to her soul. She was a woman of deep, abiding faith in the Lord and love for His gospel. She believed that her son saw what he said he saw — God the Father and His Son Jesus Christ — and that through Him, Jesus’ Church was being restored to the earth.

So when others doubted Joseph and disparaged his testimony? Lucy was not having it. Thus begins our story of how she came to prophesy to a mocking pastor. She told him that not only was the Book of Mormon true, but that many in his own congregation would believe in it and come to be baptized into The Church of Jesus Christ of Latter-day Saints.

In her own words, Lucy recorded:

“In a few days subsequent to this, we all set out to visit Mrs. Stanly, who was also my brother’s daughter. Here Mr. Whitermore gave me an introduction to one Mr. Ruggles, the pastor of the Presbyterian church to which this Mr. Whitermore belonged.

“And you,” said Mr. Ruggles, upon shaking hands with me, “are the mother of that poor, foolish, silly boy, Joe Smith, who pretended to translate the Book of Mormon.”

I looked him steadily in the face, and replied, “I am, sir, the mother of Joseph Smith; but why do you apply to him such epithets as those?”

“Because,” said his reverence, “that he should imagine he was going to break down all other churches with that simple ‘Mormon’ book.”

“Did you ever read that book?” I inquired.

“But,” rejoined I, “the Scriptures say, ‘prove all things’; and, now, sir, let me tell you boldly, that that book contains the everlasting gospel, and it was written for the salvation of your soul, by the gift and power of the Holy Ghost.”

“Pooh,” said the minister, “nonsense—I am not afraid of any member of my church being led astray by such stuff; they have too much intelligence.”

“Now, Mr. Ruggles,” said I, and I spoke with emphasis, for the Spirit of God was upon me, “mark my words—as true as God lives, before three years we will have more than one-third of your church; and, sir, whether you believe it or not, we will take the very deacon, too.”

This produced a hearty laugh at the expense of the minister.

Not to be tedious, I will say that I remained in this section of country about four weeks, during which time I labored incessantly for the truth’s sake, and succeeded in gaining the hearts of many, among whom were David Dort and his wife. Many desired me to use my influence to have an elder sent into that region of country, which I agreed to do. As I was about starting home, Mr. Cooper observed that our ministers would have more influence if they dressed in broadcloth.

When I returned, I made known to Joseph the situation of things where I had been, so he dispatched Brother Jared Garter to that country. And in order that he might not lack influence, he was dressed in a suit of superfine broadcloth. He went immediately into the midst of Mr. Ruggles’ church, and, in a short time, brought away seventy of his best members, among whom was the deacon, just as I told the minister. This deacon was Brother Samuel Bent, who now presides over the High Council.”

Lucy Mack Smith had incredible faith and trust in the Lord — and because of that trust, she was able to prophesy and to help all people everywhere understand that Jesus is the Son of God and the Book of Mormon is His word.