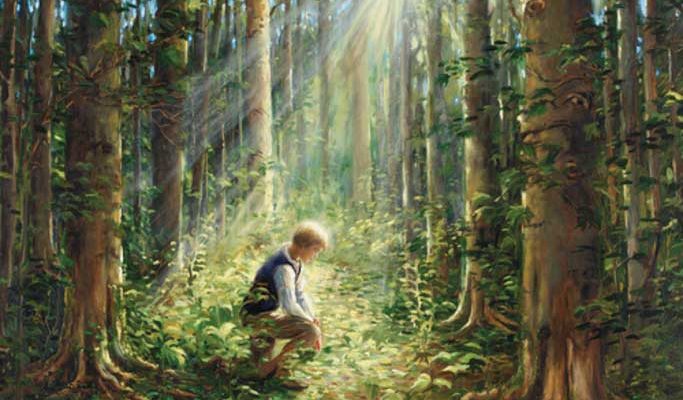 Because the internet has been out at my home, I have walked to McDonalds several times a day for work. This has been a wonderful opportunity to meet people out and about in my apartment complex. One such occasion arose late last week. The sun had already set, and I needed to go back for a few more hours of work.

As I walked, a man rushed up to me and asked me for help. His car would not start and he was looking for some tools so he could get at what he suspected the problem was. As far as appearances go, let’s just say if I asked for a business card I doubt he would have had one handy. His beard grew ragged, and the embers of his cigarette grew long.

My wife wouldn’t be home until very late, so I had plenty of time and went back home to get him whatever tools I could find. When I returned with them, the man was very grateful, and I told him I’d be working at McDonalds, so he could give them back to me once he got the car working. This is where the conversation got interesting. This fellow, Justin, looked at me and said, “Are you stupid or something?” 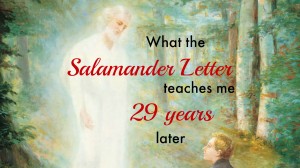 “I obviously need some tools, and you’re just going to leave these with me.”

“I’ve got to get some work done. You can drop them back at my apartment if it’s easier,” I said.

At this point Justin just looked confused. “But what if I take them from you?”

“I just did you a favor. Why would you take my tools?” I asked

I laughed and told Justin again to bring the tools by when he was done. Which he did. This entire episode seemed entirely uneventful to me until Justin seemed so confused by it. I think my behavior here is all together pretty average for Latter-day Saints, many of whom are engaged in actual and important service. But as I left Justin and finished walking to the McDonalds, I wondered what specific gospel principle had led me to so readily lend my stuff to Justin. I mean he was right, it was risky.

At this point you may be rightly wondering what in the world this entire story has to do with the salamander letter. As a bit of background, only because this is a very old story, the salamander letter was a forged document that the Church bought in the mid 1980s. The letter alleged that Joseph Smith was led to the golden plates by a white salamander. The documents came to light in the midst of a murder scandal that had nothing to do with the Church. The entire episode has proven fodder for anti-Mormons for many years. First came the allegations that the Church tried to hide the documents, which is demonstrably untrue. But second came the allegation that if the Church was led by prophets they never would have purchased a forged document.

Living by Love and Trust

I come from a later generation than the salamander letter. By the time I could spell no one really spoke about it anymore. But my study of the Church and its history was thorough and that second question proved provocative. At the time of the purchase, Gordon B. Hinckley admitted there was a possibility of forgery, but the purchase did happen. When questions about the letter were more fresh, Dallin H. Oaks published an article in the Ensign magazine which discussed the issues. There he addressed this second question head on. He said:

In order to perform their personal ministries, Church leaders cannot be suspicious and questioning of each of the hundreds of people they meet each year. Ministers of the gospel function best in an atmosphere of trust and love. In that kind of atmosphere, they fail to detect a few deceivers, but that is the price they pay to increase their effectiveness in counseling, comforting, and blessing the hundreds of honest and sincere people they see. It is better for a Church leader to be occasionally disappointed than to be constantly suspicious.

Lesson from the Salamander Letter

Which ties me back in to lending my tools to Justin. As I left, I realized that by lending him my tools, I was trying to follow the example of the church leaders purchasing historical documents. Sure, every once in a while my tools might get taken, but over the course of a lifetime I would be so blessed by not having to be constantly suspicious. The salamander letter and, more importantly, the murders that resulted from Mark Hoffmann trying to hide the forgery are tragedies. Yet even within that tragedy a lesson of love and trust rises up. And it is this example that helps me try and improve my life nearly thirty years later.