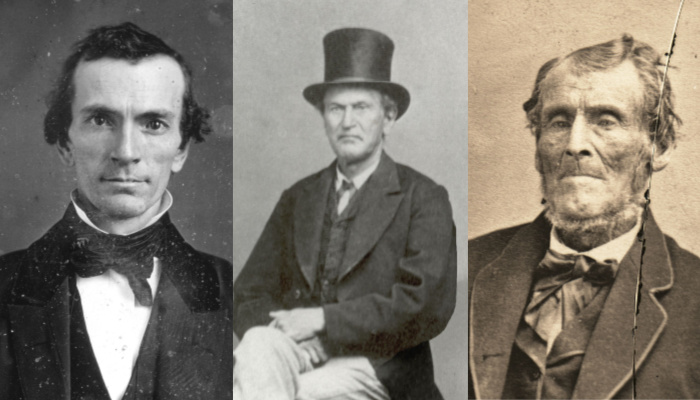 Despite the distant relation, Oliver and Joseph didn’t meet until April 1829. Oliver worked as Joseph’s scribe from April until June, when the translation of the Book of Mormon was completed (predominantly in Oliver’s hand).

2. After Oliver separated from the Church, he became a well-respected lawyer

While Oliver was practicing law, he had an apprentice named William Lang. Lang later became a prosecuting attorney, judge, mayor of Tiffin Ohio, and Ohio state senator. About Oliver, he wrote,

Mr. Cowdery was an able lawyer and a great advocate. His manners were easy and gentlemanly; he was polite, dignified, yet courteous. He had an open countenance, high forehead, dark brown eye[s], Roman nose, clenched lips and prominent lower jaw. He shaved smooth and was neat and cleanly in his person. He was of light stature, about five feet, five inches high, and had a loose, easy walk. With all his kind and friendly disposition, there was a certain degree of sadness that seemed to pervade his whole being. His association with others was marked by the great amount of information his conversation conveyed and the beauty of his musical voice. His addresses to the court and jury were characterized by a high order of oratory, with brilliant and forensic force. He was modest and reserved, never spoke ill of anyone, never complained.

3. Oliver was 22 years old when he started working as Joseph Smith’s scribe

5. Oliver’s association with the Book of Mormon lost him a job

From Richard Lloyd Anderson’s Investigating the Book of Mormon Witnesses,

“The spirited presidential of 1840 necessitated a Democratic paper in Seneca County, Ohio, and both a press and an editor were imported. Cowdery was chosen for that job, obviously on the basis of recommendations of prominent Democrats of his Cleveland-Kirtland region, some 125 miles northeast. A prominent Tiffin politician later said of the founding of that campaign paper, ‘Oliver Cowdery was to have been editor, but was dropped on the discovery that he was one of the seven founders of Mormonism.’

If the arithmetic of the six organizers or the eleven witnesses is garbled, the recollection is clear that a Book of Mormon witness was no political asset and could not be tolerated in a local party post. The fact that Oliver Cowdery nevertheless remained in Tiffin for seven years and earned the respect of a biased community says a good deal for his personal capacities and character.”

6. For a time, David became the mayor of Richmond, Missouri

All evidence points to the fact that he was a well-respected man in Richmond. In 1884 the St. Louis Republican wrote,

“The honesty and excellent character of the Whitmer family are substantiated by the people of Richmond without exception.”

7. David stared death in the face and upheld his testimony

According to John P. Greene,

[W]hen the mob again assembled they went to the houses of several of the leading Mormons. And taking Isaac Morley, David Whitmer, and others, they told them to bid their families farewell, for they would never see them again. Then driving them at the point of the bayonet to the public square, they stripped and tarred and feathered them, amidst menaces and insults. The commanding officer then called twelve of his men. And ordering them to cock their guns and present them at the prisoners’ breasts, and to be ready to fire when he gave the word, he addresses the prisoners, threatening them with instant death unless they denied the Book of Mormon and confessed it to be a fraud; at the same time adding that if they did so, they might enjoy the privileges of citizens. David Whitmer, hereupon, lifted up his hands and bore witness that the Book of Mormon was the Word of God. The mob then let them go.

8. David went to great lengths to correct those who misrepresented his testimony

“It is recorded in the American Cyclopedia and the Encyclopedia Britannica, that I, David Whitmer, have denied my testimony as one of the Three Witnesses to the divinity of the Book of Mormon: and that the two other witnesses, Oliver Cowdery and Martin Harris, denied their testimony to that book. I will say once more to all mankind, that I have never at any time denied that testimony or any part thereof. I also testify to the world, that neither Oliver Cowdery nor Martin Harris ever at any time denied their testimony. They both died affirming the truth of the divine authenticity of the Book of Mormon.”

David Whitmer, An Address to All Believers in Christ by a Witness to the Divine Authenticity of The Book of Mormon (David Whitmer: Richmond, Virginia, 1887).

“It having been represented by one John Murphy of Polo Mo. that I in a conversation with him last Summer, denied my testimony as one of the three witnesses to the Book of Mormon. To the end therefore, that he may understand me now if he did not then, and that the world may know the truth, I wish now standing as it were, in the very sunset of life, and in the fear of God, once for all to make this public Statement;

That I have never at any time, denied that testimony or any part thereof, which has so long been published with that book as one of the three witnesses. Those who know me best, well know that I have adhered to that testimony.—

And that no man may be misled or doubt my present views in regard to the same, I do now again affirm the truth of all my statement[s], as then made and published. He that hath an ear to hear, let him hear; It was no Delusion. What is written is written, and he that readeth let him understand.”

9. David was introduced to Joseph Smith by none other than … Oliver Cowdery!

He and Oliver were buds.

10. David was forced out of Far West due to Danite persecution

The Danites were a vigilante group of Latter-day Saints that persecuted those who left the faith. David fell away from the Church in 1838 due to disagreements with Joseph Smith, but he continued to live among the Saints in Far West, Missouri. In June 1838, he received a letter from Sampson Avard (Danite leader), instructing him to leave town, “or else a more fatal calamity shall befall you.” He left with his family and resettled in Richmond, Missouri. The Danites represent an unpleasant bit of Latter-day Saint history, but they were a thing, and this unfortunately happened.

11. In 1841, newspapers reported that Martin Harris had been assassinated in Illinois for speaking out against the Church

Nope. Martin didn’t die until 1875. According to researcher Richard Anderson,

“This was soon corrected by the Painsville Telegraph, which reported from Harris’s residence in Ohio that he was still alive to read ‘what shall be said of him after his death.'”

Nonetheless, he received a quaint tribute from an editor in Rochester, New York:

“We have ever regarded Mr. Harris as an honest man. We first became acquainted with him at Palmyra, in the spring of 1828, shortly after the plates from which the Book of Mormon is said to have been translated, were found. … Though illiterate and actually of a superstitious turn of mind, he had long sustained an irreproachable character for probity. … By his neighbors and townsmen with whom he earnestly and almost incessantly labored, he was regarded rather as being deluded himself, than as wishing to delude others knowingly; but still he was subjected to many scoffs and rebukes, all of which he endured with a meekness becoming a better cause.”

12. After Martin was excommunicated, he associated himself with several different Latter-day Saint splinter groups.

Despite his disillusionment with Joseph Smith, Martin’s zeal for the Book of Mormon burned brightly throughout the rest of his life. No matter which splinter group he associated with at any given time, he always reiterated his witness of the Book of Mormon record and the angel who presented it.

The Latter-day Saint splinter groups he associated with, however briefly, were the Strangites (James Strang), Whitmerites (David Whitmer), Williamites (William Smith), and Gladdenites (Gladden Bishop). For a time he was also associated with the Shakers. Eventually, he re-joined the “Brighamites” in Utah and was re-baptized in 1870.

13. Martin Harris re-joined the Saints in Utah via the Transcontinental Railroad.

Apparently it was a perfectly acceptable practice in the 1800s. At least, that’s what the History channel says.

Related: Women Witnesses of The Book of Mormon

I got two different answers from two different inflation calculators, which you can try double-check for yourself if you’d like, here and here. Speaking of money, Martin was not a fan of paper money. He liked good old-fashioned gold and silver. Thus, he was not a fan of the Church-sponsored Kirtland Safety Society that would later develop, which dealt in paper money. The failure of the KSS was probably the principle cause of his disillusionment with the Church and Joseph.

What other fun facts do you know about the three witnesses? Share them with us in the comments!