This article was originally written by Sarah Petersen for Deseret News. The following is an excerpt.

Did you know that one of the heaviest Angel Moroni statues weighs 4,000 pounds, that one statue was colored white or that the statue usually faces east?

With temples all over the world, The Church of Jesus Christ of Latter-day Saints has adorned the skyline with angel statues for 169 years, ever since the Nauvoo Temple was dedicated in 1846.

The Nauvoo Temple, however, did not feature the same type of statue LDS Church members are familiar with today.

According to articles in the New Era and Liahona magazines, the statue’s design has gone through many iterations and has an intriguing history.

How much do you know about this Mormon icon?

Here are 20 little-known facts and stories about the Angel Moroni statue.

The idea to use the prophet from the Book of Mormon to top the temple came from sculptor Cyrus Dallin, who was not a member of the LDS faith.
LDS Church President Wilford Woodruff had asked Dallin to create something for the central spire of the Salt Lake Temple, so Dallin searched through LDS scripture for inspiration. It was Dallin who decided to sculpt Moroni because he believed Moroni was a good representation of the restoration of the gospel.

2. Which temple was the first to have an angel?

The Nauvoo Illinois Temple.
This was the first LDS temple to have an angel atop the holy building.
It was dedicated in 1846 and was said to have had a horizontal angel attached to the lightning rod in the form of a weathervane.
While this was the first angel to top an LDS temple, it was not specified as being the Angel Moroni.

3. Which temple had the first official Angel Moroni statue?

The Salt Lake City Utah Temple.
This was the first temple to have an angel statue that was identified as Angel Moroni.

4. Which temples don’t have a statue?

5. What scripture is often used in reference to the statue?

Revelations 14:6.
This scripture reads: “And I saw another angel fly in the midst of heaven, having the everlasting gospel to preach unto them that dwell on the earth.”
Many members of the LDS faith believe that the Angel Moroni statues represent the angel in John’s vision in the New Testament. 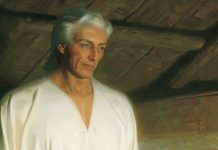