Faith LDS Temples The Fashions of the Angel Moroni Statue 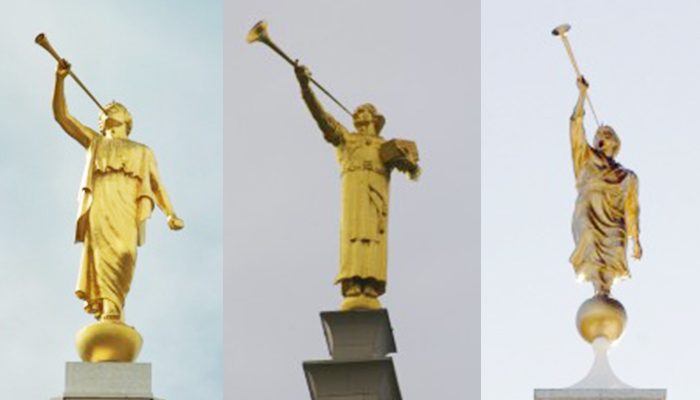 Seeing an Angel Moroni statue atop the temple can be awe-inspiring. But not every Moroni is the same. In fact, there are eight different Moroni statues in use by the Church today!

But Angel Moroni statues did not always top temples. The earliest LDS temples had weathervanes, and it wasn’t until the 6th temple — the Salt Lake Temple — that the Moroni statue was introduced. The next Moroni statue wouldn’t be placed on a temple until 1956!

1983 marked the turning point. The Atlanta temple featured an Angel Moroni statue, and of the 126 temples dedicated since then, only 2 did not receive an Angel Moroni before dedication, and even those got a statue within a year.

Of the 15 temples that had originally been built without a statue, seven have been retrofitted with one. Of the fifteen not yet dedicated temples for which designs have been released, all have Angel Moroni statues planned. With one exception.

The Paris France temple made a design choice to have no spires, and consequently no Angel Moroni will be placed. Could this mark a new direction? Or is it a single blip on a thirty year tradition?

Of the Angel Moroni’s in use, each has an interesting and unique history that tells us something of the time and conditions of where the temple was built. 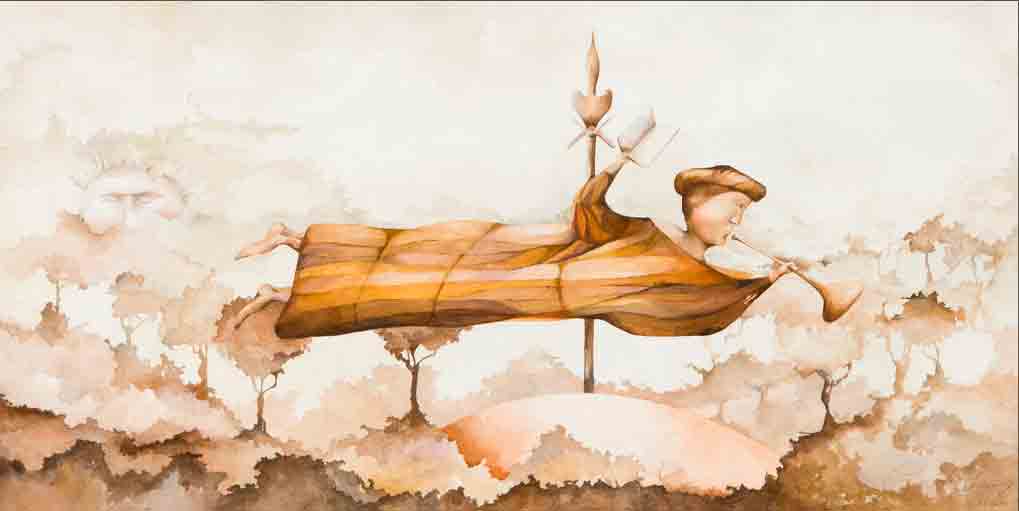 Did you know that in the early days of the restoration of the Gospel, before there were ever Angel Moroni statues, there were weathervanes?

The first temple of the Restored Church was dedicated in 1836 in Kirtland, Ohio. On top of the single tower a weathervane turned with the wind.

At the time, weathervanes were often placed on the tallest buildings in a community —  churches and civic buildings alike — and were of great use to communities whose industries were often dependent upon the weather for survival.

The Nauvoo Temple had a 3-dimensional weathervane in the form of an unnamed figure made of tin and gilded in gold. It was fashioned in the likeness of a man, holding a book raised in one hand and a trumpet to his lips in the other, wearing robes and a cap and lying horizontal as if flying.

This statue was not explicitly Moroni. It represented the angel described in the verse in Revelation 14:6: “And I saw another angel fly in the midst of heaven, having the everlasting gospel to preach unto them that dwell on the earth, and to every nation, and kindred, and tongue, and people.”

After the LDS Church relocated to Utah, the first temples built in their new home would also have weathervanes. The Saint George Temple had a weathervane on its original short tower and still does on its current taller tower. The Logan Temple was built with two towers, one at each end, both topped with a weathervane.

The weathervane fashion was left behind by the time the Salt Lake Temple was getting near to completion. Cyrus Dallin, an internationally recognized sculptor born in Utah, was contacted by President Wilford Woodruff about the creation of a statue for the East spire of the temple.

Dallin, not a member of the Church, chose the visitation of Moroni to Joseph Smith as the subject of his sculpture and a fitting symbol of the Restoration.

Like the Nauvoo weathervane before it, Dallin’s statue wears robes, this time in layers, and a cap on its head. It holds a trumpet in the right hand and the right arm raises it skyward in proclamation.

The left arm is at the statue’s side, and both fists are tense. Unlike the Nauvoo weathervane, the 12 foot 5 inch statue stands immovable on a massive granite sphere.

Dallin’s statue firmly linked the angel icon with the prophet Moroni in the minds of the members of the Church.

Second Moroni, Angel in the City of Angels 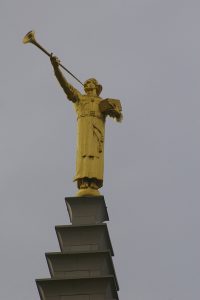 As construction commenced on the Los Angeles California Temple in 1951, Utah sculptor Millard F. Malin was contacted by the Church about creating a new statue to go atop the temple in the prominent California neighborhood.

Designed specifically for the Los Angeles California Temple, Malin’s Moroni is one of a kind. According to the sculptor, the style was heavily influenced by the Book of Mormon paintings of Arnold Freiberg, especially in regards to clothing and muscle tone.

Besides the clothing, often described as Mayan in style, this 15 foot tall statue has two other features not used on any other Moroni Temple Statue to date.

Also, unlike all the other versions of the statue currently in use on temples which feature bare feet, this statue wears sandals.

This is also the first of two statues to be created for use on top of temples where the statue is holding Gold Plates in the crook of his left arm, the first of only two statue models in use to do so.

Third Moroni, An Ensign to the Nations

When the decision was made to build a highly visible temple in the Nation’s Capital, the decision 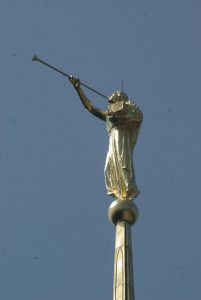 was made to top the new temple it with a new Moroni.

For this new temple, the Church would contact multiple artists to invite them to submit designs for the statue. Of the eight submissions the Church received, they would choose the design of Avard Fairbanks.

Avard Fairbanks’ Angel Moroni is the only temple statue that has the trumpet pointing the same direction as the feet. All other statues have the trumpet and head turned at a right angle to the chest and feet.

Like Malin’s Moroni, this angel holds a reproduction of the Gold Plates in the crook of his left arm.

The robes on Fairbanks’s Moroni are long, longer than on any other Moroni. They cover part of the feet, well below the ankles. Most Moroni Statues have the robes end about or above the ankles.

This statue was also the first to be used on more than one temple. Originally, just an 18 foot statue (from feet to crown) was commissioned. Later three 15-foot versions were made to be used on other temples. The Washington DC statue is still the tallest Angel Moroni in use. 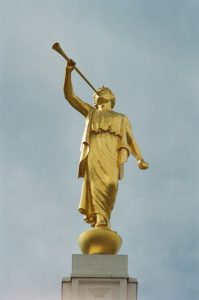 In about 1930, Torlief Knaphus was asked to create a replica of the Moroni used on the Salt Lake temple. The statue is a foot shorter than Dallin’s original. Knaphus said that, while it looks the same from a distance, the arms and shoulders are “beefier” than the original.

The statue was used on a chapel until the 1970s. An artist named LaVar Wallgren recast the statue in fiberglass to be used on the Idaho Falls and Atlanta temples.

This new method of making statues from fiberglass made them lighter, easier to transport to locations around the globe, and cheaper. Additionally, the temple did not require the heavy structural reinforcement earlier statues required due to being cast from metal.

This allowed for statues to be placed on smaller temples and narrower spires, including temples that had not been originally designed to have the statue.

The Idaho Falls statue remains, but the Atlanta Statue was removed, replaced with another model, then refurbished. That statue now sits on the Boston Temple. This Boston Statue, a recreation of the Dallin Statue, is on the temple closest to the Massachusetts home where Dallin lived for most of his life.

About the time that the Knaphus statue was being recast, Karl Quilter was commissioned with creating 2 new standard 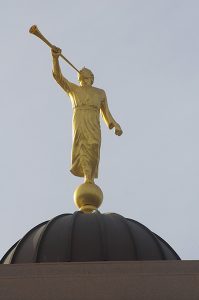 statues, one large, one small. They would be cast in fiberglass and used on a regular basis. With about nearly 100 copies in use, there are more of this Moroni Statue than any other.

The statue’s left hand is held away from the body at a greater angle than the other two Quilter statues. The left wrist is bent down slightly. The robe on the left sleeve is smoother, devoid of defined wrinkles, and the cuff hangs round and loose on that arm.

The left leg comes straight down from the waist and bends back at the knee, projecting forward slightly in front of the chest.Seen from the side, the left arm is bent forward at the elbow. The left hand is clenched in a fist.

Close up, the right hand the fingers holding the trumpet are spaced apart, except the thumb which overlaps the pointer finger and touches the middle finger.

This statue is 7 feet in height, foot to crown. 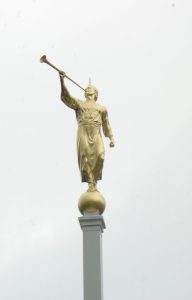 Temples vary in height. As such, a shorter statue that looks good on one temple might look too small or too tall on another. Quilter’s second statue is 10.5 feet tall and is a taller alternative to the previous version.  With almost 40 in use it is the second most plentiful Moroni Statue.

When viewed from the front, the hem of the robe hangs straight down from the waist, not being blown to either side.

Compared to the smaller version, the left arm is closer to the body. The wrist on the left arm has no bend to it, and the left leg bends forward and slightly to the outside, emphasizing the left ankle being behind the right foot. The cuff is tightly windswept and blown out behind the arm.

On close inspection of the right hand, the fingers touch together and the thumb touches the side of the pointer finger without overlapping it.

Standing at just 6’ 10” tall, this third statue of Quilter’s was sculpted primarily
for the Nauvoo Temple, though it’s also been used on similarly sized temples.

The truly unique feature of this statue is the left hand. It falls down at the statue’s side like the two preceding statues, but unlike any other Moroni in use, the hand is relaxed and open.

Another identifying feature of this statue is the robes. They have a heavier, more layered look, and appear far more disorderly and windswept than Quilter’s previous statues.

LaVar Wallgren who recast the first ever fiberglass Moroni, was brought back to design the smallest Angel Moroni statue yet.

This sculpture would be used specifically on the smaller temples. Originally they were intended to be white, but it was found that they were difficult to see. They were eventually gilded and placed on only 5 temples.

At 5 feet 11 inches tall, this statue is likely the only life-sized Angel Moroni.

Two features make this statue very unique. First and most obvious is the scroll the statue holds in its left hand.

The second identifying is that the Moroni Wallgren created is far younger than any other Moroni statue. The face is clearly that of a younger more youthful prophet, rather than an older and wiser one.

To learn more about each statue and learn about the sculptors who created them, see the new (free!) ebook Know Your Moroni. 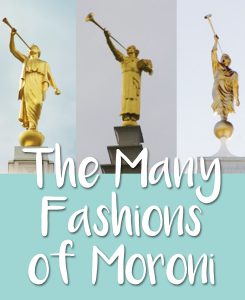