Faith As a Member Missionary, be Yourself 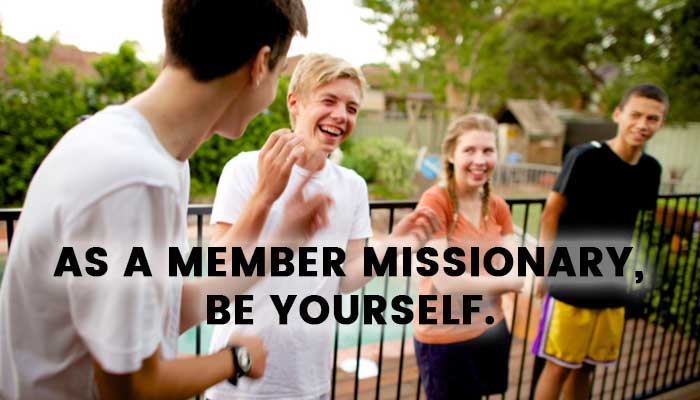 “The sister missionaries asked me to go on splits with them tomorrow.” I’d just waltzed into my little brother’s house for leftovers, when I met him and Jennie in the kitchen with my bit of random news. I think they knew I was coming; about once a week I’d come over after the kids were in bed to eat their food and grace them with my presence, so if they didn’t expect me, they at least weren’t surprised.

“I don’t think they call it splits anymore.” Jennie didn’t skip a beat as she started bringing out tupper-ware from the fridge filled with that evening’s dinner.

“What else would they call it?” I was a bit disappointed that the lingo had changed. I liked saying the word ‘splits.’ It sounded nostalgic.

“I don’t know, but it’s cool that you’re going.” Seth said, as he dished out his portion for next days’ lunch to keep me from eating it: I may or may not be guilty of this.

“Yeah, I’m pretty excited—but a little nervous, I’ve never been a part of an investigator’s discussion before.”

“Oh you’ll be fine, just be yourselllll . . . actually.” Jennie stopped in her tracks.

“Just ease them into it.” Jennie almost sounded reassuring.

“Your personality is a bit, well you just come on so …well you know, just smile and be polite.” My sister-in-law was too sweet to lay it all out.

“Definitely 50-50.” And with Seth’s final negotiation, I grabbed the ice cream out of the freezer, feeling a bit more nervous than I did before.

To say this suggestion was a surprise would be a lie. To say this was the first time I was given specific instructions not to be myself would be laughable. I’m not weird or anything. Not odd—the tools in my shed are bright, and the crayons in my box are very sharp. I am playing with a full deck of Uno cards, thank you very much.

But I can admit that I may not make the smoothest of first impressions.

The problem when you’re always 100% yourself is that sometimes that’s not always conducive to certain situations: like splits with the missionaries, or interviewing possible new hires, or first dates (especially first dates). It’s exhausting having to think before you speak ALL.THE.TIME.

I’ve heard it before “at first I didn’t like you, then I realized you were always like this with everyone, so I just got used to it.”

So in a world were authenticity is the key to happiness, how have I balanced out this certain conundrum? I don’t hide, I don’t lie, and I certainly don’t stand in the shadows. I just smile a lot and really think about what I’m going to say. So if the smile seems strained it’s not because it’s fake: my facial expressions are just working overtime to hide what I’m really thinking, and even that isn’t fool proof. My face is an open book, and when your pages are filled with sarcasm, irreverence, inappropriateness and random facts, it’s a bit difficult to tame that down for the unfortunate stranger.

So there I was, standing in front of the sisters outside the apartment complex as they hugged me, thanked me, and said, “We’ll be talking about the Sacrament, so just be ready to share your testimony—you’ll be great.”

It’s nice to know they had such faith.

It turned out that for this particular investigator my brand of personality was exactly what was needed. As we entered his house, I scanned the room of all his “artwork.” I even lingered on a few to comment on the brushstrokes, amateurish at best but definitely done with enthusiasm. Gosh, those nude paintings of women were everywhere, and good on the sisters for not blushing. All my years of art classes paid off: no shock or disgust ever flashed upon my face.

As the evening progressed, I never recoiled with his use of expletives—at first I didn’t even notice them ’till he started recounting Lehi’s dream, and for the life of me I never heard it explained in such a way before. In fact, I don’t remember Lehi using any of those colorful adjectives, but it certainly painted a vivid picture.

So what that he needed his own personal bleep button? I felt comfortable with his extended vocabulary, if only because he felt just as comfortable as he rehashed the Book of Mormon in a dialect fit for sailors. For that night and many discussions later with him I was not only myself, but I even managed to make him feel at ease with me.

It wasn’t until the sisters came over weeks later for dinner that I brought it up. “Yeah,” one of the sisters said, “that’s exactly why we chose you to come with us. We just knew you wouldn’t be offended or uptight.”

So for the moral of the story: you really should just be yourself. Heavenly Father has blessed us with so many individual and unique talents and abilities that we can use to effectively teach His gospel. Each of us has our own testimony and journey that others can relate to. That’s why we are urged to share, encouraged to reach out and asked to speak up:

“Let your light so shine before men,

that they may see your good works,

and glorify your Father which is in Heaven.”

I was the best member they could have chosen to help teach this guy. I helped the spirit stay lit despite the mis-wording of our Prophet’s revelations. As a trio, we sisters were able to let our lights shine onward even amid the gallery of scantily clad women.

On October 4th, 2015, during the 185th Semiannual General Conference President Russell M. Nelson spoke specifically to the women of the church, “We need you to speak up and speak out. . . you sisters possess distinctive capabilities and special intuition you have received as gifts from God.”

Our unique influence cannot be duplicated. “It is converted, covenant-keeping women whose righteous lives will increasingly stand out in a deteriorating world, and who will thus be seen as distinct and different in the happiest of ways.”

My uniqueness, my brand of strength and my “oomph” are exactly the type of qualities I need to share my testimony, to teach my son and to contribute to Heavenly Father’s Plan. If ever I was to hide or diminish my spirit, then how could I fully stand before my Lord and say “you gave me ten talents, and now I have hundreds.”

Be yourself, embrace your flaws, your quirks, your nuances that make you YOU. Don’t ever try to be someone else that you think is a better portrayer of Mormon stereotypes. Let others see and share in your own brand of awesome.

After-all: I’m a 37 year old reclaimed Mormon, not a sweet 19 year old sister missionary from Pleasant Grove Utah. And everything has worked out just fine.

If One More Person Comments on Testimony Meeting Silence, I Will SCREAM