Religion is an important part of our social fabric and civil society. It calls on us to serve our fellow man, to focus more on family and to contribute to the common good of the community. What’s more, it provides the structure for the inner longing for meaning that many seek in life.

With a recent poll suggesting that religion is losing influence in America, The Church of Jesus Christ of Latter-day Saints knows that it’s more important than ever to strengthen faith’s role and prominence in society. The Church recognizes that this can’t happen without locking arms (as it has done for many, many years) with other faiths. Sure, differences in belief and opinion have and will continue to exist in our pluralistic society, but love for one’s neighbor surpasses these differences.

In that spirit, the Church has partnered with Faith Counts, an organization comprised of faith communities representing over 100 million Americans. Launched this week, its website (FaithCounts.net) includes videos and social media memes aimed at telling powerful stories about how faith inspires, empowers, motivates and comforts billions of people. You can find these stories on Facebook, Twitter, YouTube, Pinterest and Google+. You can also share your own experiences about how faith has influenced your life.

Read the entire article at mormonnewsroom.org. 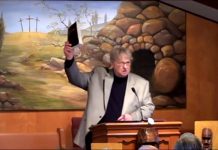