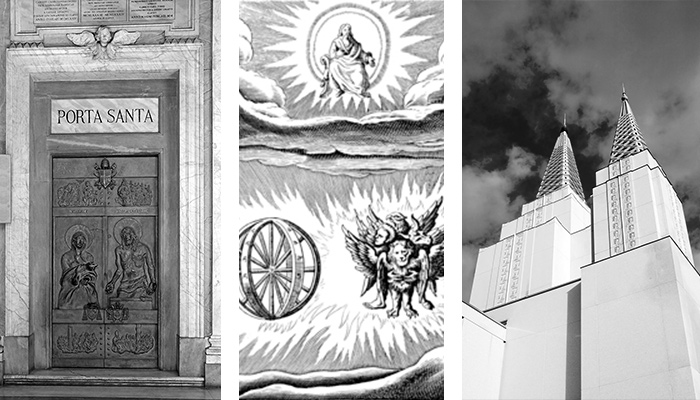 It was in 1300 A.D. that Pope Boniface VIII declared the first Holy Year. Thousands of pilgrims traveled to Rome for sanctification and universal pardon after facing great suffering brought on by war and disease. Since about 1470 the Catholic Church has regularly celebrated “Holy Years”  or “Jubilee Years” (different than Jewish “Jubilee Years”) about every twenty-five years.

Originally, Jubilee years meant a pilgrimage to Rome, where the usually cemented “Holy Door” (Porta Sancta) is opened for the worthy to pass through.

However, in 2015 Pope Francis requested that each diocese in the world designate a Holy Door, so that Catholics wouldn’t have to make the pilgrimage to Rome. Forty Holy Doors then opened to faithful Catholics. This opening of Holy Doors worldwide is meant to last throughout the “Extraordinary Jubilee of Mercy,” a period of prayer held from the Feast of the Immaculate Conception (December 8), 2015, to the Feast of Christ the King (November 20), 2016. This is the first time Holy Doors have opened around the world.

Symbolism of the Holy Door

Between jubilee years the Holy Door is sealed with bricks and mortar, a box is interred containing mementoes from the year in which it was sealed. Most of these are medals associated with papal leadership. When the jubilee year arrives, the cement and bricks are disassembled, a process associated with the effort we extend to attain God’s presence.

Christ has been described as The Door to salvation. Passing through a Holy Door symbolizes passing into the presence of God. When a pilgrim passes through a Holy Door, he wins a “plenary indulgence,” which is the remission of temporal punishment for his sins. “With great courage, a person freely decides to cross the threshold leaving behind the kingdom of this world so as to enter the new life of grace of the Kingdom of God.”

The sixteen panels on the Holy Door show the progression from Adam and Eve to the resurrection of Jesus Christ and His post-mortal appearances. “In all, these scenes remind us of our call as pilgrims to enter the mystery of salvation and to pass from sin to grace, from separation to union with God, and from death to eternal life” (CatholicStraightAnswers.com).

When Pope Francis opened the Holy Door in Rome at the beginning of this special jubilee year, he said, “To pass through the Holy Door means to rediscover the infinite mercy of the Father who welcomes everyone and goes out personally to encounter each of them.”

Passing through a Holy Door

The repentant pilgrim has to meet certain conditions to be worthy of passing through a Holy Door. He or she must reconcile with God, take holy communion (sacrament), and reject all attachment to sin. Forgiveness for sin can take place before passing through the door.

The Holy Father (Pope) has traditionally struck the door three times with a silver hammer. “On Christmas Eve, 1999, St. John Paul II knocked three times on the door while praying, “Oh God, grant your Church the grace to live this propitious moment with joy, when you have willed to open this door to your faithful, so they will come in and raise their prayers to you; and, after asking for forgiveness, indulgence and total remission of sins, will walk decisively in life according to your Son’s Gospel” (aleteia.org).

This passing through the Holy Door can be likened to moving from the endowment room to the celestial room in any Mormon temple.

Similarity can also be observed between portions Mormon temple ceremonies and the Royal Doors of the Eastern Orthodox Churches.

In Eastern Orthodox Churches the sanctuary is separated from the nave by an ornate wooden screen. This screen represents the veil in the temple at Jerusalem which separated the Holy of Holies from less sacred areas. Normally, the screen contains three doors, the center one being the most holy. The doors may represent the gate through which Jesus entered Jerusalem at His Triumphal Entry. They also represent the entrance to the heavenly Jerusalem.

The doors are opened at the most sacred moments in orthodox ritual.  When the doors are open, it means God is especially present among the worshippers. Only the higher clergy may actually pass through. Behind the doors there is a veil, which is at certain times open and at other times closed. During the week after Easter, the doors and veil are always open.

The Holy Melchizedek Priesthood qualifies Mormon temple-goers beyond even the ordination of Eastern Orthodox high priests. All who are qualified to enter the temple are also worthy to obtain the most sacred places within those temples.

“Merkabah Mysticism” refers to the heavenly chariot (merkabah is the Hebrew word for chariot) described in Ezekiel, Chapter 1. In Jewish mysticism, the chariot represents the throne of God, and the Jewish mystics focused on understanding the nature of heaven with its divisions and hierarchies. This sort of study was reserved only for mature believers of good judgment; the uninitiated were kept uninformed. As Latter-day Saints we also believe in the divisions and hierarchies of heaven, and that different degrees of glory require different qualifications.

President Brigham Young (1801–77) said of the endowment: “Let me give you a definition in brief. Your endowment is, to receive all those ordinances in the house of the Lord, which are necessary for you, after you have departed this life, to enable you to walk back to the presence of the Father, passing the angels who stand as sentinels, being enabled to give them the key words, the signs and tokens, pertaining to the holy Priesthood, and gain your eternal exaltation in spite of earth and hell.”

According to scholar Gershom Scholem, Jewish mystics around the Second Temple period studied the possibility of making pilgrimage to heaven. Especially after the temple was destroyed in 70 A.D., accessing the “temple” through mysticism was a replacement for the holy place. There was “both of the possibility of making a sublime journey to God and of the ability of man to draw down divine powers to earth….”

Literature surrounding Jewish Merkabah Mysticism also speaks of understanding the why’s and how’s of the creation of the earth, and of using holy names to summon and control angels in order to increase spiritual understanding. The temple vision in the sixth chapter of Isaiah is another source for these ideas. Jewish sages especially revered Elijah, who was taken up in a chariot of fire. They felt that he had been taken up to heaven previously and survived the visit. Chariot imagery also relates to Enoch, who ascended to heaven.

In their visions, these mystics would enter into the celestial realms and journey through the seven stages of mystical ascent: the Seven Heavens and seven throne rooms. Such a journey is fraught with great danger, and the adept must not only have made elaborate purification preparation, but must also know the proper incantations, seals and angelic names needed to get past the fierce angelic guards, as well as know how to navigate the various forces at work inside and outside the palaces.

Jewish mysticism also refers to “Metatron,” God’s exalted servant, who puts God’s words into effect. He is the charioteer, and it is through His holy names that entrance into the heavenly realm succeeds.

The happenings within Latter-day Saint temples are not secret, but sacred; their intricacies too precious to be explicitly stated. Their importance warrants reverence above all else.

And while this quietness entices some to assume more sinister religious rites, these similarities show our rituals aren’t so foreign. Latter-day Saints that have been through the temple will confirm: elements from each of the aforementioned rituals echo in Mormon ritual. 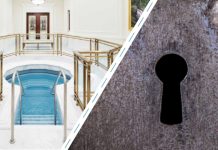