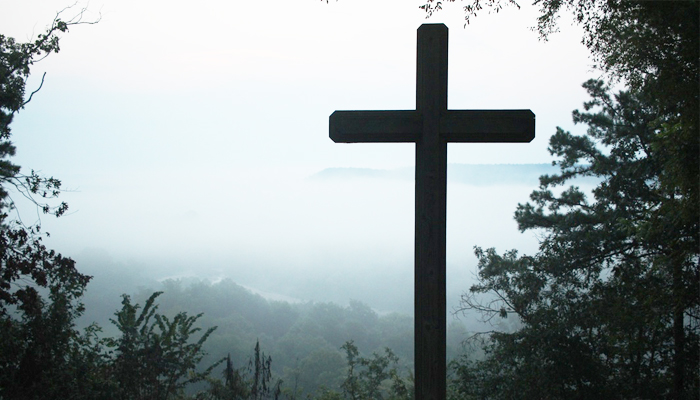 The cross had to be one of the most ominous symbols thinkable to anyone during the life and ministry of Christ. It was more than just a means of implementing capital punishment. It was intended as a violent, frightening deterrent to crime.

Crucifixions were performed in public places (not on hills distant from cities) in order to ensure that their message resonated clearly with the people living under Roman rule. I have reflected at times about what is must have been like for Christ to live quite literally in the shadow of the cross, knowing what fate was in store for him. The thought of the cross had to haunt Him.

How Christ Transformed the Cross

How odd it is, then, that the cross has been so transformed in the collective consciousness of Christianity. Even though Mormons do not currently use the cross in our meetinghouses or temples, it is still a powerful image in our faith. The Bible and the Book of Mormon both use the cross as an image both of the burdens of mortality and a symbol of Christ’s sacrifice and atonement on our behalf. Along with the rest of the Christian world, we teach Christ, and Him crucified.

For me, the cross was the first symbol of Christianity that I was exposed to or understood. I did not grow up in the Church (I was baptized as a Lutheran as an infant and was surprised to learn as an adult that I was still on their roles. Even when I told them I was now Mormon, they still let me purchase life insurance under ridiculously reasonable rates). My parents had a golden crucifix hanging about their bedroom door, and I remember as a toddler being fascinated by it. It was my introduction to Jesus Christ, and as a result, the cross is an image that I hold dear.

But how did the awful lethality of the cross transform into a symbol of hope and salvation? I have sometimes heard LDS people challenge the symbolism of the cross, often by analogy. “If Christ had been killed in an electric chair,” goes the argument, “would people walk around with images of Old Sparky hanging from our necklaces?”

Honestly, I think people would. And I wouldn’t have much of a problem with that.

Prior to Calvary, the cross was without a question a monument to terror. But the moment that the precious blood of Christ touched the torturous wood of Golgotha’s cross, the deadly device was forever transformed. Because Christ died on the cross, but rose again three days later, the cross no longer typified finality and hopelessness. It became a part of the resurrection story, a sacred site where Christ completed the work of His redemptive atonement. The risen Christ defeated forever the power of the cross to instill fear. Instead, it became a beacon of hope. Because of the touch of the Master, the cross was transformed forever.

How the Cross of Jesus Christ Transforms Us

To me, the significance of that transformation is what it makes the cross important to me. If Christ’s atonement had the power to transform something frightening and evil, a stark symbol of death, into something that billions of people have recognized as a symbol of life, hope and salvation, then what can Christ do with me? If His grace was sufficient to sanctify the image of something as awful as the cross, it certainly must be sufficient to sanctify me. I have made plenty of mistakes in my life, many of them scarlet, but I have never been so far gone that my life would be seen as a symbol of death and oppression. If He can completely reverse the imagery of the cross, then what can He do working with slightly better material?

In this way, I do not see the cross as a symbol of the death of Christ, in opposition to the imagery of the empty tomb (although I do understand why President Hinckley made that distinction). Instead, I see the cross as a symbol of the “real world, right now” aspects of the atonement of Christ. It is a reminder of the gospel of transformation, in which the grace of Christ can change our very natures in this life, and by doing so give us hope for greater happiness and joy here and now.

It further reminds me that the key to this transformation is the Savior’s sacrifice, and that any hope in this life is tied inextricably to being touched by the blood of the Lamb. Without the transformative power of the atonement, we have no ability to overcome our less noble natures and return to living in harmony with our Heavenly Father’s plan. It is a reminder that my goal is not to be perfect, but to be perfected in Christ. Without that dark day in Cavalry, there is no light.

Each of us is touched in different ways by spiritual imagery. For some, a particular painting of Christ will stir up feelings of reverence and devotion. For others, the “Choose the Right” shield from our Primary days will have the same effect. And for some, especially those who converted to the LDS Church later in life, the cross is still a powerful motivator to greater devotion. In my view, if it helps, it can’t hurt. And to my mind and spirit, the cross stands as a witness that God can make something of me, and that through Christ I can aspire to be more than I am today. Something holier. Something more devoted. Something transformed by the touch of Christ.

How have you accessed the “here and now” power of the Atonement to transform your life?