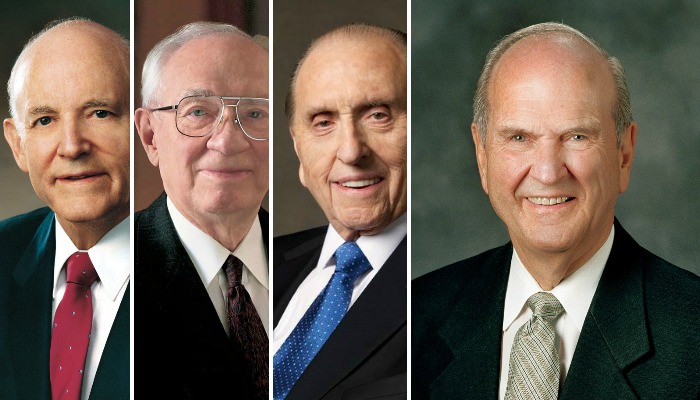 We believe the prophet reveals God’s will to the world. And he really does! But how exactly does that happen? Does God’s will control every single aspect of the Church and its operation? Is every Church policy the revealed word and will of God? Does God always give the prophet details instructions? Let’s dive in and learn a few things about revelation.

1. The will of God is seldom revealed to you or the prophet through dramatic, miraculous experiences

We’ve all heard this before, but do we actually believe it when it comes to our church leaders? Do we really believe that apostles receive revelation in much the same way that you and I do? Elder David A. Bednar explained this principle expertly:

We as members of the Church tend to emphasize marvelous and dramatic spiritual manifestations so much that we may fail to appreciate and may even overlook the customary pattern by which the Holy Ghost accomplishes His work. The very ‘simpleness of the way’ (1 Nephi 17:41) of receiving small and incremental spiritual impressions that over time and in totality constitute a desired answer or the direction we need may cause us to look ‘beyond the mark’ (Jacob 4:14).

I have talked with many individuals who question the strength of their personal testimony and underestimate their spiritual capacity because they do not receive frequent, miraculous, or strong impressions. Perhaps as we consider the experiences of Joseph in the Sacred Grove, of Saul on the road to Damascus, and of Alma the Younger, we come to believe something is wrong with or lacking in us if we fall short in our lives of these well-known and spiritually striking examples. If you have had similar thoughts or doubts, please know that you are quite normal.

Visions, revelatory dreams, and angelic visitations can (and do) happen, but they are the exception to the rule, even for prophets and apostles. Most often, revelation to the First Presidency, Quorum of the Twelve, auxiliaries, stake presidencies, bishoprics, and other leaders happens as those leaders prayerfully counsel together and move forward with decisions based on their (hopefully inspired) best judgment. Oftentimes this is how “the will of God” is determined. The Church handbook agrees,

Councils provide a means for leaders to come together in unity and faith to collectively seek the Lord’s will.

This principle is also evident in the book of Acts, chapter one. The apostle, Judas, is dead. Christ is gone, too. The apostles realized there was a vacancy in their Quorum of the Twelve. Here’s how they figured out who the new apostle should be (pay special attention to the underlined portions):

And they appointed two, Joseph called Barsabas, who was surnamed Justus, and Matthias.

And they prayed, and said, Thou, Lord, which knowest the hearts of all men, shew whether of these two thou hast chosen,

That he may take part of this ministry and apostleship, from which Judas by transgression fell, that he might go to his own place.

And they gave forth their lots; and the lot fell upon Matthias; and he was numbered with the eleven apostles.

These verses make a couple of things very clear:

So did God choose Matthias, or did the eleven choose Matthias? The faithful answer: Both. The eleven counseled together, made a decision, and God, as far as we know, approved. The same thing happens in the modern Quorum of the Twelve. They meet every week in the Salt Lake City Temple and counsel together in an effort to reveal the will of God. When the council is completely unified in their decision, they move forward. Here’s an incredible video of Elder Henry B. Eyring describing his first experience in one of these meetings:

2. There’s not a right or wrong decision in every scenario

The eleven apostles chose Matthias to replace Judas. Does that mean Barsabas was a wolf in sheep’s clothing? Was Barsabas incapable of fulfilling the apostolic calling? Not necessarily. He probably would have done a great job. Sometimes decisions aren’t always black and white. Sometimes there’s more than one right answer. Maybe the Lord would have been fine with either Matthias OR Barsabas.

In modern times both Elder Gong and Elder Suarez were recently called to the Quorum. Does that mean they were the only individuals on the planet the Lord was OK with? Probably not.

Oftentimes the Lord makes a need known (“hey, there’s a vacancy in the Quorum”) and He leaves it up to us to prayerfully make the best decisions we can. Then, He’ll either support the decision, or not. And that happens in a variety of ways. The response might be…

Sometimes in response to prayers, the Lord may guide us down what seems to be the wrong road—or at least a road we don’t understand—so, in due time, He can get us firmly and without question on the right road. Of course, He would never lead us down a path of sin, but He might lead us down a road of valuable experience.

Throughout Latter-day Saint history we’ve been led down many “roads of valuable experience,” and surely there will be more to come.

3. The Lord will not “command in all things”

In Doctrine and Covenants section 58, the Lord (kind of ironically) makes His will very clear:

For behold, it is not meet that I should command in all things; for he that is compelled in all things, the same is a slothful and not a wise servant; wherefore he receiveth no reward.

Verily I say, men should be anxiously engaged in a good cause, and do many things of their own free will, and bring to pass much righteousness;

For the power is in them, wherein they are agents unto themselves. And inasmuch as men do good they shall in nowise lose their reward.

But he that doeth not anything until he is commanded, and receiveth a commandment with doubtful heart, and keepeth it with slothfulness, the same is damned.

The Lord does not command the prophets “in all things,” and that’s OK! They’re doing many things of their own free will and bringing to pass much righteousness. The Lord isn’t just trying to tell us things, He’s trying to teach us things. Part of helping us fulfill our divine potential is teaching us how to make decisions on our own. Sometimes, that means we (and the prophets) are going to make mistakes. That’s how learning goes.

There are 341 hymns in the current English Latter-day Saint hymnal. Did God command that each one specifically should be in the hymnal? Probably not. Are you rebelling against the will of God if you don’t like some of the hymns? Probably not.

God (thankfully) does not micromanage every detail of the Church.

Revelation is an essential characteristic of Christ’s church. Our modern prophets have years of experience with revelation. They know what it is and how to recognize it when it comes. But you and I receive revelation in much the same way that they do. As we continue to refine our understanding of revelation, we will also refine our understanding of how Christ’s restored church operates. In a time of great religious turmoil, this is vital to our spiritual well-being. May God bless us in our efforts to draw closer to him through the divine gift of revelation.