I recently splurged and spent $1.50 on a book at Deseret Industries. It’s called Dead Sea Scrolls and was published by the San Diego Natural History Museum back in 2007. While flipping through it, I came across something delightfully unexpected. But before I explain what the surprise was, let’s talk about Alma.

For almost 200 years now, critics have taken various stabs at an assortment of names used in The Book of Mormon. Criticism of the name Alma, however, is unique. Why? Because apparently, Alma is a girl’s name.

What the critics have to say about Alma

Criticisms show up in a few different places that I was able to track down. This first criticism comes from a book called The Maze of Mormonism, by Walter Martin (published in 1975):

The next two examples come from the same writer—Robert McKay. One was published in The Utah Evangel and the other in The Inner Circle. Both publications were related, and part of an evangelical effort to draw people away from The Church of Jesus Christ of Latter-day Saints from the late 1970s until the early 1990s. Both publications are similar in content and essentially echo what The Maze of Mormonism had to say about Alma, albeit with more linguistic detail. 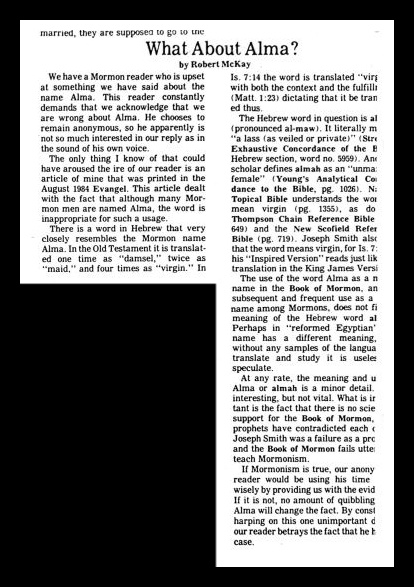 The final criticism is another article from The Utah Evangel. Something tells me they reeeally weren’t very fond of Latter-day Saints. Again, it’s the same old story: 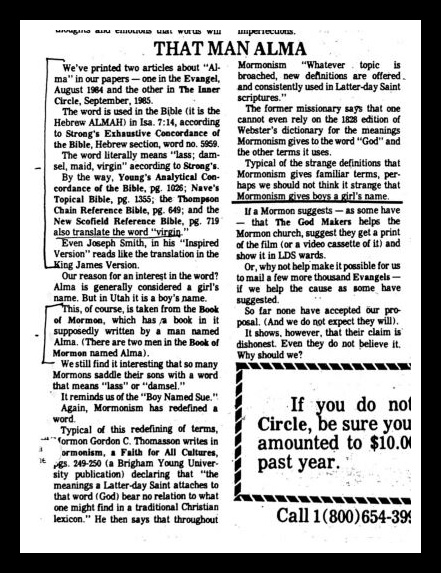 More recently, this same argument showed up in a book called 40 Mormon Beliefs and What the Bible Says, by Pastor Gabriel Hughes (published in 2016, I believe).

Throughout the Book of Mormon, there are multiple ways Smith displayed a lack of understanding regarding languages. For example, Alma, for whom the book of Alma is named, is a Hebrew name which means “Betrothed Virgin.” It would not have been the name of a man.

The argument is simple

What the critics were trying to say was loud and clear: Everyone and their dog knows that Alma is a girl’s name. The Book of Mormon can’t possible be true because Alma is not an authentic male name—especially not in Hebrew. Joseph Smith must have made a silly, but damning mistake. Case closed, right?

Near the west bank of the Dead Sea lies what is now known as the Cave of Letters. It got it’s name from a series of archaeological explorations that occurred there in the early 1960s, when archaeologists discovered dozens of early Jewish documents. Many of the documents were letters between revolt leader Bar Kokhba (Son of the Star) and his followers, dating to about 134-ish AD. The specific letter we’re interested in is the Papyrus Bar Kokhba (5/6Hev 44). This is the papyrus I stumbled upon in my DI purchase. I’d love to include a picture of it here but unfortunately it’s copyrighted and I’m scared of getting in trouble.

Anyway, while the message of the letter is of little importance for the purposes of this article, there was one line of the translation that stood out to me:

Alma son of Judah. As it turns out, Alma isn’t as feminine a name as critics might have thought. And indeed, the authors of my new book (who, as far as I know, are not Latter-day Saints) concede the point:

This piece is of particular interest to the Latter-Day Saints, as one of the names mentioned in the fourth line of the text, ‘Alma son of Judah,’ is the oldest-known occurrence of this name that is also found in the Book of Mormon.

Another description of Bar Kokhba 44 from biblicalreproductions.com (again, as far as I can tell, not a Latter-day Saint source) also addresses the topic:

One of the men mentioned in this historical record is Alma son of Judah. This certainly provides evidence that the name Alma was used as a male name and not exclusively female, as it was earlier assumed.

And so, once again, The Book of Mormon manages to outlast its antagonists, successfully waiting patiently for research to catch up with revelation.