Scripture Book of Mormon Are You a Nephi or a Laman?: Understanding the Descent into Apostasy 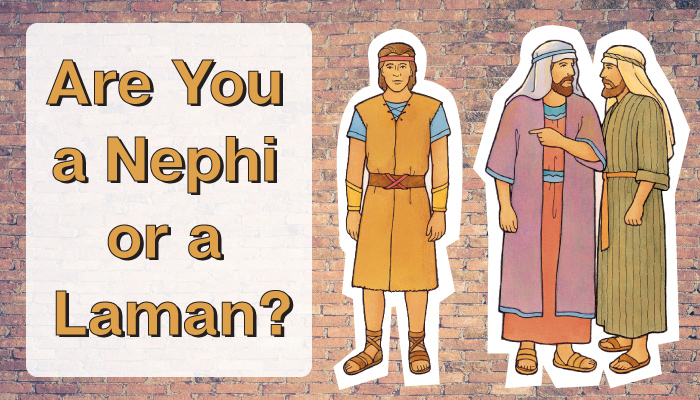 In the world of Nephi and Sam on one end of the spectrum and Laman and Lemuel on the other, everybody should want to be like Nephi, but are you? Before you claim you’re totally like Nephi, practically a clone because you’d never try to “get rid” of your brother or father, really think about the question. Or rather, think about Laman. Before you get all judgmental, let’s take a look at who this guy really was:

I hate to have to say it, but Laman wasn’t all bad. In fact, if you can ignore his murderous tendencies—I know it’s hard—he seems like any rebellious teenager: sullen, moody, unenthused about church. He also, albeit grudgingly, followed many of his father’s dictates; he had some good traits:

Laman left Jerusalem with his family (1 Nephi 2:5). He wasn’t particularly pleased he had to leave, but who would be? Imagine your father got a new job, and you had to move. Not only did you have to leave your friends and home, but you also had to leave your awesome house AND your dad was taking a pay cut, so goodbye riches. Yet, he left.

Went Back for the Plates

Lehi sent his sons back to Jerusalem to fetch the Brass Plates (1 Nephi 3:4). True to form, Laman pitched a fit, but he went back for the plates. He probably dragged his feet and whined the whole time, but he went back. Imagine your dad saying that you had to go back for the family scrapbooks, but it wouldn’t be that easy. You’d have to wrest or trick them from the grasp of a distant family relation who may try to kill you.

The Lord commanded Nephi to build a boat (1 Nephi 17:8), and Laman helped. To be fair, Nephi had to more or less force Laman into helping. Yet, can you imagine your brother saying, “Yeah, I’m supposed to build a boat. Even though I don’t know the first thing about them. By the way, you and your family are supposed to get inside it and sail across the ocean.” Honestly, I’d be a bit leery, too.

Before you think that I advocate for Laman (and Lemuel), I fully admit that Laman was not a good person. He tried to kill his brother on multiple occasions. He was more or less forced into any righteousness and scared into repentance. If you want to remember what real obedience is like—as opposed to the grudging, forced obedience of Laman—look at Nephi:

The examples of Nehi’s goodness are limitless. This serves to show the differences between a true follower of Christ and one just going through the motions.

The difference between Nephi and Laman is stark. The question then is, what went wrong? What led Laman, born of goodly parents, to go from a difficult person who did what was asked although he really didn’t want to and made sure others knew it, to a man who actively sought the destruction of his brother? Don’t look at the big, obvious things, but the little things that Laman did and didn’t do. It’s these little things that start the descent into apostasy.

It starts with murmuring: against parents, against church leaders, against righteousness: Laman “did murmur in many things against their father, because he was a visionary man,” (1 Nephi 2:11). And this is only the beginning (as far as we know) of his murmuring. In essence, he complained not only because his father made them leave their home, but because a prophet of God made them leave Jerusalem. He murmured when he had to go back for the plates, when they traveled in the wilderness, when Nephi built the boat…pretty much Laman seemed to do little but complain. In contrast, Nephi didn’t murmur, even when Lehi murmured as they all struggled to find food in the wilderness.

Laman lacked faith in not just his father or a prophet of God, but in God Himself: “And they did murmur because they knew not the dealings of that God who had created them” (1 Nephi 2:12). He lacked faith to such a degree that even after an angel appeared to them, he said, “How is it possible that the Lord will deliver Laban into our hands? Behold, he is a mighty man, and he can command fifty, yea, even he can slay fifty; then why not us?” (1 Nephi 3:31). This lack of faith continues to pop up, often hand-in-hand with murmuring, throughout the years; he meets each new obstacle with fear, not faith. Nephi had faith in the Lord, as seen by his willingness to obey the commandments.

Every Mormon boy and girl are taught from the cradle to read the scriptures and pray. We use these to things to inquire of the Lord, build a testimony, and receive personal revelation. While Nephi was quick to inquire of the Lord—receiving the vision of the Tree of Life in response—Laman was not. In fact, when Nephi asked if Laman and Lemuel had inquired of the Lord for understanding, they said, “We have not; for the Lord maketh no such thing known unto us” (1 Nephi 15:9). So now, Laman doesn’t only lack faith, but he doesn’t even bother to ask God because he doesn’t believe he’ll receive an answer.

Not only did Laman have certain expectations of his role in the family—a type of pride which we can add to the list—but he used his position to practice unrighteous dominion. He physically and verbally abused his brothers (1 Nephi 3:28), seized control of the family (on several occasions), and sought to rule: “For behold, we will not have him to be our ruler; for it belongs unto us, who are the elder brethren, to rule over this people” (2 Nephi 5:3). Ironically, it’s this pride and wickedness that made Laman unworthy to exercise his firstborn privilege, causing Nephi to step into the role of the teacher.

So, are you a Nephi or a Laman? Do you obey grudgingly or with your whole heart? Do you murmur or heed the word of God with a song in your step? Laman didn’t just go from being a troubled child to a man with murderous tendencies. He descended into the depths of darkness because he neglected the little things; he allowed himself to murmur and then disobey and then exercise unrighteous dominion. On the other hand, Nephi had faith and obeyed, prayed and studied the scriptures. He did those little things that Laman didn’t, and those little things made all the difference. If you find yourself murmuring or not wanting to obey, remember what Elder Neal A. Maxwell said about Laman and Lemuel:

“If, in some respects, they seem to be undeveloped characters, it is because theirs was a haunting emptiness, which could have been filled by the ‘love of God.'”

Just allow yourself to be filled with the love of God and keep doing the little things, and you’ll find your way.