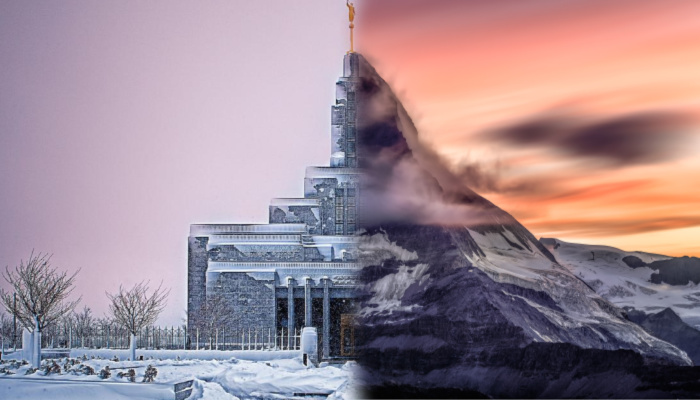 As you know, there are some things we covenant not to talk about outside of the temple. But contrary to what some may believe, that list is really quite short and very specific. Most of what happens in the temple is totally open to respectful, reverent discussion.

This article, of course, does not mention anything on that shortlist. As for the rest, I’ve tried to use my best judgment in discerning what details are appropriate to write about. The reader may find comfort, though, in the fact that most everything this article deals with actually shows up right in the pages of The Book of Mormon.

A quick review of the endowment

In the endowment ceremony we’re taken on a journey through the three “pillars of eternity” as Bruce R. McConkie described them. The Creation, the Fall, and the Atonement of Jesus Christ. The whole ceremony is focused on how Jesus Christ redeems us from the Fall and brings us back into the presence of God. Keeping your temple experience in mind, let’s take a look at what happened to the brother of Jared in Ether 3, a verse or two at a time (all emphasis added).

And it came to pass that the brother of Jared … went forth unto the mount, which they called the mount Shelem, because of its exceeding height, and did molten out of a rock sixteen small stones; and they were white and clear, even as transparent glass; and he did carry them in his hands upon the top of the mount, and cried again unto the Lord, saying:

PAUSE. Whenever a prophet visits a mountain (especially an “exceedingly” tall one) we need to pay attention. Sister Linda K. Burton has taught,

The Lord has often used mountains as a sacred place to teach His servants sacred things and reveal unto them His works and His will for His beloved children. The scriptures contain accounts of Nephi, Moses, the brother of Jared, and the Savior Himself going up to a mountain to commune with our Heavenly Father. Temples are the mountain of the Lord’s house in our day.

When the brother of Jared begins to cry “unto the Lord,” he’s doing it (for all intents and purposes) in a temple. Also, pay attention to the white stones he takes with him. We’ll return to that imagery towards the end of this article.

Related: Why Was the Temple Endowment Such a Strength to the Pioneers?

O Lord, thou hast said that we must be encompassed about by the floods. Now behold, O Lord, and do not be angry with thy servant because of his weakness before thee; for we know that thou art holy and dwellest in the heavens, and that we are unworthy before thee; because of the fall our natures have become evil continually; nevertheless, O Lord, thou hast given us a commandment that we must call upon thee, that from thee we may receive according to our desires.

PAUSE. Did you catch it? Immediately, the brother of Jared hits on a major temple theme. He shows the Lord that he understands one of those “pillars of eternity,” the Fall. “…because of the fall our natures have become evil continually…”

PAUSE. There are a few noteworthy things going on here. Jared is standing before God (the pre-mortal Christ, in this scenario), but initially cannot see him. God is obscured by a veil until He extends His hand through it, which the brother of Jared is able to see (God’s finger, at least).

And the Lord said unto him: Because of thy faith thou hast seen that I shall take upon me flesh and blood; and never has man come before me with such exceeding faith as thou hast; for were it not so ye could not have seen my finger. Sawest thou more than this?

And he answered: Nay; Lord, show thyself unto me. And the Lord said unto him: Believest thou the words which I shall speak? And he answered: Yea, Lord, I know that thou speakest the truth, for thou art a God of truth, and canst not lie.

And when he had said these words, behold, the Lord showed himself unto him, and said: Because thou knowest these things ye are redeemed from the fall; therefore ye are brought back into my presence; therefore I show myself unto you.

PAUSE. After our protagonist’s faith is tried and found true, he is “brought back into [God’s] presence.” God revisits the Fall and explains that the brother of Jared is redeemed. There’s pillar number two: the atonement of Jesus Christ. We get even more in the next verse:

Behold, I am he who was prepared from the foundation of the world to redeem my people. Behold, I am Jesus Christ. I am the Father and the Son. In me shall all mankind have life, and that eternally, even they who shall believe on my name; and they shall become my sons and my daughters.

PAUSE. More atonement instruction. It’s the only power by which we can be brought back into the presence of God. Only one pillar left we haven’t addressed yet.

PAUSE. Ah. There it is. The Creation.

And because of the knowledge of this man he could not be kept from beholding within the veil; and he saw the finger of Jesus, which, when he saw, he fell with fear; for he knew that it was the finger of the Lord; and he had faith no longer, for he knew, nothing doubting.

Wherefore, having this perfect knowledge of God, he could not be kept from within the veil; therefore he saw Jesus; and he did minister unto him.

PAUSE. Approaching God (who is obscured by the veil) with certain knowledge, interacting with God, and leaving with more (or perfected) knowledge should sound familiar. That’s not to say that exactly what happens in our temples is happening here, but the imagery is strong, especially when the Lord is saying things like: “…ye shall treasure up the things which ye have seen and heard, and show it to no man.”

And behold, these two stones will I give unto thee, and ye shall seal them up also with the things which ye shall write.

PAUSE. Here, the Lord is describing Urim and Thummim (or seer stones). The brother of Jared carried 16 white stones up mount Shelem and presented them before the Lord. The Lord touched them and they gave forth light. It’s unclear whether the two stones the brother of Jared received in these verses were two out of the group of 16, or two entirely different ones, but the imagery is compelling in either scenario in light of scriptures from Revelation and the Doctrine and Covenants:

“He that hath an ear, let him hear what the Spirit saith unto the churches; To him that overcometh will I give to eat of the hidden manna, and will give him a white stone, and in the stone a new name written, which no man knoweth saving he that receiveth it.”

“Then the white stone mentioned in Revelation 2:17, will become a Urim and Thummim to each individual who receives one, whereby things pertaining to a higher order of kingdoms will be made known;

“And a white stone is given to each of those who come into the celestial kingdom, whereon is a new name written, which no man knoweth save he that receiveth it. The new name is the key word.”

And when the Lord had said these words, he showed unto the brother of Jared all the inhabitants of the earth which had been, and also all that would be; and he withheld them not from his sight, even unto the ends of the earth.

And the Lord said unto him: Write these things and seal them up; and I will show them in mine own due time unto the children of men.

PAUSE. Wow, this chapter wraps up with quite a vision! “…all the inhabitants of the earth which had been, and also all that would be…” It reminds me of a similar vision that Moses had, also upon an “exceedingly high mountain.”

And it came to pass that Moses looked, and beheld the world upon which he was created; and Moses beheld the world and the ends thereof, and all the children of men which are, and which were created; of the same he greatly marveled and wondered.

These visions may also hearken back to that last pillar of eternity that we tackle first in our temples: the Creation.

Temple ordinances in the Book of Mormon

As an aside: To my knowledge, Joseph Smith never taught from Ether 3 as a temple text. If Joseph was an impostor—if he simply made the Book of Mormon up—then (it seems to me) he purposefully laced this chapter with temple imagery, and then never brought it up again. After putting in so much work to seamlessly weave his invented practices into the Book of Mormon, you’d think he would have called at least some attention to it.