Faith Scripture This Interpretation of “Without Natural Affection” Is Going to Change How You... 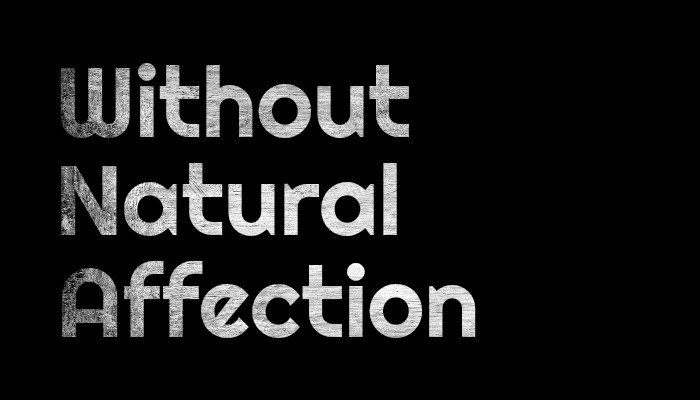 You’ve heard the phrase before. It comes from this scripture from the Bible:

This know also, that in the last days perilous times shall come.

For men shall be lovers of their own selves, covetous, boasters, proud, blasphemers, disobedient to parents, unthankful, unholy,

Without natural affection, trucebreakers, false accusers, incontinent, fierce, despisers of those that are good,

Having a form of godliness, but denying the power thereof: from such turn away.

Traditionally, the prophets have interpreted “without natural affection” as having to do with issues pertaining to the Law of Chastity. Of course, they are correct. The interpretation I offer is by no means meant to replace what the prophets have said. My interpretation may not have even crossed the original author’s mind, but hey, we’re supposed to “liken all scriptures unto us, that it might be for our profit and learning,” right? Here’s a perspective I find enlightening:

I’ve thought about how to explain this other interpretation through words, but I think I’ve found something that’ll work much better. Check out this clip from The Space Between Us:

I love this clip. It illustrates beautifully what “without natural affection” could mean.

Maybe “without natural affection” simply refers to our inability or unwillingness to express affection naturally.

The girl, Tulsa, has a hard time expressing her affection naturally. As she says, “People don’t go around saying what they feel whenever they feel it. They have guards and shields and … other metaphors.”

We live in a culture where vulnerability is considered a weakness. It’s not. It’s just not. Vulnerability is a strength. Gardner, the boy in this scene, was raised by astronauts on Mars. He’s been far away from the cultural conditioning and norms we earthlings experience throughout our lives. As such, “natural affection” comes, well, naturally.

Unfortunately, these norms restricting natural affection run deep. You may recognize them within the walls of your own home—the most important place for affection to abound.

First of all, I apologize for the Frozen reference, but therein lies a valid point. How often do we sincerely tell our parents and siblings that we love them?

How often do we sincerely tell our husband or wife how much they mean to us?

If we see somebody wearing cute shoes, do we tell them? Or would that be too weird?

If somebody crashes their bike across the street, do we run to their aid or keep walking?

Of course, there should be reasonable bounds to what we say and do. It’s probably inappropriate to tell your opposite-gender coworker how attractive they look in that skirt, but you get the point. “Without natural affection” looks like unreasonably withholding sincere, positive sentiment.

Why is “without natural affection” a problem?

Answer: It creates distance. It creates emotional barriers and feeds apathy. It can be the foundation of communication or trust issues.

At its root, withholding natural affection happens because of fear. We’re afraid to be vulnerable. We’re afraid of what the other person may do with the feelings we’ve so dangerously offered them. Will they think you’re creepy? That’s a very real possibility.

If expressing love to family members isn’t a normal thing for you, chances are they’ll either think you’re in danger or you desperately want something from them. The simple fact that those are likely reactions is evidence that this scriptural prophecy has come true.

How do we overcome it?

Frankly, I don’t know. You don’t see that phrase very often online, but I don’t know. Saying “you just do it” might be oversimplifying things. I’m not confident in giving the answer because I also am trying to overcome the Tulsa within.

But I have noticed one group of people that don’t seem to have such a problem with natural affection: Children. They seem pretty willing to express themselves however and whenever they feel moved to do so (for better or worse). Maybe that’s why the scriptures ask us to humble ourselves and “become as little children.”

Whatever the solution, it’ll take effort. It’ll take determination. It takes action, sincerity, and vulnerability. It takes the willingness to let your love be stronger than the cage the world is trying to put that love in.