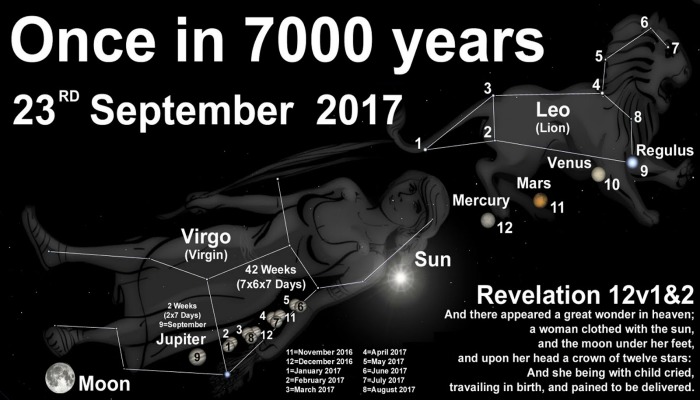 On September 23, 2017, a sign appeared in the heavens that is causing great excitement among Christians looking for biblical fulfillments. (A few thought the world would end that day, but now we know it didn’t.) The sign is described in the Book of Revelation 12. Verses 1 and 2 read as follows:

And there appeared a great wonder in heaven; a woman clothed with the sun, and the moon under her feet, and upon her head a crown of twelve stars:

And she being with child cried, travailing in birth, and pained to be delivered.

The symbolism of The Feast of Trumpets is the call to awake, arise, and gather, because the wicked are being separated from the righteous. (Joseph Smith received the gold plates from the angel Moroni on The Feast of Trumpets.) The 10 Days of Awe are set aside for final repentance in preparation for the final judgment. They culminate on Yom Kippur, the Day of Atonement. (Read more about these high holy days in my book, Days of Awe, available at Amazon.com.)

That Other Thing about The Feast of Trumpets

The Hebrew name for this holiday is Rosh HaShanah, which means “head of the year.” Before the Exodus from Egypt the Jewish year began in September. God changed the religious year around when He established the high holy days. He placed Passover in the spring and commanded the year to begin at Passover. But the civil year begins in September with Rosh HaShanah, and that’s when the calendar year changes. The holiday celebrates earth’s creation. So indeed, Trumpets heralds in the beginning of a new era.

In order to figure out the importance of this heavenly sign for us as Mormons, we should look at the Joseph Smith translation of Revelation 12. The JST moved verse 5 before verse 3 and the words “to devour her child as soon as it was born” were changed to “to devour her child after it was born” seeming to imply that the dragon’s attack was at least a little time after the birth.

Joseph Smith made other changes, so Revelation 12: 3 – 8 reads like this:

And she brought forth a man child, who was to rule all nations with a rod of iron; and her child was caught up unto God and his throne.

And there appeared another sign in heaven; and behold, a great red dragon, having seven heads and ten horns, and seven crowns upon his heads. And his tail drew the third part of the stars of heaven, and did cast them to the earth. And the dragon stood before the woman which was delivered, ready to devour her child after it was born.

And the woman fled into the wilderness, where she had a place prepared of God, that they should feed her there a thousand two hundred and threescore years.

And the dragon prevailed not against Michael, neither the child, nor the woman which was the church of God, who had been delivered of her pains, and brought forth the kingdom of our God and his Christ.

Neither was there place found in heaven for the great dragon, who was cast out; that old serpent called the devil, and also called Satan, which deceiveth the whole world; he was cast out into the earth; and his angels were cast out with him.

So the woman symbolizes the Church of God (picture the eternal church, not just the earthly one), and she delivers God’s kingdom and His Christ. This could mean that there are multiple fulfillments of this heavenly sign, not just one. The fulfillments of God’s prophecies are in the details. If you want to get into them, go to this very detailed article.

The Sun and the Moon in Virgo

The Greeks saw Virgo not as an angel, but as a woman with very large wings. In verse 14 of Revelation 12 it says that the woman was given the wings of an eagle. The scripture tells us of a vision of a great constellation of a woman with the sun in her clothing and the moon under her feet. The sun appears in the clothing of the Virgin for a couple of weeks each year in late September.

About once every three years the moon appears as a thin evening crescent under the feet of the woman at the same time the sun is in her clothing. The moon is underfoot of the Virgin on the Feast of Trumpets about once per decade. So nothing unusual so far.

Heralding in the Millennial Reign?

Just as The Feast of Trumpets heralds the new Jewish civil year, the sign in the heavens could be heralding the coming of Christ’s kingdom on earth. Jupiter is in the position of being born the way the heavens present themselves on September 23rd. Jupiter represents both God the Father and also is the King planet. Jupiter spends a 10-month loop in the womb of the Virgin before its “birth.”

The following illustration from calendarist John Pratt shows a more accurate positioning of heavenly bodies during the event.

For us in the United States, verses 15 and 16 of Revelation 12 sound like current events:

And the serpent cast out of his mouth water as a flood after the woman, that he might cause her to be carried away of the flood.

And the earth helped the woman, and the earth opened her mouth, and swallowed up the flood which the dragon cast out of his mouth.

Floods have plagued us this year. We have had tornadoes and various floods from simply too much rain. We have a series of hurricanes and others forming. But with these heavenly “signs,” it’s much easier to discern their meaning after prophecies have been fulfilled. We will have to look back on this from our millennial comfort and say “Yes, indeed, that was a sign,” or we can say, “Wow, we saw signs everywhere, but now we see more clearly, and that was no big deal.”

Was Nero the Anti-Christ? 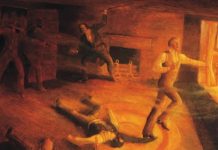