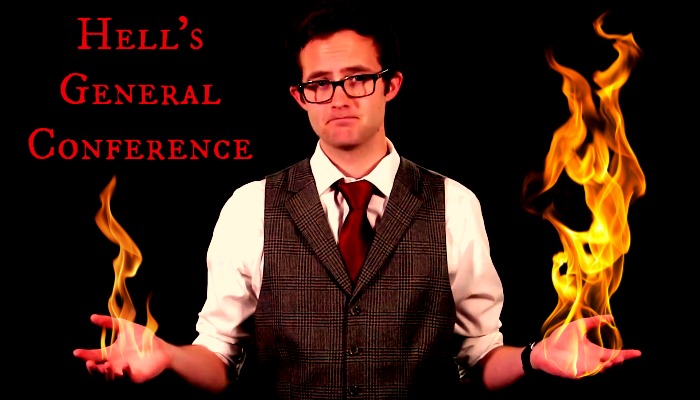 It’s not every day you get to hear from Satan at Brigham Young University, but there’s a first for everything.

The speech you’re about to see, titled “Hell’s 9,378th Semi-Millennial General Conference,” explores what a motivational speech from Satan to an audience of demons might sound like. David Snell gave the speech at Brigham Young University late last year as a finalist in the annual Sloan Speech Showcase.

Peppered with humor, Satan (Snell) reviews past successes and failures with his demons and gives them some morbidly helpful advice as they prepare to continue their life’s work: To destroy the souls of humankind.

The speech quickly garnered a few thousand views after Snell’s sister posted it online. It also gained some traction on Twitter at the time of its release.

Here’s a transcript of the speech:

“Friends, brothers, fellow demons, welcome to Hell’s semi-millennial general conference. Now, I know in the past I’ve spoken rather devilishly towards you, but from the bottom of my pit, these last few decades have been excellent.

Twenty-three and a half million people in the United States are addicted to drugs or alcohol. That’s comparable to the mortal population of Texas[1].

About 20 million children in the same country are living without their biological fathers at home[2]. That’s comparable to the total populations of Minnesota, Michigan, and Wisconsin combined. Surely they must know by now that it’s not politicians who raise a nation, it’s the parents.

Finally, over the last 38 years there’s been a 24% increase in indifference towards the Sabbath Day[3].

We managed to turn church buildings into tourist locations for badness sake.

Yes, our Father’s word has been published—but who actually reads it? Yes, there are prophets walking the earth today but who is honestly convinced they need them? Yes, there is absolute truth out there, but who has the ability to see it?

We’re good at what we do, and for the next few minutes I’d like to emphasize a few strategies relevant to the 21st century that I think we need to brush up on.

First of all, stop trying to get mortals to bite a hook baited with another hook. No more Hail Mary temptations! The era of Woodstock and Mardi Gras are over. The best are only getting better and the worst are already ours. I ask you, my fellow advertisers, are we incapable of building a simple mouse trap? All you need is a little cheese. Tell me about cheese. Is cheese poisonous? Does cheese explode when mortals chew it? No.

Cheese in and of itself is delicious, or so I’ve heard. Only those choking on the meatloaf of denial want to be fed pure lies. Now, I know you don’t like to dabble in truth, but for the majority of your clients you’ll need to smother your lies with the alluring cheese of truth. These mortals, though childlike, are not fools. Remember: The most effective demon is not the most daring, but rather the most deceitful.

Now, the natural mind is an incredible thing, and more often than not it works for our benefit. The prophet Alma spoke of planting seeds—yes, I read the scriptures. Always know your enemy—and planting seeds is what we also must do, my vile companions. The mind is fertile yet unstable ground. Plant fear and watch as it grows into detestation and hate before your eyes. Plant doubt and nourish it into rebellion. Plant a grudge and watch it destroy a soul. Plant and watch.

Also, don’t forget to attack your targets where and when they least expect it. No soul ever fell that expected the fatal blow. Everyone has their weakness. Cain’s was greed, David’s was lust, Judas had his money. These mortals think they’re so resilient. That their misplaced faith is unbreakable. We know better. What happens when tragedy strikes? What happens when a friend betrays them? What happens when these Whited Sepulchers disagree with their God? In the shadow of calamity, confusion and inconvenience, there will we be. Waiting.

Finally, never underestimate the power of apathy. We don’t need to get mortals to rebel against God, we need to get them to ignore Him.

Demons: Garnish your lies in sparkling truth. Plant seeds. Aim for their blind spots. And remember that indifference is much more powerful a tool than insubordination ever will be. Now go, my cunning friends, and build my kingdom.”