Nearly 13,000 youth of The Church of Jesus Christ of Latter-day Saints participated in a cultural celebration at LaVelle Edwards Stadium on June 6th in Provo, Utah.

The cultural celebration in honor of the Payson Temple opening took place the day prior to the temple dedication. Despite a storm that rolled in just prior to the performance, the youth were still able to take the field, singing and dancing ancient and modern stories from the Church’s history. The theme for the event was “Fill the World with Love.”

Mormon Newsroom reports that President Henry B. Eyring told the youth during the celebration, “You will never forget the satisfaction as you discovered that through effort and determination you can do more than you thought possible.”

The Payson Temple will serve members from 27 stakes in Southern Utah Valley and Central Utah.

3 Things That Stand out in the New Young Women Theme 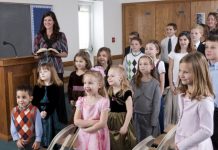