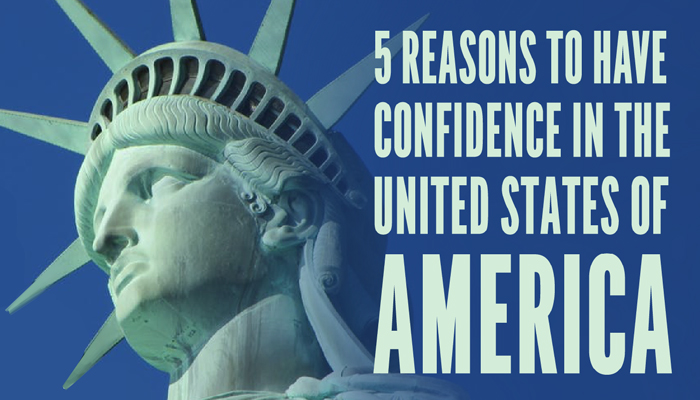 It’s easy in a society of political corruption, media intrigue, and general wickedness, to lose faith in the United States of America. The sanctity of marriage and family have broken down, children are growing into adults without traditional values, and crime seems to infest every neighborhood in the country. Although there is, indeed, much to mourn, there is also much to praise. Goodness and service and charity run rampant; people seek to do good. If this isn’t enough to put a song in your heart, then here are some more reasons to have faith and confidence in the United States of America and its people.

“Originally it was simply a portion of that large, single land mass which God in his creative process called ‘Earth’ and which, when completed, was pronounced ‘good.’ (Gen. 1:10.) Whatever its name and geographical configuration, however, it was from the beginning a land of divinity as well as a land of destiny.”

In fact, God declared it as a place of freedom as long as those who live here “but serve the God of the land, who is Jesus Christ” (Ether 2:12). The freedom of this land is so important that God sent forth many to it from the Jaredites to Christopher Columbus who—love him or hate him—recognized the importance of his mission as quoted by President N. Eldon Tanner:

“Our Lord unlocked my mind, sent me upon the sea, and gave me fire for the deed. Those who heard of my emprise called it foolish, mocked me, and laughed. But who can doubt but that the Holy Ghost inspired me?”

Remember then, that this is the Promised Land. God has sent those upon her shores to shape and mould her for good in fulfillment of her ultimate destiny.

Among those inspired on the Promised Land were the Founding Fathers, the men who wrote and ratified the Constitution, yet another reason to have faith in America. This document guarantees freedom to all citizens, like freedom of speech and press and assembly. Freedom of religion. President Ezra Taft Benson during the April 1976 General Conference said:

This country has God’s stamp of approval upon it in the form of the Constitution. According to U.S. President John Adams (and quoted by President Benson during the same talk), the Constitution “was made only for a moral and religious people. It is wholly inadequate to the government of any other.” The Constitution at least, with its guarantees of freedom, gives anybody a reason to hope.

3. A Standard of Freedom

With the inspired Constitution leading the way, this country sounds the standard of freedom to the world. America’s creation created a watershed event in the course of history. An event which, buttressed by principles of freedom, has put this country in a position to spread freedom throughout the world. President Joseph F. Smith explained this:

“His hand has been over this nation, and it is his purpose and design to enlarge it, make it glorious … to the end that those who are kept in bondage and serfdom may be brought to the enjoyment of the fullest freedom and liberty of conscience possible for intelligent men to exercise in the earth.”

The Promised Land, the Constitution, and this country’s principles of freedom all boil down to one thing: a great destiny. God established this country for the great purpose of spreading the Gospel of Christ throughout the world. Elder Mark E. Peterson described it thus:

What is that destiny? You will be surprised when I say this, but it is nevertheless true. The destiny of the United States of America is to play an important part in helping to prepare for the second coming of Christ. It is that important. That is the reason the United States was set up.

The preparation for the second coming of Christ depended largely on the restoration of the gospel. There could not be a restoration of the gospel without freedom. God provided this country as the base of his operations in these, the last days, a place where there would be freedom, where he could restore his gospel. Therefore, the United States was given and is yet to be given a great mission in respect to the second coming of the Lord Jesus Christ.

This country remains essential to the Second Coming, to bringing about the concluding chapter of the Earth’s purpose. This country is destined to great things, so have faith during the dark times: God has a plan for it.

Because of this country’s destiny, it can never fail. It needs to remain free in order for the Gospel to spread throughout the world. President Harold B. Lee in the October 1973 Deseret News prophesied:

“The Constitution will stand even if it must be saved by the elders of this Church. This nation, founded on the principles laid down by men whom God raised up, will never fail. I have faith in America, and you and I must have faith in America if we understand the teachings of the gospel of the Lord Jesus Christ.”

If President Lee’s prophetic prose isn’t enough to convince you, then read what President Brigham Young said in his discourses:

“When the day comes in which the Kingdom of God will bear rule, the flag of the United States will proudly flutter unsullied on the flag staff of liberty and equal rights, without a spot to sully its fair surface; the glorious flag our fathers have bequeathed to us will then be unfurled to the breeze by those who have power to hoist it aloft and defend its sanctity.”

So when you start to wonder about the Untied States, about her corruption and evil, remember the good within it. God didn’t destroy Sodom and Gomorrah until the righteous left. This country is fairly saturated with righteousness. Good members of the LDS church, good citizens, and good people regardless of religion uphold the banners of righteousness. As long as we do the same, this country will succeed.