Hasten Centenarian says, “You’re Never Too Old” To Be Baptized 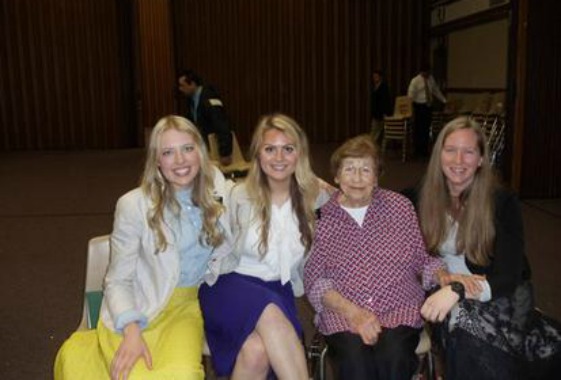 The Deseret News brings us this story about a 100 year-old convert to The Church of Jesus Christ of Latter-day Saints. Madeline Baldwin was baptized just a week after she turned 100.

For those who know the story of Madeline Baldwin, a recent convert to The Church of Jesus Christ of Latter-day Saints, the message is clear.

“You’re never too old,” the 100-year-old Baldwin said with a voice that’s still clear and strong.

Baldwin was baptized into the LDS Church in May, just one week after her 100th birthday. Although she had to give up her morning coffee and get over her fear of water before she was baptized, her lifetime of familiarity with the LDS Church and the encouragement from her returned-missionary grandson made the transition easy.

“I felt wonderful,” she said, recalling the feeling of coming out of the water. “I felt good. I felt like that’s where I should be.”

Madeline Baldwin was raised Catholic but was introduced to the Mormon faith by her husband, Ralph, who was a member of the LDS Church. She attended church with him regularly, and their three children were baptized. Eventually, the whole family stopped going to church. One son, Mike, returned to the faith and raised his own children in the gospel.

But Ralph Baldwin had planted a seed of love for the faith in his wife’s heart.

“I love the people,” she said. “I feel very much at home there. The first time I went to church with Ralph after we were married, I just felt like I was one of those people.”

Still, it took Baldwin decades to decide to get baptized.

“She’s always told all of us the reason she couldn’t be baptized is that God put her on the earth as a Catholic, and if she changed she was afraid he would get mad at her,” said Debbie Baldwin, Madeline’s daughter-in-law.

Although all three of Madeline Baldwin’s children were baptized at age 8, Debbie’s husband Mike was the only one to return to the faith after the family became inactive.

After Debbie’s son Michael Baldwin returned home from his full-time mission in 2005, he began giving his grandmother missionary discussions and talking to her seriously about joining the church

To read the rest of the story, go to deseretnews.com.