This article was originally published in Deseret News by Hikari Loftus. Below is an excerpt.

Some might call it luck or coincidence that Elder Dan and Sister Colleen McArthur showed up early for a district meeting on a Thursday morning.

But the fact that they were there when a man showed up with a box of priceless missing memories was nothing short of divine in the eyes of my family.

“I think it’s more than interesting that the man who brought the box to church came at a time when 99 days out of 100, there wouldn’t be anyone there,” Elder McArthur said.

The McArthurs, of Mesa, Arizona, were serving in the Pennsylvania Philadelphia Mission of The Church of Jesus Christ of Latter-day Saints in 2014. The man who visited the church building that morning had found a box that had been left behind in a house he’d purchased in Delaware.

After a quick inspection, it became obvious the box belonged to someone of the Mormon faith. So the homeowner found a local church to deliver the box to in hopes that someone could return it to the rightful owner.

Flash back 13 years when my family packed up our home in Sandy and moved across the country to Pennsylvania. When the moving truck arrived, it became clear that there were a number of items missing. Among those was a single box containing all of my father’s personal history and records. We’re talking everything from elementary school photos and church ordination certificates to eight volumes of journals and other LDS mission paraphernalia from his time in the Japan Central Mission.

We assumed theft or carelessness and concluded that the box of records, which would hold no value for anyone else, had most likely ended up in the garbage.

Unlike the other missing items that were mourned and soon replaced, the lost records left a sting that did not lessen with time. In fact, as the years passed and his memories became foggier, we often heard my father lament the loss of those journals and the information they had taken to the grave.

None of us would have ever dreamed they were sitting in a stranger’s basement, untouched, for 13 years. Or that my father’s mission memories would find their way into the hands of missionaries who were in the middle of making their own.

To read the rest of the account, go to Deseret News. 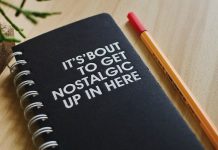 How to Journal When You HATE Journaling