Hasten Mission Field Mormon Missions: It’s not Where, It’s How 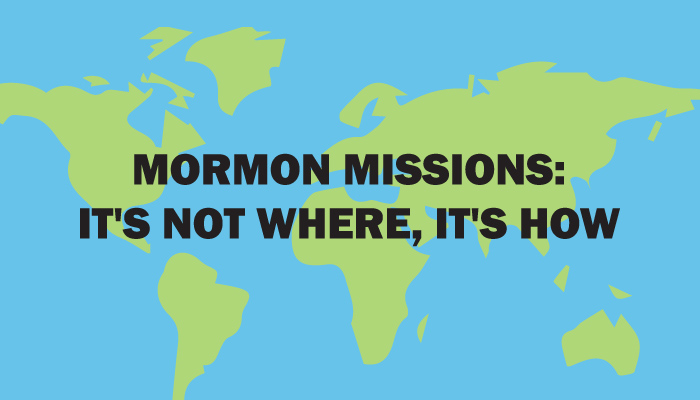 My eyes scanned the page at a rate that was probably fast enough to rival the speed of light before I finally found it: I would be serving in Denver, Colorado.

I received my mission call on March 28th of 2013. I had several friends over at my BYU – Idaho apartment, all of whom insisted that the postage stamp’s price indicated that, hallelujah! I was going to be called out of the States, and I was Skyping my family. When I read the words out loud — that I would be serving in the Colorado Denver North Mission, English speaking — time stood still. I didn’t know how to feel. I knew it was right, but I instantly felt like everyone was disappointed for me. It seemed to me as though all of my friends were thinking, stateside? English speaking?! I went into my bedroom and cried.

Flash forward to a couple of days later and all kinds of people were offering a mixed variety of congratulations and condolences. I received responses such as, “My older brother served there and he absolutely loved it!” to “It’s okay that you’re just serving in Denver.” Just Denver. The more I heard that — and trust me, I heard it a lot — the more distressed I became. What was so wrong with serving in the States, anyway?

I mentally started making a pros/cons list about my call. I mean, I could go back and visit people after my mission. That was nice. And I wouldn’t have to learn a new language. Ugh, never mind, that one’s a con — how cool would it be to learn a new language? I silently envied my best friend, who had gotten called to Mozambique, Africa, where she would speak Portuguese. I bet no one had told her it was okay that she was serving in just Africa.

After spending hours alternating between feelings of joy and frustration over my call, I decided that I needed to talk to the wisest man I know: my dad. I called him and expressed my grievances about everything that had happened since I had received my mission call. I ranted, “Why is everyone so disappointed that I’m going to Denver?”

Because he’s a good dad, my father listened to me talk and vent and whine, and then he said something that totally changed the way I viewed missionary service. “Amy, it’s not a vacation.”

He let that sink in for a minute and then continued, “I think sometimes kids want to go to the most exotic place or learn the most exotic language because it seems cool. But it’s not a vacation. It doesn’t matter where you go. God’s children are everywhere and they all need the gospel just the same.”

Over the weeks leading up to my MTC date, I reflected on that counsel over and over. The more I thought about it, the more I began to recognize, Why should it matter where I go? It certainly didn’t matter to my Father in Heaven if my mission was so-called “exotic” or not. I realized that He doesn’t care whether we speak Arabic or Spanish or Finnish. What matters to Him is who needs us; the people we can touch. He cares about His children receiving the gospel and partaking in divine ordinances. I knew that Heavenly Father knew me just as He knew all of His children, and He was going to send me exactly where I needed to go.

And He did. Colorado was absolutely, 100% perfect for me. Often I even feel that maybe Colorado didn’t need me as much as I needed Colorado. I needed both of my mission presidents. I needed to learn from the people I taught and the members of the wards I served in. I needed to meet each of my incredible companions, to forge life-long friendships with them.

God’s children are everywhere. They’re in Zimbabwe. They’re in England. They’re in Australia and America and Peru. And all of His children, no matter where they are, need what we have. They need the joy and peace that the gospel brings. The people that I served in Denver needed to know that they could be with their families forever just as much as the people in my friend’s mission in Africa needed to know it.

In his October 2011 General Conference Talk, “You Matter to Him,” President Dieter F. Uchtdorf stated, “The Lord doesn’t care at all if we spend our days working in marble halls or stable stalls. He knows where we are, no matter how humble our circumstances. He will use—in His own way and for His holy purposes—those who incline their hearts to Him.”

Truly, the Lord isn’t concerned with what your friends think of your mission call. He doesn’t care if you serve in your own country or if you have to take a 16-hour plane ride just to get to your assigned field. I suspect that one day, when we stand before the Savior, He won’t ask, “Where did you serve?” Instead, I believe He will ask, “How did you serve?”

It took me a while to realize it, but I’m grateful that I learned quickly that it didn’t matter if I saw the Taj Mahal or the Colosseum on my mission, because that’s not what a mission is about. It’s about loving the Savior, learning from the Spirit, and helping others to come unto Christ.

And we can do that anywhere.