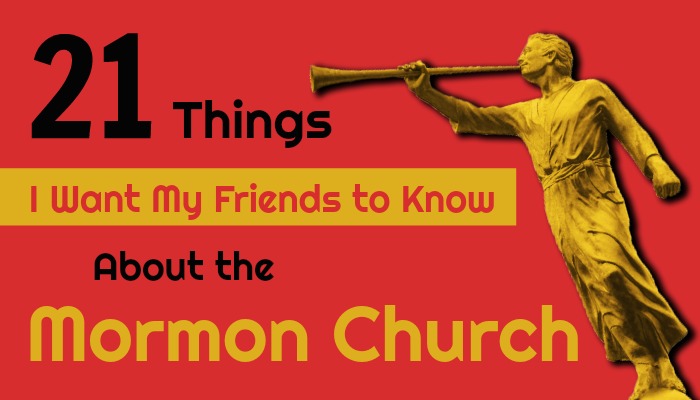 Hey friends! I’m a Mormon. But you already knew that. What you might not know is what Mormons actually believe. Never fear! Because I know you’ve just been dying to learn more about us, I’ve compiled a helpful list of some of Mormonism’s most fundamental, basic beliefs and helpful factoids (why do I love that word so much? Factoids, factoids, factoids).

If you have any questions (and I hope you have questions) feel free to comment on this post, chat with Mormon missionaries online, or better yet, talk with them in real life (YIKES!). You could also just ask any friendly neighborhood Mormon roaming around.

1. Mormons are called Mormons because of The Book of Mormon

We regard The Book of Mormon as scripture, just like the Holy Bible.

Well okay, eager reader, I will!

2. “Mormon” was an ancient Christian prophet who helped write and compile The Book of Mormon (hence the name)

Like the Bible, The Book of Mormon has many writers. Nephi, Alma, Helaman, Moroni, etc.

We think so too. If you don’t have The Book of Mormon, you can read it here or get a free hard copy here.

3. The Book of Mormon differs from the Bible in that it was written by prophets from the ancient Americas, rather than the ancient Middle East

That said, they both teach about Jesus Christ and his gospel. That’s why we read both the Bible and The Book of Mormon. Pretty sweet, eh?

4. In fact, the real name of the Mormon Church is The Church of Jesus Christ of Latter-day Saints

I know, it’s a mouthful. Now you understand why most people just call us “Mormons.”

5. Mormons believe God and Jesus Christ appeared to a boy name Joseph Smith and prepared him to recover and translate The Book of Mormon

Well that was a bombshell of a statement. Read all about his experience RIGHT HERE.

Well of course you don’t, it sounds crazy! Sort of like Noah building an ark, or Moses talking to God through a burning bush. But guess what? We believe that stuff really happened too!

6. Smith didn’t just “start” a church, but rather he restored the church Christ Himself established in biblical times

You know, the one with apostles and prophets and all that. Peter, Matthew, John, etc.

Great question! After Christ was crucified, the church sort of fell apart. The apostles were killed, doctrines were lost and, without apostolic leadership, teachings were interpreted differently, resulting in the advent of many, MANY separate religious sects. Hence the need for a Restoration (see previous point).

7. A prophet leads the Church today just as one always has in past eras

His name is Thomas S. Monson, and I also want him to be my grandpa.

8. Mormons believe marriages and family continues after death and into eternity

There is no line about “till death do us part” in a Mormon wedding ceremony.

9. Those ceremonies take place in Mormon Temples, like this one

Fun fact: On top of almost every Mormon temple is a statue of the “angel Moroni.” Before he was an angel, Moroni was a Book of Mormon prophet (Mormon’s son, in fact). He helped compile The Book of Mormon.

10. Mormons believe that God the Father, Jesus Christ and the Holy Ghost are 3 separate beings united in 1 single purpose

That purpose: “To bring to pass the immortality and eternal life of man.”

It helps when Joseph Smith witnessed 2/3 of the Godhead.

11. Mormons believe that you and I are spirit children of God, and that we lived with Him before mortal birth

12. Mormons believe the purpose of life is to be happy and prepare to return to live with God

13. Part of that preparation requires what Mormons call “ordinances,” like baptism

But a legitimate baptism has to be performed by someone with the authority to do so. Sort of like how only a police officer is authorized to give you a ticket.

14. Mormons believe this authority is only found within the LDS Church

They call it “Priesthood” authority.

Yeah, it’s an extremely bold statement! But there’s a way for you to know if it’s true or not. Keep on reading (it’s at the end).

15. Mormons believe that it is only because of and through Christ’s ultimate sacrifice (which they call the Atonement) that any of us have a shot at “being saved”

Without Christ, the whole plan falls apart. There’s nothing any of us could have done to save ourselves. Saved from what, you might ask? From this.

16. Mormons believe everyone who has ever lived on earth will one day be resurrected

We will all have resurrected and perfected bodies of flesh and bone, just like Heavenly Father and Jesus Christ now have.

17. Mormons believe in the 10 Commandments, but also believe that God can reveal additional instruction or commandments whenever He wants

That’s one reason why modern prophets are so important. Amos 3:7, “Surely the Lord God will do nothing, but he revealeth his secret unto his servants the prophets.”

18. For example, you probably already know that Mormons don’t smoke tobacco, take illicit drugs, nor do they drink alcohol, coffee or even tea

Well thank you. That practice is based on a revelation commonly known as The Word of Wisdom that Joseph Smith received from God. It’s essentially a health code that you can read more about right here.

19. Mormons have church services every Sunday; Visitors are more than welcome

Find a church building near you right here. Don’t forget to bring the whole family!

20. You’ll hear several prayers while you’re there; Mormons always end their prayers in the name of Christ, followed by a simple “amen.”

Great! See, we’re not all that different. That said, surely there have been plenty of points here that you do not agree with. How can you know if any of it is true?

21. The Book of Mormon is evidence that everything you’ve just read about it is true. Give it a shot. Investigate it. Read it. Ponder it. Pray and ask God if it’s true. If it is, that’s a big deal

If you’ve made it this far into this list, chances are something has caught your attention. Hopefully, it’s curiosity. Hopefully, it’s sincere interest. Hopefully, it’s the brave question, “Is any of this actually true?” If that is the case, consider taking the next four minutes and 39 seconds to watch the video below. It’ll give you some powerful insight into the life of Joseph Smith as you begin your investigation of The Book of Mormon.