Life 5 Things I Gave Up to be a Happier Mom

This article was originally published in Utah Valley 360 by Elyssa Andrus. Below is an excerpt.

Just kidding. I love gluten. And sugar. I would never give those things up. In fact, a nighttime pint of Ben & Jerry’s is often my reward for surviving another summer day with four kids at home. But there are a few things as a mom I’ve had to quit, and I’m much happier since I did. For example, I gave up:

1. Trying to have my daughter look like a Gap Kids advertisement

A friend recently told me that my precious, 4-year-old, ONLY girl looks like a hot mess at least 50 percent of the time. Back when she was a headbanded and bejeweled infant, that observation would have devastated me. But now I can laugh and admit my friend is right. Said daughter spends her days wearing a swimsuit, tiara, flip-flop and cowboy boots. And I kind of love it. The day I stopped caring that my boys “nice” clothes were clean basketball shorts was a blessed day in the Andrus household. The any-outfit-goes philosophy has been liberating, and it’s totally cut down on the laundry (that I’m not doing anyway).

To read the rest of the article, go to Utah Valley 360. 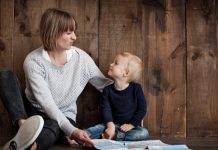