Life I Answered “How are you?” Honestly for One Week 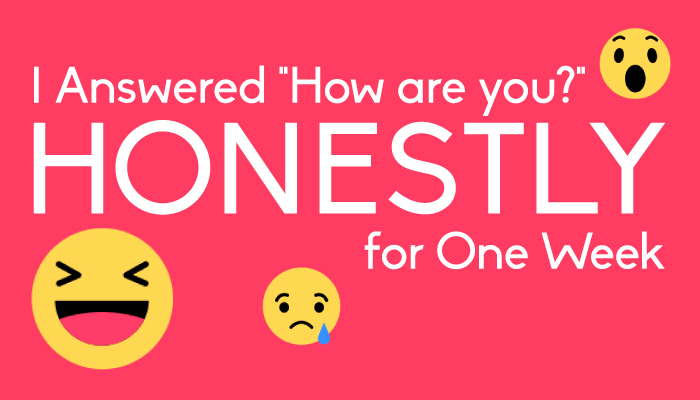 People ask “how are you?” a lot. And I’ve always assumed it was more cultural ritual than sincere question.

But, for some reason, when I renewed my temple recommend and answered if I was honest with my fellow men, I thought of how often I had white-lied those encounters away. I hardly thought that disqualified me, but still, I started thinking. What would change if I actually told all the random people who asked how I was really doing.

So, I began a one week experiment.

Here were the rules I followed every time someone asked how I was, or something similar.

I needed to buy blistex at the grocery store. While checking out the cashier asked how I was doing. My first go. I said, “I’m happy.”

This isn’t a totally unusual answer for me, and it happened to be true at the time. She smiled and finished checking me out. My day wasn’t perfect, I had a few minor frustrations at work, so I wasn’t happy all day. But everytime someone asked on the phone I was honestly feeling “Excited,” “Really Good,” “Awesome.”

As unexpected as I thought these answers would be, everyone simply carried on with the conversation. I suspect it had something to do with the fact that the answer was generally positive.

When I first woke up this morning, my wife asked me how I was. I said grumpy. I’m always grumpy when I first wake up. But she rolled her eyes.

She clearly meant “Did you sleep well,” and my answer didn’t address what she wanted to know. Maybe when I don’t “tell the truth,” what I’m really doing is answering the question they meant? For example, most people who ask “How are you?” are really just meaning “Hi” and saying “Fine, how are you?” is like saying “Hi” back.

I was walking back from the park with the kids, and someone was landscaping my neighbor’s yard, and when I drove in, he approached me and asked how I was. I told him “confused about why he came over.” Because this response pushed the conversation forward (he needed to borrow a working weed wacker) he went with it. This was the first time I answered how I was with something that wasn’t upbeat, but it went by without consequence.

The missionaries called on the phone. I told them I was anxious to get back to work, which I would normally never say. But they did respond by going more quickly. So the honesty worked out for me.

Since I work out of my home office, I spent most of the morning without speaking to anyone but my children. So when we did get out to the park, I answered with a curt “fine,” before I caught myself. I wasn’t particularly interested in a conversation, and without thinking “fine” came out to cut off the interaction.

But the more I thought about my answer, the more I realized that I rarely feel “fine.” That’s my default answer to how I am. I think it’s a lot of peoples’ default. But I realized that it’s actually rare for me to be having no emotional life.

I also told my wife I was exhausted when she got home. And I told the potential advertiser I spoke with that I felt hopeful. Neither elicited much response at all. But I was beginning to notice that in order to avoid screwing up again like I did that morning, I was more often checking in with how I was feeling.

This wasn’t necessarily a good thing. If I wasn’t feeling good, I still had to work, and conscientiously take care of the kids. I couldn’t really deal with my emotions, so I wasn’t sure how being aware of them was doing me any good.

I had a playdate today with the Elder’s Quorum President and his kid, who’s a bit older than mine. I really enjoyed our play dates. He was one of the few friends I had made since we moved into the city, and he was very good at making sincere connections with others. Something I struggled with. I really wanted his friendship.

But today, I didn’t want him to come over. We had recently squabbled at home. And my wife was leaving on an extended trip that afternoon, so I felt overwhelmed, frustrated, and guilty for not wanting to be together. I did not want to tell him how I was. And I seriously debated lying if he asked to avoid putting the relationship at risk.

So I didn’t ask him how he was when he arrived, hoping he wouldn’t ask. But he did. So I took a second to see if I was feeling anything different that I could justify saying. I said “overwhelmed” and then explained about the upcoming trip.

It launched a conversation about the trip and what I was going to do that weekend without them there. As concerned as I was, it ended up being entirely painless.

I was also “Happy to be at the park” to the other parent there.

And “Good,” “Still Good,” and “Annoyed you keep asking me” to my three-year-old.

I was at the store again, and the cashier asked how I was. My wife and son had recently left town for a trip. They’d been gone a whole day, and wouldn’t be back for two more. So I told her, “I’m lonely.” She looked right at me. I guess I don’t look cashiers in the eye very often because this felt unnatural. She said, “Me too,” then went back to work. What do you say? Could I just leave it like that? I had to say something else, right? I smiled. She looked back up at me. “It comes and goes, you get used to it.”

I had no idea why this woman felt lonely, what emotional turmoil she dealt with. But I’ll never go to the store the same way again. If I see her next time, I almost have to go back into her line. At least that’s how it feels.

I wish I had gone out more that day, because I was curious how other people would have responded to a sincere negative emotion. But I didn’t. I mostly just worked and played video games since I was by myself. My mom called. I told her I was lonely. She said, “sorry,” and then told me what she was calling about. (She already knew my wife was gone.)

Saturday: No One Asked

I probably didn’t have to go to the store the next day. But I had the house to myself, so if I did by a family size bag of Cool Ranch Doritos I wouldn’t need to share them with anyone. But when I was about to check out I had a decision to make. Should I go to the automatic checkout so I didn’t have to risk having another real conversation with a complete stranger? Or maybe even the same cashier.

And that’s what I did.

I spent the entire day in a cocoon writing and working. And while I did take a stroll around the neighborhood, I got away with nothing more than a wave.

And I realized that the experiment was based on a little bit of hubris. Why was I so sure that so many people cared what I was feeling.

I knew this would be the hardest day of the experiment. So I don’t regret saving it for last. It was also nice that my wife wasn’t there so I didn’t need to risk embarrassing her.

Our branch is very friendly. Very. And since I knew I would be asked how I was half a dozen times before I got to my seat, I needed to be prepared.

I found that I spent the morning trying to put myself in a good mood. I did some exercises. Took an extra long shower, put on some cologne, picked out my best tie.

Because I knew I couldn’t hide my emotional life, I actually took care of my emotional life. It was super easy to do that because I didn’t have any kids to get ready for church, so I’m not sure how relevant that is for the future.

As I walked in, I was able to say that I felt great, invigorated, happy to be there. And because I took care to actually be feeling those things, I had an engaging, spiritually fulfilling experience at church.

I did tell my brother on Skype later that afternoon that I was feeling frustrated at the technology. And he said “woop-te-do” but I’m pretty sure he was just razzing me.

I certainly don’t feel like I have to continue this experiment in order to be “honest with my fellow men.” In fact, as I realized pretty early on, I respond to what people mean by “how are you” rather than the actual words.

But I also don’t regret doing it. I wasn’t creating friendships out of thin air. We simply related to one another honestly based on the relationship we did have.

As unique as we all are, the language we have for our emotional lives are incredibly durable across experiences, and they connect us to people in a way that other people don’t. Most people aren’t interested in emotional vulnerability and can quickly move past what you say. But when I do open myself up, I was available to others in a way I simply wasn’t before.

There is a tremendous amount of empathy in the world. And as we pass by each other holding our emotional lives in secret we miss out on the abundant humanity around us. A cashier and an automated checkout are not equivalent, not even close. 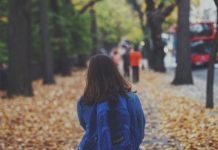 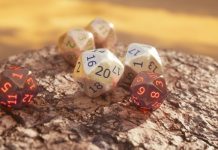 3 Ways Dungeons and Dragons Brings You Closer to God (Yes, for Real) 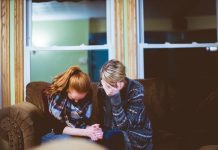