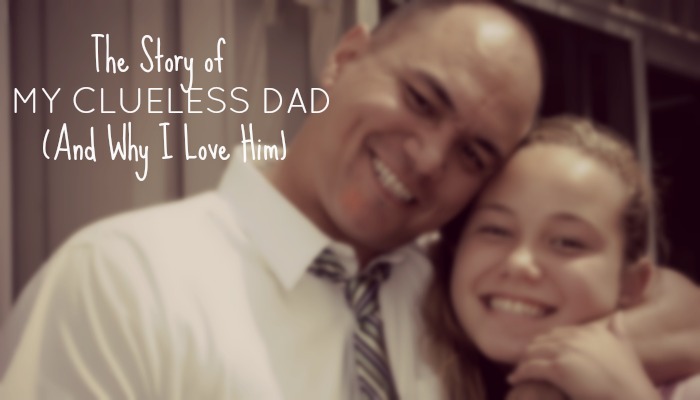 Children are often asked during this time of year, “What is your favorite thing about your dad?”

Of course, many of us aw and ooh over their adorable responses such as, “My Daddy is Superman because he’s always there when I need him.” Or, “My Dad always plays with me and tells me he loves me.”

Ordinary men become a child’s entire world and they carry with them special powers to light up a child, heal boo-boo’s and scare away the monsters of the night.

Over the years my answers have changed and shifted, but for the past few years I’ve found an answer that I love, but that often causes many people to scrunch up their faces in confusion.

“I love that my Dad has no idea what he’s doing.”

My Dad grew up on the North Shore of Hawaii in Laie. As the second to last in a family of eight, he was named the official maid of the house, caring for most of the chores.

When he wasn’t doing the yard work, he was almost always found on the football field or at the beach. I suppose this might have been part of the reason his GPA in high school hovered near a 1.5, but then again, his English wasn’t exactly English either.

Moving from the islands to Ephraim, Utah, he attended and played for Snow College, but his grades and school work ethic led to a semester’s GPA totaling 0.7. Oh yeah. I didn’t think it was possible either. But yep. That’s my Dad.

Soon after that, he met my Mom in a gas station. He asked for her number three times… and she had no idea what he was asking. Pidgin can be very hard to understand.

But they went on a date, and a few more, and after a week, my Dad asked my Mom to marry him.

She laughed and asked, “Shawn, who do you love more, me or Christ?”

He looked at her and chuckled saying, “You, of course, I do not know who He is, nor can He give me a hug when I am sad.”

For my Mom, a convert to the Mormon Church at 12 and recently returned missionary from Chile, she could have easily blown him off, seeing his poor grades, lack of job, and lack of testimony. But she didn’t.

(My sister and I still wonder why.)

“You need to go on a mission. And you need to love God first.”

Luckily, he listened to my mother’s counsel and the promptings of the Spirit and he was called to serve in Salt Lake City, Utah. He went, devoting the full two years to serving and learning to love God. 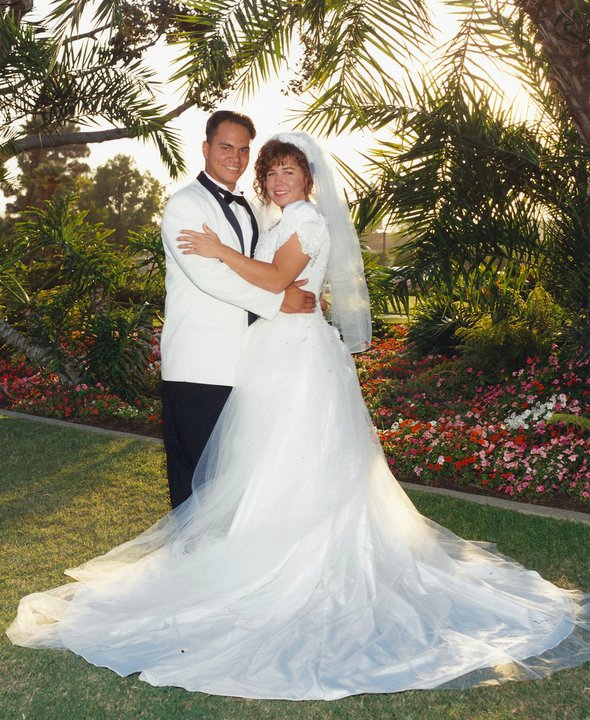 Six months after he returned home, on August 5, 1994, my parents were sealed in the Los Angeles Temple.

But the journey had only begun.

Two years after they were married, I was born, and then followed 4 more children over the span of 12 years. And let me tell you, it’s been a bumpy ride.

You know the usual. Nights filled with throw-up and other bodily liquids. Days of hormones and sibling wars. Morning freakouts when the science projects were forgotten. And Sunday meltdowns when the clothes don’t fit or just didn’t look good. That’s what a family is. Or at least my family.

But to the 20-year-old boy from Laie without an education, without a job, and with only a newly formed testimony, I imagine this feat would have seemed frightening. (That is, of course, if he had known what was coming. Gotcha there Dad.)

He could have easily said, “I know what to do, and this is the way it should be done. So do it. It’s my way or the highway.”

Heck, he could have just as easily said, “I didn’t ask for this,” and walked away to watch some football and relax.

Seeing Dad Through A Different Lens

I remember when I was 12 years old, I was part of a gymnastics team. I absolutely loved it. But I was also felt awkward and out-of-the-loop, as many 12-year-olds do.

My mom often drove me to my practices but this day, my dad decided to drive me. The difference between my mom and dad’s driving is ridiculous. My mom is always on time, and if it looks like we will end up late, she’ll drive in a way that we will be on time, no matter what.

My dad, on the other hand, likes to take his time. Island time. It’s brutal. 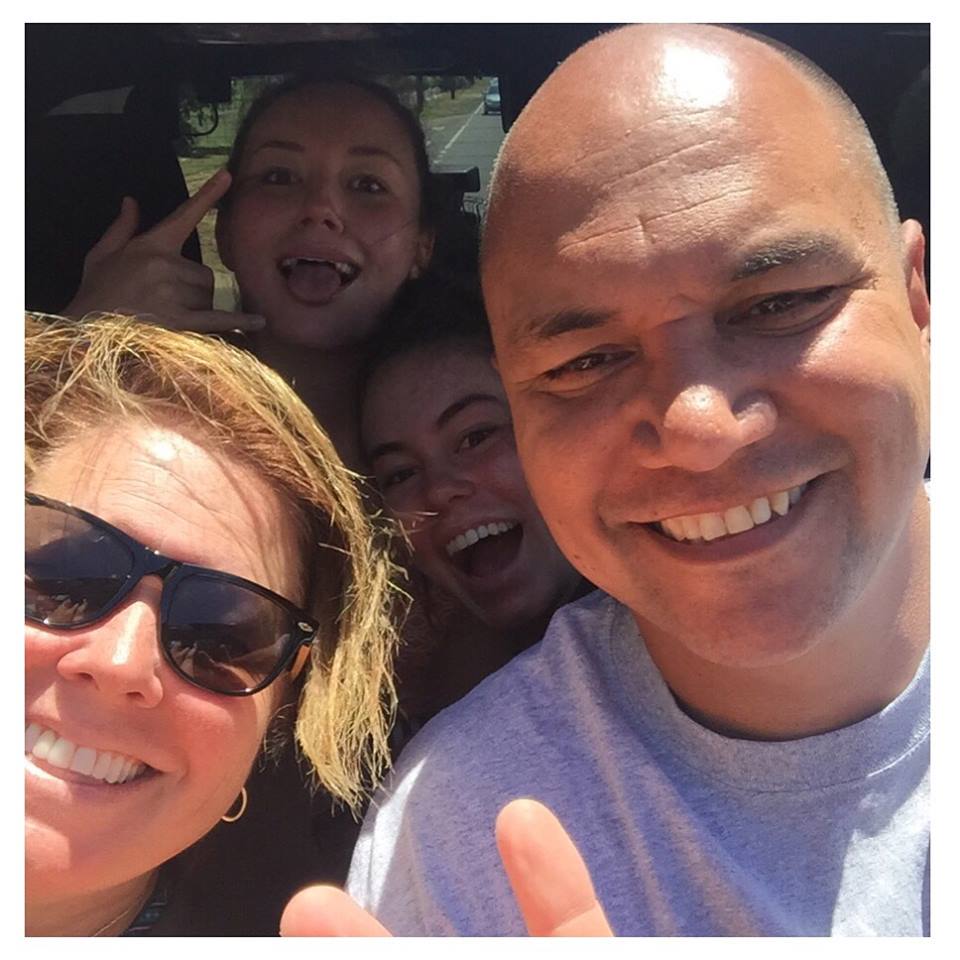 I became more and more angry with each passing minute. And finally, when we pulled into the parking lot, I turned to him and screamed, “I hate you! We are always late and this is so embarrassing! I wish I didn’t even have to go to practice!”

I got out of the car, but suddenly the tears erupted and I slumped to the floor outside the door, overwhelmed and exhausted. My dad slowly moved out of the driver’s seat, picked me up and brought me back inside the car. He lovingly wiped my tears away and then held my face to look at his.

Then he said something surprising.

“Kay, I’m sorry. You’re not usually like this. And your mom has said that your hormones might be coming in. I don’t really know what I’m doing or how to help.”

As a normal 12-year-old girl, I felt awkward when he mentioned hormones, but I also was taken by surprise. How could my dad, the all-wise, all-present, all-knowing father in my home, NOT know what he was doing?

As I’ve gotten older, I’ve seen more of the weaknesses of my father. I see the young, uneducated boy from Laie and I laugh. This isn’t the superhero dad of my childhood.

But just like that day, there have been countless moments in my life when he has admitted he doesn’t understand and together we strive to make life work.

And that’s how I came to adore my father.

Not because he is perfect. Or because he always has the answer. But because he doesn’t, and he taught me that that was okay.

Seeing my father kneel on the ground and beg for understanding and wisdom from God and then get up and ask, “How can we do this together?”— that has been a lesson I will always treasure.

In a world of loud voices, where so many men believe that strength is only found in knowledge and success, I’ve found that some of my Dad’s strongest characteristics are the ones where he has openly admitted that he is weak. I’ve come to see that I respect him most when he is humble and meek.

Humble enough to turn to God often and rely upon His counsel. And meek enough, as described by Elder Bednar, to have a certain spiritual receptivity “to learning from people who may seem less capable, experienced, or educated, who may not hold important positions, or who otherwise may not appear to have much to contribute.”

Someone like a silly young 12-year-old girl who knew almost nothing about life and hormones. (To be honest, not much has changed since then.)

For those who know my dad and have met him, I think they would laugh at this article because, in all honesty, he’s far beyond so many other men around him. A few years ago he completed his doctorate in 3 years and recently was promoted in his job. But what he has taught me is that none of that really matters.

Because ultimately, we all are clueless and lost in this life.

So my dad has shown me how critical it is to love God before anything or anyone else. He has shown me that when we choose to place our confidence in Him, the Eternal Father, who thankfully does know everything, our Heavenly Father mercifully chooses to teach all of us, his silly young children, that it’s okay to be clueless.