Hanukkah is a favorite Jewish holiday that does not originate from the Exodus. Hanukkah carries no Messianic symbolism, because it isn’t a high holy day commanded by the Lord to the Children of Israel. (The high holy days are Passover, Feast of Unleavened Bread, Wave Offering for the Honored Son, Feast of Weeks, Jewish New Year, Day of Atonement, and Feast of Tabernacles.)

Hanukkah lasts for eight days and falls around Christmas-time. (This year, 2016, Hanukkah begins the evening of Christmas Eve, and ends at sundown New Year’s Day.) Children often receive a gift each night. These used to be very small gifts, but lately in the United States, they’ve become bigger gifts.

The Story of Hanukkah

Hanukkah is the celebration of a miracle that occurred about 160 years before Christ. King Antiochus had led a Greco-Syrian alliance in conquering the kingdom of Judah, taking control of the temple as well as the government. Antiochus was very cruel to the Jews and killed many. Antiochus demanded that the Jews worship the Greek gods, that they reject their religion, their customs, and their beliefs.

Some Jews refused and rose up in rebellion. They were led by the Maccabee family — Judah Maccabee and his four brothers, who were simple peasants who became heroes. Judah and his brothers had chosen their own last name. It means “hammerer” in Hebrew.

After three years of bitter fighting, the Maccabees and their followers succeeded in driving out the Syrians and reclaiming the Temple. The Temple had been desecrated by the Greco-Syrians. They had erected statues of Greek gods there, and had sacrificed unclean animals to them. On the 25th day of the month of Kislev, the Temple was cleansed by the Maccabees and ready for rededication.

In every Jewish place of worship, and especially in the Temple, there is a light, called the Ner Tamid, “eternal light.” The lamp for the eternal light was the seven-branched Menorah, like the one below.  Olive oil was the fuel for the lamp.

Once lit, the temple eternal light should never be extinguished, but kept fueled. The Greco-Syrians had extinguished the flame, and the Maccabees family wanted to relight it. Only a tiny jug of temple oil could be found. The oil lamp was filled and lit. The oil was just enough to provide light for one day, but it burned for eight, a great miracle. During those eight days, the Jews were able to obtain more olive oil to keep the lamp burning.

The holiday of Hanukkah commemorates this miracle, as well as the victory over the Greco-Syrians. Hanukkah is the “Festival of Lights,” but the word hanukkah actually means “rededication.” Celebration of the holiday includes gift-giving, parties, singing, holiday foods, decorating, but most of all the lighting of the holiday candles.

The Hanukkah Lamp and Lighting of the Candles

The Jewish every-day menorah has seven branches.  The branches represent the days of the week with the Sabbath. The number seven is holy in Judaism. It represents wholeness, which we tend to call perfection. The Jews believe that God has seven holy attributes which we should emulate. These attributes are symbolized by ancient prophets: Love (Abraham); Justice (Isaac); Mercy (Jacob); Kingship (David); Prophecy (Moses); Priesthood (Aaron); and Righteousness (Joseph).

A hanukiyah can look like anything. The lights can be candles or oil flames. Contests are held in Israeli schools and communities, and at Jewish community centers, to see who can create the most artistic lamp. One interesting winner at my son’s school in Jerusalem was constructed from a gnarled piece of driftwood. The candle-holders were upturned walnut shells. Most of the time, the shamash candle is higher than the other eight, either in the middle or at the right.

Purchase birthday candles for the creation of a family Hanukkah menorah, or have materials on hand for each family member to create their own. Prepare a recipe of Hanukkah latkes (potato pancakes—recipe below), and have applesauce on hand to serve with them, or else cook up a batch of sufganiyot (Hanukkah doughnuts—recipe below). If desired, reproduce the pattern for the Hanukkah dreidel on stiff cardboard and make dreidels for an activity.  Or purchase a dreidel for the dreidel game, instructions below.

After the opening song and prayer, read the history of the holiday found above.

Either assign each family member to create their own Hanukkah menorah, or else brainstorm a design for one, decide what materials are available in the house, and construct one as a family. Light the candles as directed in the history throughout the eight nights of the holiday.

The most traditional game for Hanukkah is spinning the “dreidel.” It is a simple game of chance.  Europeans of all religions used tops for simple games of chance, but dreidel spinning may have a more ancient origin, according to MyJewishLearning.com:

One 19th century rabbi maintained that Jews played with the dreidel in order to fool the Greeks if they were caught studying Torah, which had been outlawed. Others figured out elaborate gematriot [numerological explanations based on the fact that every Hebrew letter has a numerical equivalent] and word plays for the letters nun, gimmel, hey, shin. For example, nun, gimmel, hey, shin in gematria equals 358, which is also the numerical equivalent of mashiach or Messiah!

As a matter of fact, all of these elaborate explanations were invented after the fact.

The dreidel game originally had nothing to do with Hanukkah; it has been played by various people in various languages for many centuries.

Make dreidels from the pattern below or buy a dreidel and play the dreidel game as a family. You’ll have to use your own judgment on this one. No Hanukkah celebration is complete without dreidel spinning, but it’s simple gambling. Use items without value —toothpicks, candies, nuts, pretzel sticks, or raisins, or the like, for the booty.  “Hanukkah gelt” consists of foil-wrapped chocolate coins and are the best choice for dreidel game booty.

To assemble the dreidels from the pattern below, glue or tape the tabs.  Put a stick into the top to use as a handle.  If you don’t cut out the hole in the top, even a sturdy toothpick or match will work. 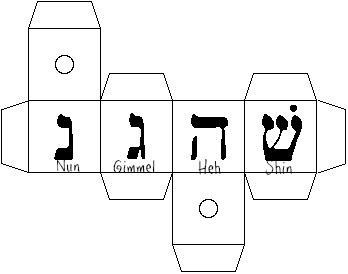 Before you start, players put one token in the middle of the circle to create “the pot.”

Every time the pot is emptied, or there’s only one token left, every player should put a token in the pot.

In some game versions a Shin results in adding three game pieces to the pot (one for each stem of the Shin). This alternative version increases the overall fairness of the game.

If the player is out of pieces, they are either “out” or may ask another player for a “loan”.

Here’s a link for more hints for playing the dreidel game.

Activity #3: Make a Hanukkah Food as a Family

Favorite jelly or jam (not lumpy)

Mix water, sugar, juice, and yeast. Let stand about ten minutes. Melt the shortening and add to the yeast mixture. Beat in the egg yolks and salt. Add flour, mixing with a spoon and then kneading to a soft dough. Let rise about 90 minutes or until doubled in size. (You can leave it on a floured counter-top and cover it with a clean towel, or turn it into a greased bowl and cover it to double.) Roll the dough to about ¼ inch thickness and cut out circles about 2 inches wide. Cover circles with a towel and allow to rise about 30 minutes. Deep fry in hot oil (about 400º) for about 3 minutes, turning once. Cool on paper towels. Pipe a little jelly into the center of each doughnut with a pastry piping tool. Roll in granulated sugar.

Beat the eggs and yolk and add all other ingredients except the butter. Shred the potatoes just before adding them. The mixture will look fairly strange. Heat the butter in a large skillet over medium heat. Tradition holds that the melted butter should be ¼” deep. (Trust me.) Drop the pancake mixture into the hot butter to form 3 inch rounds, slightly mounded. Flatten them with a spatula. Cook, occasionally flattening the pancakes into the butter. Turn carefully when the underside is brown and crusty, especially around the edges. Brown the second side. Keep warm in a warm oven while cooking the rest of the pancakes. Serve hot with applesauce.

The Maccabeats, a Jewish singing group, has produced a fun music video about Hanukkah. They sing, “We’re all about that ‘neis,’ no oil. The word ‘neis’ is Yiddish for the Hebrew word ‘ness’ and means miracle. They are referring to the lack of oil in the temple for the eternal light, or ner tamid.

And here’s a fun article from a Jewish writer on why the relatively minor holiday of Hanukkah is such a big deal. 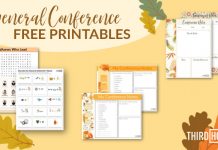 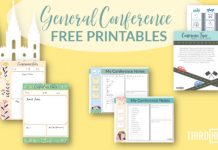 FREE Conference Printables and Activities for Your Family