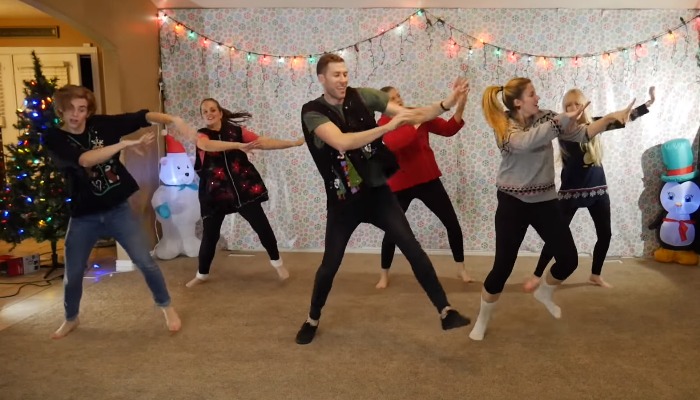 It’s the most wonderful time of the year, and if you’re not feeling the Christmas spirit yet, this video will do it for you. Every year the Orgill family creates a dance video that will practically force you to crack a smile.

This year’s video came out a few days ago and already has a few hundred thousand views under its belt. Without further ado, here it is:

28-year-old Ammon Orgill (the tall guy at the beginning of the dance) started the tradition back in 2012 with his sister, Kalin. “Only five of the siblings were in it the first year, but after they saw how fun it was, everyone wanted to be involved the following year,” Ammon told me in an interview. “None of us are professional or even semi-professional dancers. We’ve never taken a dance class haha. We all (well most of us) just love dancing.”

Despite their lack of professional experience, Ammon and Kalin’s choreography skills are on point. Ammon says it took the family a day and a half to learn the choreography. They filmed over Thanksgiving.

2015’s dance video has been the most successful (so far), racking up over four million views on YouTube. “We were pretty addicted to checking the comments and ‘fan mail.’ It’s been remarkable how the popularity has continued the with the videos the past two years,” Ammon said. But to those of us who have seen the videos, their popularity is hardly surprising. They’re fantastic.

On the wall behind the dancers in the 2015 video you can spy the popular LDS slogan, “Families Are Forever.” And family is what it all comes down to for the Orgills. “Spend time with your family this holiday season! They’re the ones who matter most,” Ammon said.

If there’s still room in your heart for some more Christmas cheer after watching that video, here are their videos from past years: