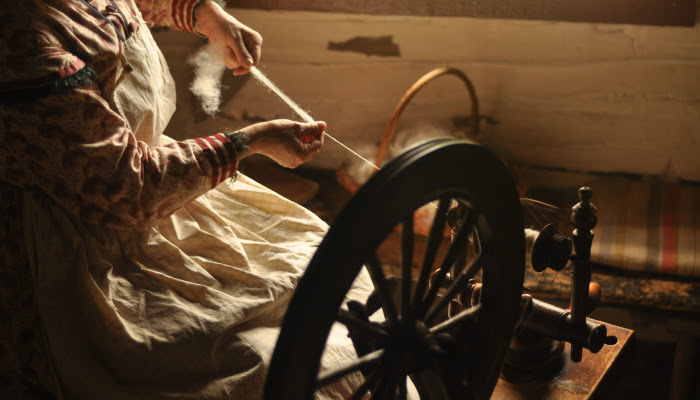 Ever wonder what Christmas might have been like for the Mormon pioneers after arriving in the Salt Lake Valley?

What sort of traditions did they have, did they decorate Christmas trees, go caroling and talk about Santa Clause? Perhaps a bit of research and a look at common Christmas traditions in the US during the 1800’s might give us some insight.

Christmas with the Prophet

LDS.org wrote an article titled “Christmas with Joseph Smith” that gave us some insight into how the prophet once celebrated Christmas when he was in Nauvoo. To start off, the article mentions how Christmas wasn’t really a big holiday at the time (Thanksgiving was actually the real MVP) and how that resulted in it being celebrated differently:

Christmas was … much less festive in those days than it is today. Records show that the Latter-day Saint children in Nauvoo even attended school on December 25th because Christmas was not a legal holiday in the state of Illinois. Christmas trees were not common, and very few of the Saints gave Christmas gifts or cards. Rather than focusing on giving and receiving gifts, the Saints in the 1840s spent Christmas evening with family and friends enjoying good food and sometimes festive music and dancing.

The prophet himself recorded a memorable Christmas in 1843 that started early when carolers stopped by his home around 1 o’clock in the morning. Then as the day continued, He and Emma hosted roughly 50 couples over for dinner.

LDS.org quotes Joseph writing: “Monday, December 25—A large party supped at my house, and spent the evening in music, dancing, &c., in a most cheerful and friendly manner” (History of the Church, 6:134).

Possible Christmas Traditions For the Pioneers 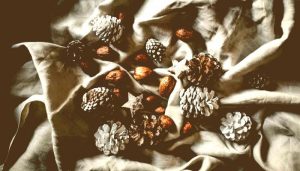 According to HistoryToday.com, in 1832, “Harriet Martineau identified Christmas trees to become one of the most familiar symbols of the American Christmas,” and by the 1850’s many Americans had fallen in love with the German custom.

In the 1830’s and especially the 1850’s, setting up Christmas trees blew up in popularity as town squares began to sell them and the media introduced the custom to a wider audience. By 1856, the first Christmas tree appeared in the White House during the presidency of President Franklin Pierce.

However, OrnamentShop.com’s history of the tree teaches us that “The first truly national Christmas tree was inaugurated by President Woodrow Wilson in 1913, but it was not until President Calvin Coolidge moved the tree to its present location near the White House – and ceremoniously switched on the newly installed electric lights – that the idea of an “official” tree took hold.”

Does that mean that the Pioneers for sure didn’t have a Christmas tree? Probably, since the idea was still pretty new to them after arriving in the Salt Lake Valley in 1847. However, there’s still a chance a family or two had a small Christmas tree in their home, since the tradition gained real power in the New England area before spreading to the rest of the country.

Also, seeing as how many of the Mormon pioneers came from overseas, perhaps the tradition had reached a few of them as Germany’s custom spread first through Europe and eventually across the Atlantic to the USA.

There’s no way to know for sure if any of the pioneers had a Christmas tree for their first Christmas in the Salt Lake Valley, but if a few families did in fact have a Christmas tree, did they decorate it with ornaments?

OrnamentShop.com addresses this question by telling us how in the early 1800’s, common ornaments were dried fruit, nuts, and gingerbread cookies (or other hard cookies) baked into all kinds of shapes, including bells, angels, stars, fruits, and hearts. As time progressed, families in the US were known to decorate their trees with strings of popcorn, cranberries and other fruits.

One thing we know for sure is that music was definitely a part of Christmas, as evidenced by the Prophet Joseph Smith’s early morning caroling experience. But what carols did they sing? Did they sing any of the holiday favorites we enjoy listening to today?

MentalFloss.com wrote an article titled “The Origins of 10 Popular Christmas Carols” that helps us to know what songs may have been around for the pioneers to sing.

Seeing as how the English version wasn’t available until 1858, almost ten years after the first pioneers arrived in the Salt Lake Valley, if the pioneers did in fact sing this song on Christmas, it would have been in its native language: German.

The earliest incarnation of this carol was a poem penned in 1739 by Charles Wesley, brother of John Wesley, the founder of Methodism. However, the original opening line as it appeared in his collection Hymns and Sacred Poems was “Hark how all the welkin rings,” using a rarely invoked term for heaven. Anglican preacher and Wesley contemporary George Whitefield tweaked the opening line to the titular one we know today.

The article continues by explaining how the song was sung to many different tunes, including “New Britain,” otherwise known as the tune of “Amazing Grace.” It wasn’t until 100 years later, in 1839, English musician William H. Cummings placed the song with Mendelssohn’s cantata Fetgesang. This is the version we all know and love today, and while it would have been a fairly new version for the pioneers to be singing, they very well could have sung the song during their first Christmas—just probably to a different tune.

“Revisions to the lyrics were made in 1819 by Joachim August Zarnack, and in 1824 by Leipzig organist Ernst Anschütz,” as MentalFloss.com tells us, but as the Christmas tree tradition began to catch on in America, so did the song.

It may not have been popular enough for The Saints to sing, but perhaps they had heard it a few times either from German immigrants or other fellow Americans who had begun to adopt these Germanic traditions.

Were bedtime stories read to the children on Christmas Eve like we do today? Were there any stories to read or be passed around?

The book started selling in the US in 1844 and performed just as well as it did in England. Perhaps a few pioneers bought this book while it was in stores in New England before their long trek across the plains? It’s a thought.

In the same article on ThoughtCo.com, we learn how the poem played a key part in shaping many of our Christmas traditions today: “For instance, the St. Nicholas gift giving would have taken place on December 5, the eve of St. Nicholas Day. Moore moved the events he describes to Christmas Eve. He also came up with the concept of “St. Nick” having eight reindeer, each of them with a distinctive name.”

With the poem having been published so early in the 1800s, and it having gained such popularity that the author eventually came out to claim authorship over it, I like to think that if the pioneers didn’t have a copy of the poem with them on their trek, perhaps they had memorized it themselves and told it to their children on Christmas Eve night. I know my family continues to enjoy reading this poem on Christmas Eve night almost two hundred years later. 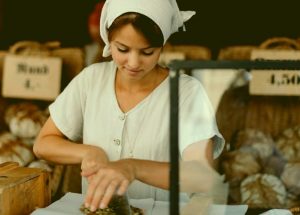 DeseretNews wrote an article detailing a story of what the first Christmas in Utah was like for the Saints. The date was Saturday, December 25th, 1847, and while it was Christmas day, the Christmas celebrations were put on hold as there was a lot of work yet to be done before the Sabbath.

Leaky roofs needed plugging, a few fields needed plowing, children needed tending, and livestock needed food and grooming. The article tells us that an unidentified writer who was just a girl wrote some of what she experienced that Christmas:

“I remember our first Christmas in the valley. We all worked as usual. The men gathered sagebrush and some even plowed, for though it had snowed, the ground was still soft and the plows were used nearly the entire day on Christmas. We celebrated the day on the Sabbath, when we all gathered around the flag pole in the center of the fort and there we held meeting.

“And what a meeting it was! We sang praise to God, we all joined in the opening prayer and the speaking that day has always been remembered. There were words of thanksgiving and cheer. Not an unkind word was uttered. The people were hopeful and buoyant because of their faith in the great work they were undertaking. After the meeting, there was handshaking all around. Some wept with joy, the children played in the enclosure.”

After the meeting, many returned home to eat their meager yet plentiful Christmas dinners consisting of boiled rabbit and bread in some cases.

The Saints’ first Christmas may have been busy and filled with work and even some hardship, but the Spirit was felt, and Christ was remembered. The little girl even wrote near the end of her day, “All had enough to eat…In the sense of perfect peace and good will, I never had a happier Christmas in all my life.”

Go read the article to get the full story, and let us know if you have any ideas or stories of how Christmas might have been for The Saints those early years in the Salt Lake Valley in the comments!