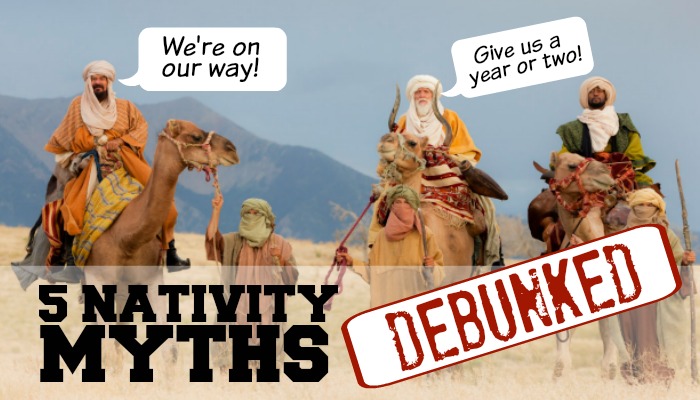 The popularity of collecting nativity sets has increased over the past few years (just look at the variety of these displays sold by Deseret Book during the holiday season). Many families search for nativities from different countries to add to their collection and LDS Stakes all over the world are sponsoring nativity or creche displays to share the true meaning of Christmas in their communities. But how much of the story that these quaint figurines tell is actually authentic? As Mormons, we affirm that the Savior of the world was born to a virgin mother in Bethlehem about 2,000 years ago…but how many of the details surrounding that birth are based on tradition and how many are based on truth? Let’s debunk a few of those Christmas myths to get a more accurate view of the Savior’s arrival to this mortal sphere.

1. Animals at the Nativity Scene

The cute little donkey, sheep, and cows usually included in a traditional nativity display are probably due to a lot of creative license on the part of the artists who first designed such holiday decor. Even a Catholic Pope has debunked this myth with a book he published in 2012, Jesus of Nazareth: The Infancy Narratives. Pope Benedict XVI acknowledged that animals were not a part of the nativity as there was no mention made of them in the Gospels. And, honestly, would Joseph really allow his wife to give birth in a place recently used by animals? If you have ever visited an animal pen, you realize the answer to this is an emphatic “no!” This does not mean that animals weren’t nearby, but the cattle might have been “lowing” in a pen next to the room where Mary gave birth, not hovering over her as she went through labor pains. We apologize in advance to those who really liked the new Christmas movie, The Star.

We all love to sing the popular Latter-day saint hymn, “Far, Far Away on Judea’s Plains” with its catchy chorus, “Glory to God!” The composer, early Scottish convert John Menzies Macfarlane, however, had never actually visited Judea and didn’t realize that instead of smooth, flat plains, the area is full of rocky hills. Shepherds near the town of Bethlehem would have seen the heavenly visitors as they were grazing their sheep on those hillsides, not the flat landscape we sometimes visualize as part of the nativity story.

3. The Wisemen Didn’t Meet the Shepherds

It doesn’t take a whole lot of research to debunk the myth that the typical nativity set portrays with wisemen and shepherds standing side by side. Many know that the Magi (wise priest-astronomers from the East) saw the signs in the heavens (most likely heavenly indications both preceding and at the time of His birth) and made their way to the land of Judea from there home in the Eastern countries. They knew that a king had been born and, as tradition dictated, they desired to find the new magistrate in order to offer him gifts and show reverence for his royal office.

A little digging on the internet provides plenty of varying ideas on the exact time that the Magi did visit Jesus. Some scholars use Josephus’ account of Jewish history to calculate this time based on the historical events during the time of Herod. The general consensus is that they finally found the sign resting over the residence of the child Jesus and his family 1 to 2 years after his birth. It was their warning, of course, that motivated Joseph and Mary to escape to Egypt to avoid Herod’s murder of all Jewish boys under the age of 2 and, possibly, their gift of gold that gave them the financial means to take the long journey.

Either way, if you are concerned about nativity accuracy in your décor, you can remove the wisemen from their place opposite the shepherds and place them across the room with a sign above saying, “We’ll get there in a couple of years! No false traditions being perpetuated here!”

Wood was in no doubt scarce in the area of Judea and, therefore, construction was typically done with stone. That being said, Judeans also used the plethora of limestone hills surrounding their towns to provide partial walls for buildings. In other words, some structures were literally created by hewing stone out to create manmade caves. In this article by Catholic archaeologist Emily Cavins, she observes that the “stable” would have basically been a stone cave.  She also makes an interesting observation about the possible symbolism inherent in this environment, “The manger as well would have been hewn of stone, and many such mangers have been excavated around the country. It is amazing to think just how earthy the [birth of Christ] truly was. The infant Son of God entered the world not only on the surface of the earth, but beneath it, in a way pointing us to how he will be laid in the earth again for three days before his Resurrection.”

5. The Actual Date of Christ’s Birth

Debates over the real date of Christmas range from April 6 to June 17 to September 11 and to the current month we celebrate—December. Reasons for variations in these dates are mostly historical, scriptural, and astronomical in nature.

For instance, the April 6 date, which many thought to be confirmed in section 20 of Doctrine and Covenants has recently been found most likely to be incorrect, as studies of the Joseph Smith Papers uncovered that particular verse was an addition by David Whitmer, not an official revelation by the Lord. BYU Professor Jeffrey Chadwick has written an entire scholarly paper on the subject, utilizing various scriptural accounts and dates to refute the April 6 date and place Christ’s birth at sometime in the month December of 5 BC. Both J. Reuben Clark and Bruce R. McConkie also supported the birth of Jesus as occurring in December. Author Gale Boyd in Days of Awe (available from Amazon.com here) places Christ’s birth in the spring at Passover.

Other non-LDS Christian scholars have analyzed both historical and astronomical events to come up with a date indicated by a “sign in the heavens.” Their theories are largely based on the assumption that a planetary conjunction and alignment of certain stars were signs of the Savior’s birth. Using modern-day technology, they have been able to figure out what was actually happening in the skies over 2,000 years ago. Ernest L. Martin, a Christian scholar and author made famous the theory about the star of Bethlehem actually being a conjunction (alignment) of the planets Jupiter (symbolic of Christ) and Venus, creating an extremely bright light in the heavens. This occurred directly over the area of Bethlehem on September 11 of 3 BC. Martin also uses Jewish holy days to further ascertain the exact date, recognizing that Rosh Hashanah of 3 BC was on that particular date.

The bottom line is: due to the abundance of theories, the date of Christ’s birth is still an aspect of the nativity that we might have to personally research and ponder. Arriving to our own conclusion following study and prayer may be the best way to solve the mystery of the Savior’s true birthday.

Accuracy about the nativity may not seem that important, but it is sometimes the details inherent in our cultural celebrations that can turn a faithful tradition into a false one. Seeking truth about the specifics of Christ’s birth isn’t a distraction, but a way to increase our faith and be taught by the Spirit. As we learn more about our Savior’s arrival into a tabernacle of flesh, we learn the importance of divine symbolism (as in the example of the stone manger) and heavenly signs (like those portrayed in the sky before and during His birth) that can further strengthen our testimony help us see history from God’s point of view, rather than man’s.