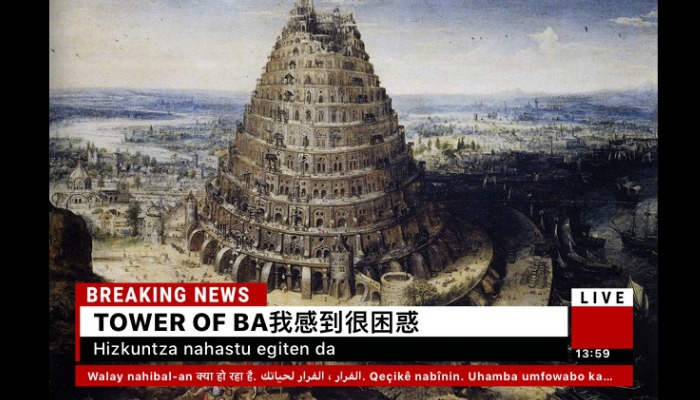 I come from a bit of a broadcast journalism background, so I oftentimes look at events from the perspective of a news reporter. That perspective, combined with a fascination with the scriptures, got me to thinking: If TV news were a thing in ancient times, what might some of their reports look like? The following 10 images, along with some scriptures to give context, are the result of that train of thought.

And he turned back, and looked on them, and cursed them in the name of the Lord. And there came forth two she bears out of the wood, and tare forty and two children of them. 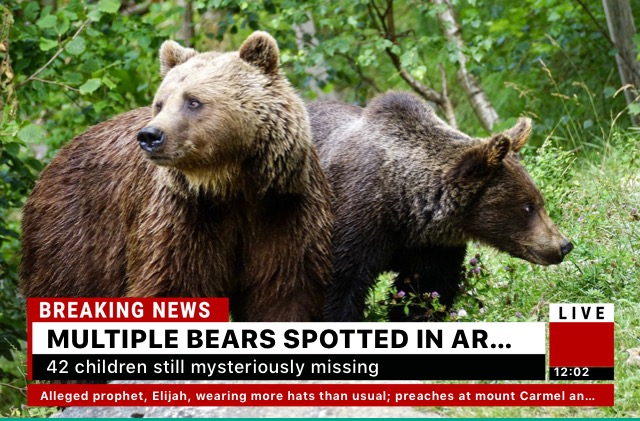 And they said, Go to, let us build us a city and a tower, whose top may reach unto heaven; and let us make us a name, lest we be scattered abroad upon the face of the whole earth.

… So the Lord scattered them abroad from thence upon the face of all the earth: and they left off to build the city. 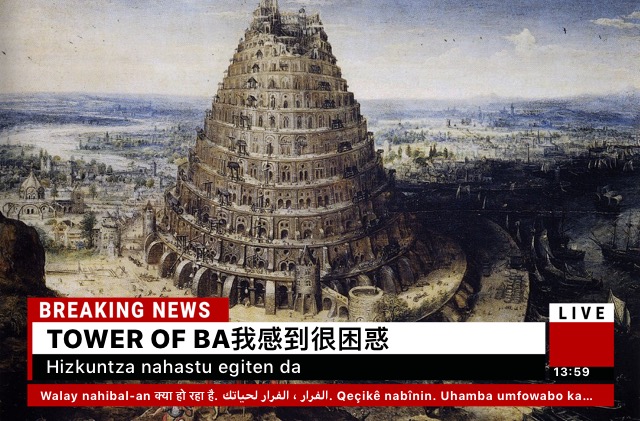 And Moses stretched forth his rod toward heaven: and the Lord sent thunder and hail, and the fire ran along upon the ground; and the Lord rained hail upon the land of Egypt.

So there was hail, and fire mingled with the hail, very grievous, such as there was none like it in all the land of Egypt since it became a nation. 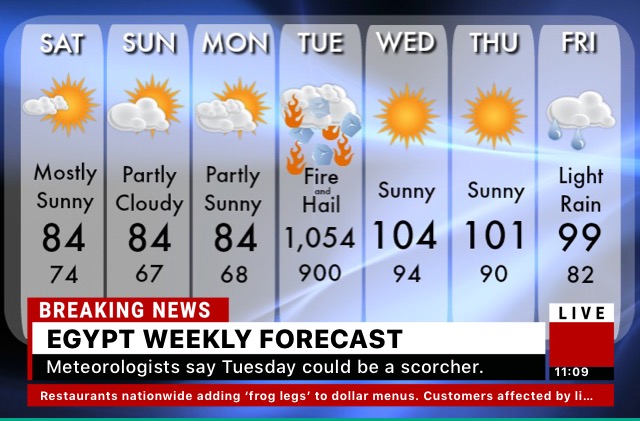 4. The birth of labor unions

And when they came that were hired about the eleventh hour, they received every man a penny.

But when the first came, they supposed that they should have received more; and they likewise received every man a penny.

And when they had received it, they murmured against the goodman of the house,

Saying, These last have wrought but one hour, and thou hast made them equal unto us, which have borne the burden and heat of the day.

But he answered one of them, and said, Friend, I do thee no wrong: didst not thou agree with me for a penny? 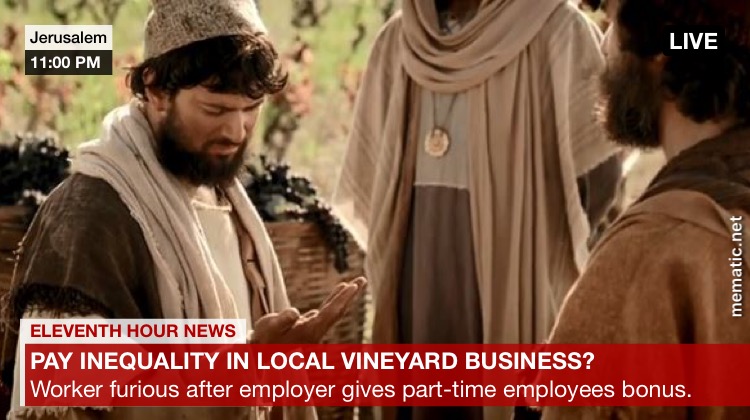 5. State of the Union 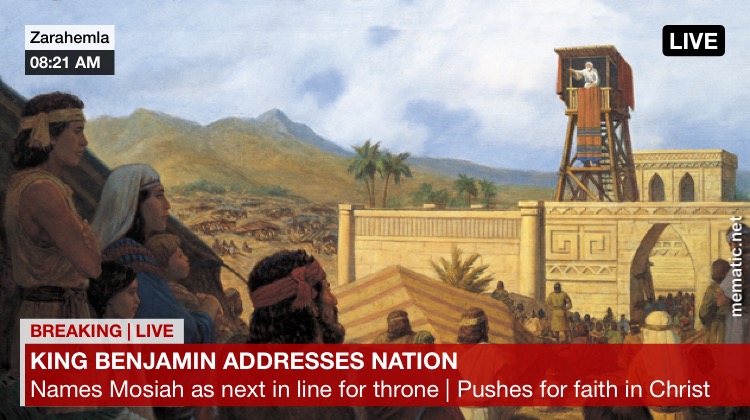 Yea, behold it is now even at your doors; yea, go ye in unto the judgment-seat, and search; and behold, your judge is murdered, and he lieth in his blood; and he hath been murdered by his brother, who seeketh to sit in the judgment-seat.

…Behold, now it came to pass that when Nephi had spoken these words, certain men who were among them ran to the judgment-seat; yea, even there were five who went, and they said among themselves, as they went:

Behold, now we will know of a surety whether this man be a prophet and God hath commanded him to prophesy such marvelous things unto us.

…And it came to pass that they inquired among the people, saying: Where are the five who were sent to inquire concerning the chief judge whether he was dead? And they answered and said: Concerning this five whom ye say ye have sent, we know not; but there are five who are the murderers, whom we have cast into prison. 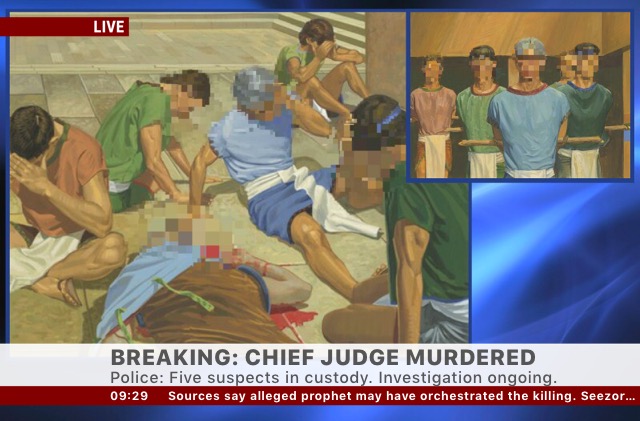 And they traveled throughout all the land of Zarahemla, and among all the people who were under the reign of king Mosiah, zealously striving to repair all the injuries which they had done to the church, confessing all their sins, and publishing all the things which they had seen, and explaining the prophecies and the scriptures to all who desired to hear them. 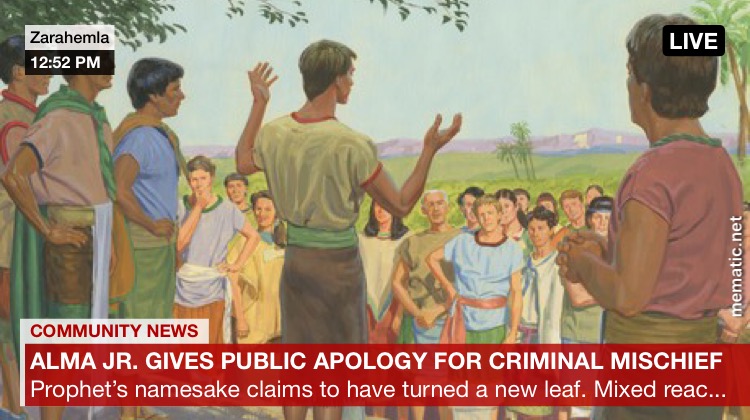 Therefore, if this is the case, I would that ye should go in and see my husband, for he has been laid upon his bed for the space of two days and two nights; and some say that he is not dead, but others say that he is dead and that he stinketh, and that he ought to be placed in the sepulchre; but as for myself, to me he doth not stink. 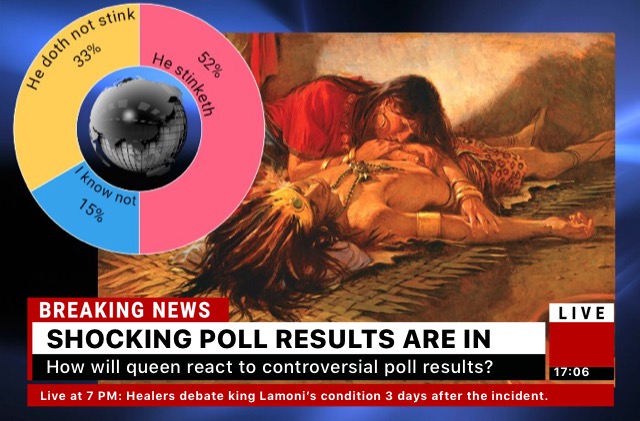 9. Illegal to film the jury

And he said unto him: Abinadi, we have found an accusation against thee, and thou art worthy of death.

For thou hast said that God himself should come down among the children of men; and now, for this cause thou shalt be put to death unless thou wilt recall all the words which thou hast spoken evil concerning me and my people.

…But the priests lifted up their voices against him, and began to accuse him, saying: He has reviled the king. Therefore the king was stirred up in anger against him, and he delivered him up that he might be slain. 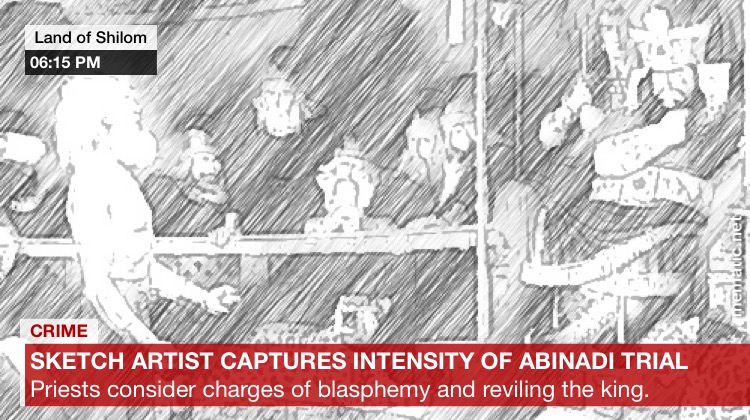 And it came to pass that there was thick darkness upon all the face of the land, insomuch that the inhabitants thereof who had not fallen could feel the vapor of darkness;

And there could be no light, because of the darkness, neither candles, neither torches; neither could there be fire kindled with their fine and exceedingly dry wood, so that there could not be any light at all;

And there was not any light seen, neither fire, nor glimmer, neither the sun, nor the moon, nor the stars, for so great were the mists of darkness which were upon the face of the land. 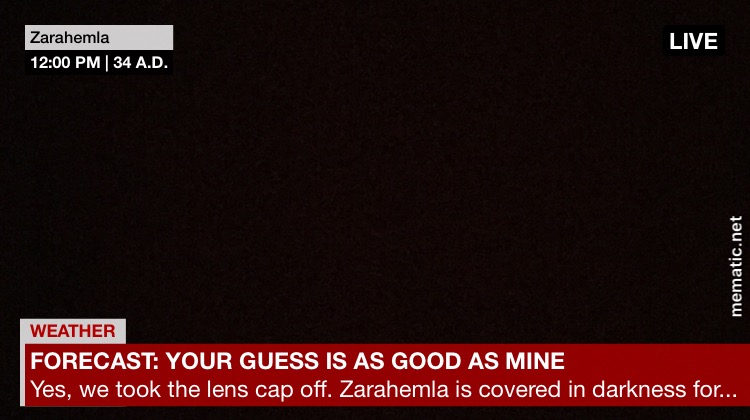 OK, so I may have taken a little artistic license with a few of these. Maybe some were a biiit dramatic, but the media is known to do that every once in a while, right? Needless to say, if TV news existed in ancient times, I probably would have watched it more.

Have any more good headline ideas about ancient events? Let us know in the comments!

Related: 13 Tweets from Laman and Lemuel