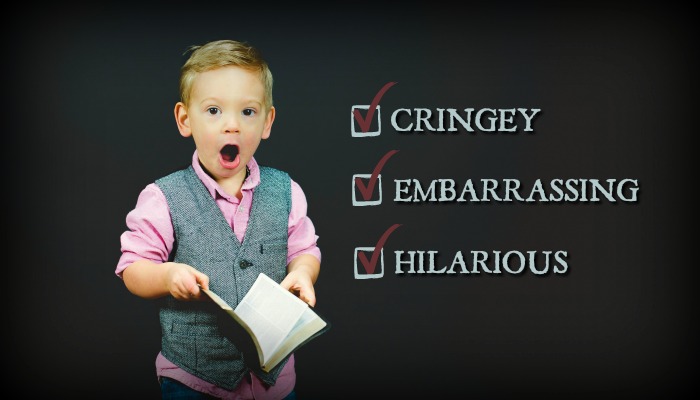 Sacrament meeting. It’s great, but you never really know what’s going to happen, especially during fast and testimony meeting when anyone can speak their mind from the pulpit. Here are 15 stories from when things went wrong in sacrament meeting:

1. Kids will be kids

I’ve got a couple:  1) A friend of mine had a really strong baby boy. He had a glass 8-ounce baby bottle full to the brim with milk. He grabbed it by the nipple and thonked the sister in front of him on the head with it. Knocked her out. An ambulance came and took her away. 2) We lived in Israel for years, and before the Jerusalem Center was built, we met in the basement of the Swedish embassy. We had a very simple potty in the nursery for our 2 year old, really just a straight-sided plastic bowl with a wide lip and a handle. She ran out of sacrament meeting and showed up a few minutes later with her panties down around her ankles and that bowl sloshing with pee and poop. She was so proud, she wanted to show everyone.

Via a comment made by Gale Boyd on this ldssmile.com story

2. Maybe this is why the high priest calling got the ax

An older man gave a 10 minute prayer that covered the following: Asking God to open our eyes to the deceptive media, protect Trump from assassin’s bullets, and to help President Monson expose the Illuminati. I wish I recorded it. Classic old school Utah high priest prayer.

As told to me by Richard Holzapfel, American Government 2006:

It was a BYU married student ward. A man gets up in testimony meeting and refers to a D&C scripture where we are told to confess our sins to the congregation.

‘I have committed adultery.’

(The congregation’s collective jaws drop. Then, of course, they turn to look at his wife.)

(They turn to look at her.)

Oh boy. The stake high councilor forgot to prepare, so he just read and discussed the doctrine behind hymns, including ‘if you could hie to kolob’, ‘o my father’, ‘Adam-ondi-ahman, etc, while the missionaries had first time investigators there.

One of the oldest members of the ward finished off testimony meeting by playing ‘amazing grace’ in Cajun French off of her phone held against the microphone and demanding that we sing along. The new branch president had no idea what to do.

Bishops mother decided to use her talk as the opportunity to announce that blood sacrifice will be reinstituted in the millennium.

6. A bit longer, but well worth the read

We were living in a college married ward (my husband and I with two young daughters, probably 4 and 6 at the time). My husband threw his back out the day before, so it was off to church I went with the girls, confident I could handle everything myself.

I was the ward organist at the time, so my plan was to just have the girls sit on the stand with me. They knew the rules- no pushing buttons, stay in your seat, be reverent, etc- so I didn’t expect any problems.

Let me backup to say that, while I was serving as ward organist, I consider myself only an intermediate piano player. And hymns are HARD to play, especially on an organ where you don’t have pedals to sustain your notes for the split second you need while you figure out your next chord.

Anyway, back to this particular Sunday- I was playing the prelude music (the same songs we’d be singing during sacrament meeting—why not use prelude to practice the songs one last time?) when my younger daughter indicated she needed to use the bathroom. We still had about 5 minutes before church started, and my older daughter had recently started making the trips to the restroom on her own, so I asked her to take the younger daughter to the restroom.

They left, and I happily focused my attention on the prelude music, undistracted. Then the prelude ended, opening announcements were made, the opening song and invocation were given. Then callings were released and others were sustained, and finally it was time for the sacrament hymn.

And my girls hadn’t come back yet.

I was starting to get very concerned- 15 minutes in the bathroom? What could be happening? Did they get lost? Were they in trouble? Where were my kids?!

But then- midway through the second verse- I hear them. They slam open the door to the chapel—the older daughter dragging her sister while the younger one screamed and cried as they approached the stand.

I tried to focus on the music, messing up every other chord, and as they finally approached, I harshly whispered at them to be reverant and just sit down.

And that’s when, at the start of the third verse, my eldest yelled ‘But Moooooom, she was taking forever!’

And the younger one replied, even louder: ‘I WASN’T DONE WIPING!’

I finished the song as best I could- I’m sure my face was purple at that point. Sorry I ruined the sacrament spirit, everyone.

7. Didn’t see this one coming

OK, this one isn’t hilarious. It’s terribly sad. Just goes to show that you never know what might happen in sacrament meeting!

One Sunday our chorister died in between hymns. No one noticed until she didn’t stand up for the next hymn. Her son was the bishop of the other ward in our building. Luckily, his ward started at 9 and ours at 11, so someone was able to run and get him with no issue. The rest of the congregation waited in the cultural hall until whatever medical professionals left with the body. Then we filed back in and they passed the sacrament. It was….weird.

When my brother was about 2, my mom dropped him off for nursery and came back a few min later to check on him but he wasn’t there and the teacher told my mom he never came. My mom figured he left while her back was turned and frantically started searching the church for him when she suddenly hears the speakers come on with the voice of my brother. ‘I hate church!!!!!!!!!! I hate all of you!!!!’ He had run up to the podium, all during another ward’s sacrament meeting ringing throughout the pure silence screaming words of hatred. During. Sacrament. 0-0. My mom was absolutely mortified and found him being dragged out of the chapel screaming and crying in that ward’s bishop’s arms. She made triple sure he stayed put in nursery from then on[.]

Via this ldssmile.com article (check it out for other great stories)

I was sitting in the choir seats after a musical presentation and during the second speaker. There seemed to be some ‘commotion’ in the right hand benches. Each bench of people would get a strange look on their face then quickly (and quietly) file out of the chapel. Other people were looking around at them, but the meeting went on. Within a few minutes the entire right hand side of the chapel was completely empty. It was really weird, but the High Council speaker finished and the meeting ended as normal.

We found out shortly that some woman in those benches had a pepper spray that sprung a leak. The cloud expanded through the column of benches and a couple dozen people ended up out in the halls, coughing and eyes watering. Several elderly people and parents with small children were particularly unhappy that day. The ward member with the broken pepper spray slunk off and went home early.

I have witnessed two profanity laden verbal confrontations erupt during the sacrament. One of which being between a one-legged gentleman in a wheelchair chasing his very elderly mother with her cane. All the while he was loudly and explicitly accusing her of smoking his last cigarette. Things get crazy in southern Louisiana. I couldn’t make it up.

I was in F&T meeting when a woman went up and started telling her life story and crying, then she just started talking gibberish. After about 30 seconds she said, ‘I don’t even know what language I’m speaking,’ and went right back to the gibberish.

The bishop just sat there. Philly wards are different. You just have to sit through some weird stuff sometimes.

On my mission, there were supposed to be three talks but two people didn’t show up. The one guy who showed up spoke for the entire time, but towards the end he started speaking really slow and taking pauses every few words. My companion and the other Elders thought that it was just stretching for time or fatigue. He ended up vomiting all over the pulpit.

Another time a mother was carrying out her screaming toddler. Just before she reaches the door, the toddler extends a hand toward the stand and shouts, ‘Bishop, HELP!’

While I was bishop, a woman bearing her testimony had her skirt fall down complete to the floor. It was an old building, and the seats on the stand were very close to the pulpit. My counselor’s face was just a few feet from the now panty covered bottom of this lady. The best part was she didn’t miss a beat. She saw what had happened, reached down and pulled up her skirt, and continued her testimony.

To this day people in the ward still come up to me and remind me of the incident. Thankfully the sister has moved.

These stories make me feel so much better about our ward.

A few years ago we had a woman bear her testimony who we all knew was a little crazy, but seemed rather harmless. She was rambling on for a long time and to be honest, I think a lot of us weren’t paying attention for a while. Suddenly she started talking about how she was searching for a cure for cancer – this caught most of our attention – and how she was experimenting with different compounds to see what the cure might be (she explained that God was directing her in this process) and that she had finally realized that the cure to cancer just might be axle grease and she was working on the various ways of ingesting and using axle grease to see what kind of results she could get and not to worry about her because this was all being done by God’s hand. One of my good friends turned around and mouthed to me ‘did she just say she’s ingesting axle grease!?’ To which I could only answer ‘yes’.

This was my husband’s first F&T meeting as Bishop of our ward and he looked absolutely terrified. I knew he was wondering what, if anything, he should do. When she got to the part where she started having a personal relationship with Jesus while he was floating over her kitchen table (while she was lying on the kitchen table) we all became extremely scared of where this was going next. My husband popped up whispered something in her ear and basically had to physically start pulling her from the microphone. She finally quit.

This wasn’t the last time my husband asked someone to sit down. It was the last time this particular lady was allowed to bear testimony though. Later, she left the church lobby while flipping the bird at my husband saying ‘See Ya, See Ya Wouln’dt [sic] Want to Be YA!’

And there you have it! If you’ve got a good sacrament meeting horror story, PLEEEASE consider sharing it in the comments section. These stories are gold.