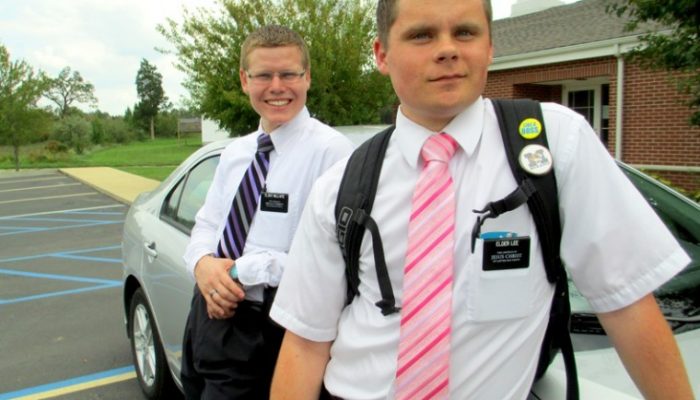 I know we hear them every week in Sunday School and Elder’s Quorum—especially if you have the singular good fortune of being a member of a Young Single Adult Ward—but the truth is, we Latter-day Saints love a good mission story, especially if there’s a delicious hint of that refreshingly self-deprecating humor we’re so famous for.

Here are three stories, both from my own mission and that I heard told firsthand directly from the source, that don’t necessarily have a New Testament parable ending but can serve to remind us all that one of the most important things a missionary can have is a sense of humor.

1)  The old “light up a guy’s cigarette and then teach him the Word of Wisdom” trick.

Elder Shane M. Bowen, at the time serving as the first counselor in the Area Presidency my mission (Argentina Bahía Blanca) belonged to, related a tale in a special zone conference about two elders in South America who had just experienced a bitter disappointment with an investigator. They had been preparing him for baptism, but he was struggling with the Word of Wisdom—with smoking in particular, which is a widespread addiction below the equator. Finally, the missionaries agreed with the man that they would confiscate his lighter, making the temptation less readily satisfied. They left him with a word of prayer, as we always did, and set out to make the long walk back home.

As they walked, they passed through the downtown area, making what we called “street contacts.” As they went about trying to engage the local pedestrian traffic, they passed a man on a street corner holding an unlit cigarette. The man grabbed them, clearly not understanding who they were, and asked (in Spanish, of course, but essentially), “Sorry, fellas—you wouldn’t happen to have a light, would you?”

To his less-travelled junior companion’s astonishment, the senior companion palmed the confiscated lighter from his coat pocket, reached up and lit the man’s smoke. The man uttered a heartfelt, “Thanks,” and the Elder offered his hand and said, “Nice to meet you. I’m Elder [Smith].” They engaged in a bit of small talk, and then proceeded to teach him about the Restoration of the Gospel right there on that same street corner.

A few weeks later, they taught him about the Word of Wisdom, after which he gave up smoking. The man and his entire family were later baptized.

There were a lot of dogs in my mission, and certainly no government agency even closely resembling Animal Control. For the most part, even when they were “owned” by people—which pretty much just meant they gave them food once and the dog subsequently decided that this magical food-bearing human was a cool dude, and stuck around—they were rarely chained up.

When they were, it was because they were “trained.” Not “roll over, good boy” trained, but “if anything unfamiliar comes within this radius of the front door, transform into a small and exceedingly hostile ninja bear” trained.

I learned quickly, as we all did, to watch out for them, but as my companion and I were out tracting one day, I came around a blind corner which opened into a front yard. The only warning I got were a few subtle clinks and a sweeping sound as a 200-pound (or whatever) Rottweiler charged me in stealthy ninja bear silence. I sprang back, it snarled and leapt, and I thought, “Hey, dummy. Punch it or something.”

When it collided with my chest I expected to see a bunch of Hollywood horror film stuff happen, but other than feeling like I just got the front door to my chest castle rammed by a bunch of angry villagers and awkwardly scrambling back onto the hood of somebody’s Fiat, I was remarkably unscathed. The Rotty ran out of chain about two feet from me, becoming rapidly disinterested as it knelt down to nibble on something small and black.

I grabbed my chest, fearing in one crazed-fanboy instant that the animal had Indiana Jones and the Temple of Doomed my heart (or something), but quickly realized instead that my white shirt pocket was vacant—the black nametag was gone.

I admired the slobbery handiwork the dog was doing on the placard that once upon a time read “Elder McDiarmid,” chuckled a bit purely out of untapped adrenaline, and said to my companion, “Now how will they tell us apart?”

I can sincerely promise you that the majority of the time, missionaries are deeply immersed  in the work they’re doing, and go about it with a solemnity far beyond their years. But sometimes, missionaries are just 19-year-old boys.

And sometimes they’re a bit naïve.

Like the time Elder Rees and I walked out of the grocery store with a few bags of milk and were immediately accosted by a basket-toting Red Cross health services representative who both obviously misunderstood the purpose of Mormon missionaries and didn’t do a thorough enough job of explaining the contents of her heathen bushel before shoving them all-to-eagerly into our hands.

And hey, we were missionaries. When strangers voluntarily approached us, we were generally in such a state of shock that we accepted whatever handouts they offered without question.

When I felt the wrapper and looked down in horror at the foreign package, I honestly don’t remember thinking anything. I sincerely hope I didn’t say anything silly, like “thank you.” I don’t remember much about the walk back to our apartment, aside from the fact that a constant theme within my inner thinking parts was “Don’t make eye contact. Don’t make eye contact.”

Here’s the part where our naïveté set in—when we walked in the door, Elder Rees and I set the little silvery wrappers on our kitchen table and spent a good 15 minutes deliberating over what we were going to do with our little pieces of unwanted humanitarian aid. At length, it was decided that the most logically sound course of action would be to test the structural integrity of their rubbery (pun unabashedly intended) contents by making makeshift water balloons out of them and then hurling them from the top of something very tall.

Our first attempt ended with our kitchen soaked in water, because halfway out the door after filling it and tying it off we realized how hilarious the thing looked just jiggling around on the table (think hyperactive lava lamp, without the lamp) and took to slapping the slippery blob back and forth at each other while trying to decide whose belly it most resembled in between fits of asthmatic giggling. It exploded.

We were more delicate with our second experimental test. The launch was a success. I’m not sure I’ll ever know what it is that makes watching an amorphous water-bubble tumble headlong and spatter into the concrete so comically satisfying to a 20-year-old male.

When the festivities concluded, we went back inside and spent the rest of our lunch hour planning a lesson on the Law of Chastity.