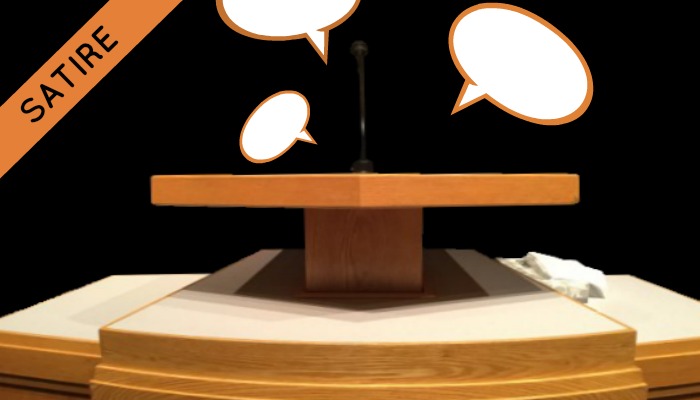 NEPHI, Utah—”Fetch.” That’s how 13-year-old Jacob Clark responded when Bishop Gene Harris asked him to give a five-to-seven-minute-long talk in Sacrament Meeting on June 18th—Father’s Day.

Clark’s dread only accelerated when he learned of his assigned topic: the supernal role of fathers.

“There exists an unspoken obligation assigned to a topic like that,” said the abnormally eloquent deacon. “Everyone will expect me to close my talk by saying how much I love my dad. That’s something that I, and any teenage boy for that matter, am not prepared to do publicly.”

One of our news affiliates spoke with Clark’s father, Brother Harvey Clark, about his expectations for Jacob’s talk.

“Jacob is giving a talk on Sunday about fathers?” Brother Clark said. “That’s crazy. This is so unexpected. What are the chances, right? Jacob and I have sort of been butting heads lately, so this will be really good for him. Wow, it’s almost like somebody gave the bishop forty pounds of frozen beef under the table as a bribe to make this happen. I think this will really bring us together.”

This is an ongoing story. We will provide updates as they become available to us.

Sources report that while Jacob Clark did praise fathers and father figures generally, he failed to address specific positive qualities found in his own father.

Members do say the congregation held it’s breath in unison when Clark paused towards the conclusion of his talk. “It looked like he was trying to say something,” one member said. “He was looking straight at his father, but all that came out was, ‘and… my father is… he’s… Harvey Clark. Amen.'”

This article is purely satirical and simply written for your amusement. Happy Father’s Day to all you dads out there. We love you. And we’ll admit it publicly.