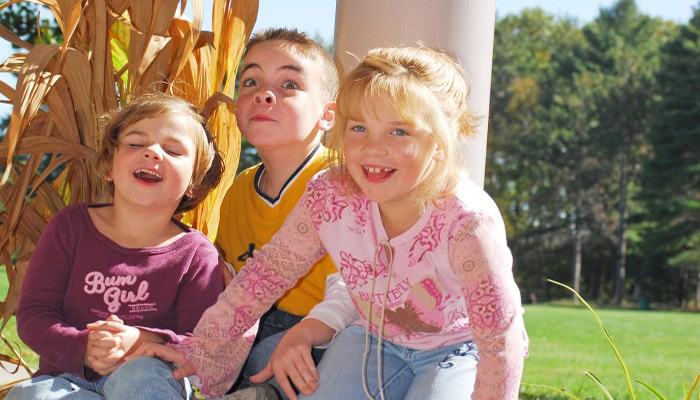 If you’ve come to church looking for a good laugh, you should probably consider heading over to your primary since there’s no shortage of laughs to be had.
We asked our readers and writers for their best stories from primary or about primary kids, and you delivered!

Mark Peterson tells us this story about an oversharing five year old.

A teacher was giving a lesson on the plan of salvation. She said to her five year olds that if they were good they would go to heaven. One of the girls piped up in the corner, “and if you’re bad you go to hell right?”
The teacher was a little surprised but said that yes, that was basically what would happen. The little girl nodded, and said, “that makes sense, because when my dad does something bad, my mom tells him to go to hell.”

Christopher Cunningham tells us this story about a very technical voice from the back of the room.

The stake primary had come into junior primary for ward conference. They were giving a lesson on reaching our full potential. They started by showing the kids different roles they could have as grown ups. They called a child up to put on a costume, and then asked the kids to shout out the job. They put on a construction worker’s hard hat, a firefighter’s yellow jacket. And the kids dutifully identified the jobs with each one.
Near the end they gave a little girl a rolling pin and apron. “What is she?” they asked. The kids shouted back, “A baker,” but that wasn’t it. They asked again, “A cook,” the kids shouted back. They tried again, by this point most of the kids were nervous to venture a guess, but one precocious eight-year-old in the back shouted “a pastry chef.” Alas, they were looking for the answer, “Mother.”

Katie Walston tells us the story of a mother who had more important things on her mind.

I was standing in the hall with about 100 other people when I see this mom walking down the hall with a toddler in a dress and a diaper in tow. The diaper starts slipping down, and mom’s not noticing. Then the diaper is around the kids ankle, when she just lifts her leg and shakes it off, leaving the diaper smack dab in the middle of the hallway. Not a single other person notices what just happened.

Palerider from our LDS.net forums shares a story about one six year old with a secret identity.

We had a visitor in our ward primary, and she was talking to all the kids in primary and she asked them to go around the room and introduce themselves. One little boy about 6 years old, when it was his turn, said, “My name is Proffessor Rasnick McTinkerpot”

Rebekah Eaton tells us about a child who shares very accurate examples.

We were discussing saying thank you for gifts even if you don’t like them. One child felt the need to give an example when he raised his hand and said, “Like fruit cake.”

Susan Cunningham tells us the story about one particularly forgetful child.

The week after I was called into Primary, I was sitting in sharing time. In the front row of the senior primary children there was one boy who was super eager to help. Every time someone was called up to volunteer he would respond, “I haven’t had a turn yet.”

After about a month of serving in primary the boy’s turn finally arrived, and he was called on to participate during a singing time activity. During the lesson five minutes later, the primary counselor asked for a volunteer. “I haven’t had a…” and then sudden silence.

Allison Foulk tells us the story of a teacher who got a little carried away.

A few of the Primary teachers were acting out the story of Abinidi. The teacher playing Abinidi was trying to kill a bit of time at the end of the story and improvised the line, “God will save me from you, King Noah!”

All the adults in the room froze, wondering if there had been a change to the Book of Mormon we were unaware of. The primary teacher quickly realized his error, and then had to launch into an explanation about how he would be saved in heaven. True doctrine . . . but maybe a bit confusing for the Primary kids!

Vort from our LDS.net forums shared a story about one little boy with an uncanny knowledge about his anatomy.

I was in a Primary meeting where a bishopric counselor was talking to the children about using good language. At one point, he asked the children, “What kinds of words shouldn’t we say?” The children looked around at each other silently.

Becky Heckenlively shared a story about one child who was concerned about every single creature.

I was teaching a junior primary class the story about Noah’s ark, and I mistakenly said, “Noah brought two of every creature onto the ark to save them from the flood.”

One little girl looked very confused, raised her hand, and asked, “Even the sharks?”

To bring us home, Hydi Hoeger shares one funny primary moment after the next that we’ve all been able to witness at one point or another.

For me it was the little things that happen all the time. Kids breathing into the microphone while parents desperately try to get them to share their talks. The kid who likes to share a little too much information about his family life. The little ballerina who can’t stay in her seat. The Sunbeams who know 2 or 3 words from a song but give those 2 or 3 words lots of energy. Huge manly men having tea parties in nursery. Watching other people play dirty diaper roulette in nursery.