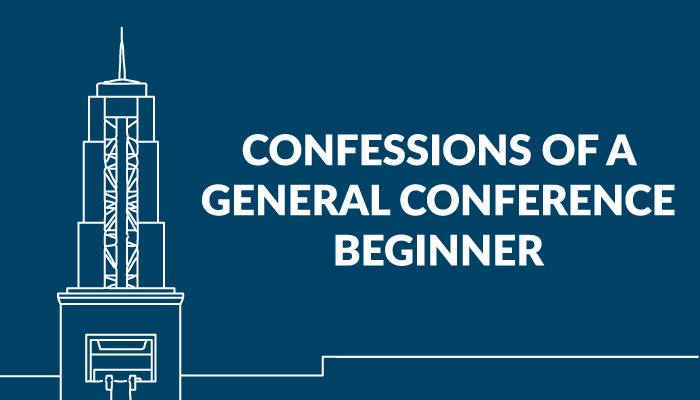 The first time I watched Mormon General Conference was in October 2014. I was still a nonmember at the time and was curious about conference. I wanted to know what it would be like to watch General Conference. The only talk I watched was when Elder Bednar spoke to individuals of different faiths.

I was intrigued by Elder Bednar’s talk, Come and See. I never thought that apostles spoke directly to others of different faiths at conference. I assumed their messages were always directed to members of the LDS Church.

Since I became a member in January 2015, I have only watched conference twice, April 2016 and October 2016. I missed the other two General Conferences due to other commitments. I had the opportunity to attend General Conference session for the first time in April 2016.

Here are four confessions I must make as a General Conference beginner:

I Have Yet to Watched both Days

I Talk Constantly or Fall Asleep

I can never stop talking, so it’s difficult for me to stay quiet during General Conference. I remember when I went to conference for the afternoon session in April 2016, I kept poking my husband and tried talking to him. I kept complaining to him that I was hungry. I’ve noticed that if I try to stay quiet during the sessions, I eventually fall asleep. The lights were perfectly dim and the chairs are so comfortable in the Conference Center that I easily fell asleep when I went to conference.

However, I didn’t fall asleep while watching conference on Sunday this past weekend. I saw my friend write down specific quotes or messages that stood out to her in April 2016 General Conference. So I decided to make that my goal for this conference. Although I failed to write the quotes and messages that caught my attention, I was able to stay awake for both sessions. I believe it’s a sign of improvement. If I have little tasks or goals related to conference, I’ll have a better chance of watching all of conference in April 2017.

I Do Sing Hymns

Although I sleep the majority of the time, I somehow wake up before the hymns start. When I went to the afternoon session with my husband and our friends, I remember my friend was worried that I wouldn’t wake up for the hymn. I didn’t have a strong connection when I sang the hymn, I just felt I had to sing because I was at conference.

This past weekend, I was more fully invested in singing the hymns than I’ve ever been. “I am a child of God” has been one of my favorite hymns ever since becoming a member. When I heard that we’re going to sing that hymn, my feelings changed. My heart lightened and I had more interest in listening to conference. I was no longer feeling bored. Tears of joy started running down my face as we sang, “I am a Child of God.”

I’ve been feeling that it’s pointless to set a positive example to those around me. I continue to be teased for my change of religious belief. I felt so discouraged that I just wanted to stop everything. I was confused as to why I should be an example when all I received was insults and people laughing at me. “I am a Child of God” reminded me that we’re all Heavenly Father’s children and we’re here for a reason. I’m going to continue striving to be an example because I love making Heavenly Father proud and that’s all that matters.

I am a child of God,
And so my needs are great;
Help me to understand his words
Before it grows too late.
Lead me, guide me, walk beside me,
Help me find the way.
Teach me all that I must do
To live with him someday.
I am a Child of God

Since Elder Bednar was the first apostle I heard speak at General Conference, I focus a lot better when he is speaking. I actually listen to his messages, not just hear. Another apostle that I listen to is Elder Holland. When I first came to BYU, the tennis team and I ran into him at the airport. I was so confused as to why my LDS teammates were so excited and nervous to see him. I just thought, “who is he?” Ever since that day, Elder Holland’s name has stayed in my brain. In April 2016 General Conference when I went to the afternoon session, I woke up and fully listened to Elder Holland speak.

In order for me to fully listen to all of our church leaders, I need to learn more about them. My husband took a Living Prophets class at BYU and was able to learn about their life, family, and occupations. I plan on taking the class next semester to learn more about their backgrounds. Taking this class will help me create a connection which will allow me to gain more interest in listening to them at the next General Conference.

I converted to the Church as a young adult. Being able to watch General Conference as a child is a blessing. As a child, you receive the opportunity to watch conference with your parents who have experience with the Church. Parents can teach their children why it’s important to watch conference. Children become familiar with and develop affection for the prophet and apostles growing up.