Life Why So Many Couples Now Meet on Their Missions

This article was originally published in Mission Geek by Lindsey Williams. Below is an excerpt.

Thirty days after returning home from her mission in Berlin, Germany, Katelyn Duncan was engaged.

In LDS culture, being engaged that quickly is not uncommon. But what makes Katelyn’s story unusual is that she is engaged to her former district leader whom she met on her mission in Berlin.

It’s been two years since the historic announcement lowering the age requirement for LDS young men and women to serve missions. While that announcement has helped the Church hasten the work, some unplanned outcomes may also be beginning to emerge as the first wave of “age-change” missionaries begin arriving home and prepare for marriage.

The math is pretty simple. Not only are the Elders and Sisters now closer in age, but also there are also more sisters than ever before. According to an article on the Church’s newsroom website, in the first year after the announcement lowering the ages for men and women to 18 and 19, respectively, the ratio of Elders to Sisters jumped from 6:1 to 3:1.

To read the rest of the article, go to Mission Geek. 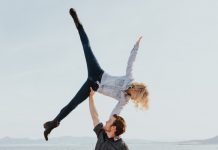