Life Mormon Culture Why Do We Celebrate Having Less Church? 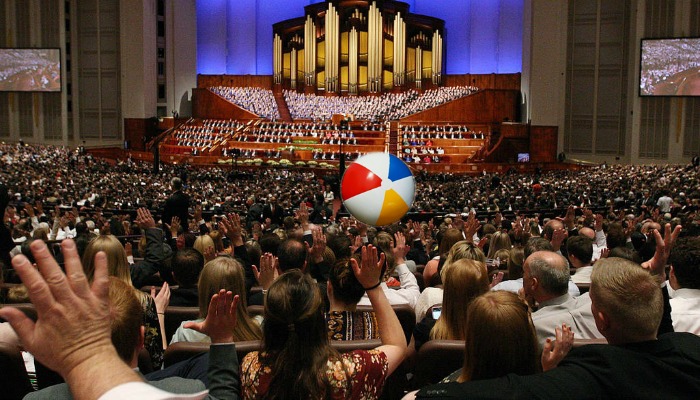 Less than a year into this thing, and no president of the Church has enjoyed more “jazz hands” moments in General Conference than Russell M. Nelson.

The “no more home teaching”  announcement was met with such loud acclaim that most of us missed the actual message, which was:  “More home teaching, but called something else.”

A temple in Russia?  The gasp in the Conference Center was enough to move my hair on my couch 1200 miles away, even though the important elements of “where” and “when” were admittedly absent.

Two hour church?  So help me, I’m pretty sure that I saw a beach ball start bouncing around the congregation.  Whoever brought that thing wasn’t about to get caught empty-handed two conferences in a row.

For next April, I’m adding to my Conference bingo card spaces for “colored shirts are okay,” “girls pass the sacrament,” and “blood sacrifice.”  The turtledoves better start watching their backs.

A more serious question arises with respect to a couple of these changes, which is, “Why do we get so excited about the prospect of less churchiness in our lives?”

It reminds me of the few times in our local ward when the air conditioner was completely inoperable (as opposed to the 50 times a year it just doesn’t work right).  Within minutes, coats started coming off, bald heads were beading up, the programs were folded into makeshift fans,  and 400 eyes turned to the bishop with the same question:  Is he going to cancel the rest of the meetings?

The tension of expectation settled down over the congregation until we were paying no attention to the suffering, sweating speakers.  When the big reveal came, and we were all sent home to our personal climate-controlled Babylons, there wasn’t a long face in the crowd.  Nothing but smiles and high fives and the dust kicked up by a whole ward running for the parking lot.

Think about what a special thrill it is to find out that a post-Sacrament meeting has been called off.  The out-of-body experience when a class ends 10 minutes early.  The nirvana of discovering that your home teaching families—or ministering families to whom you are a ministering brother and sister but definitely not a “minister”—are on vacation and don’t need to be visited.

Why do we so enjoy the prospect of doing less, when a testimony of the gospel should motivate us do more?  Why do we get outraged when services aren’t cut short for Christmas?  (My mother once pointed out that the difference between “Mormons” and “Christians” is that Christians only go to church on Christmas and Easter, and those are the only days that Mormons don’t).

Yeah, I used the M-word, but when she made the comment we were still Mormons.  Which highlights my biggest concern about these new naming rules:  The jokes just don’t fall off the tongue as well.

Understand:  I’m no different than anyone else.  I was immediately making calculations as to how this would affect my Sunday trifecta:  Napping, football, and napping.  But I’m at least feeling ashamed about it.  This notion that we just have too many demands on our time from what should be one of the chief priorities of our lives suggests a casualness about the gospel that would have left early members of the Church dumfounded.

If Church is the last place we want to be on Sunday, that doesn’t bode well for the rest of our weeks.

Now I need to go deflate a beach ball.