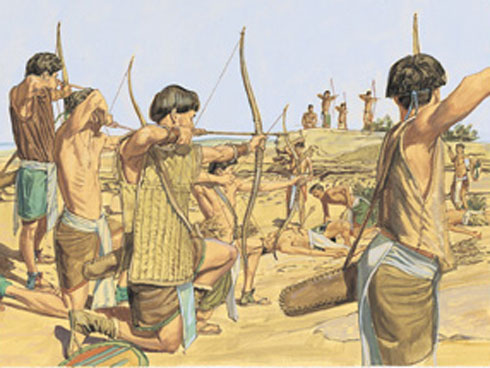 Lehi, the military commander from the war chapters in the Book of Alma (in the Book of Mormon), may be a relatively small character, but from this one unassuming man, I learned much about consistency, faith, and humility. It may seem strange to say, but in many ways I hope to be like Lehi.

In 81 B.C., peace had come upon the Nephites for several years. Without warning, a small army of Lamanites crossed the Nephite border. The Lamanites began to kill the citizens of the border town Ammonihah. The Nephites began to raise an army, but when the Lamanites realized the strength this army would soon have, they razed the city of Ammonihah and took prisoners with them, racing back to their own land.

Zoram, the commander of the Nephite army, wanted to rescue those who were taken prisoner. He gathered an army and took his two sons, Lehi and Aha, to intercept the Lamanites near the Sidon river. Lehi’s role in the battle was small, but they were able to save all the prisoners. Lehi’s name doesn’t appear for nearly another thirty chapters.

But Lehi’s father was busy. He moved to the land of Antionum, and started a group that called themselves the Zoramites. Zoram apostatized from the church, and  began to teach his followers that they should worship idols. He led them in building the Rameumpton, a large tower where his followers would pray aloud about their superiority to the other Nephites.

Alma, the prophet, took a group of the best missionaries of his generation to try and rescue the Zoramites. But Zoram’s teachings had become too powerful, and the Zoramites rejected the prophet. Lehi’s father had become one of the most hardened apostates of the Book of Mormon.

After years of tension with their fellow Nephites, the Zoramites  abandoned their Nephite heritage and joined the Lamanites. Their defection began what is often called the war chapters of the Book of Mormon. Emboldened by their new strength, the Lamanites attacked the Nephite territories.

With Zoram gone, a man named Moroni had been appointed as the new commander of the Nephite military. And it was his responsibility to fight off the incoming Lamanite attack. He immediately dispensed his captain, Lehi, to fight the Zoramites. I can only imagine the pain Lehi must have felt as he fought his father’s people. The Lamanites and Zoramites fought like dragons. And many Nephites lost their lives. But Lehi’s men outflanked the Lamanites, and dealt the final blow in the battle. Lehi’s victory was so devastating over the Lamanites that they came to fear him.

Lehi became one of Moroni’s two most trusted captains. His other, Teancum, was a passionate man. And his passion led to great victory, like assassinating the Lamanite king, but ended in tragedy when he lost his own life in an ill-conceived attack. Lehi was much more steady. His name is never associated with any great miracles; he had soldiers die in every battle he fought. Yet over and over throughout the war chapters, at every major military victory, there is Lehi.

Lehi is given control over some of the most important strategic resources, including the city of Mulek, and provisions for the entire army. It is even written that Lehi was a man “like unto Moroni” an impressive accolade considering that if all men were like unto Moroni “the very powers of hell would have been shaken forever.”

Lehi’s story impresses me, because he is always and forever in the shadows. He never quarrels with Moroni, he never acts against orders, and rewards seem to never come his way. Lehi seems to be the ideal soldier in the army of God, willing to follow to the ends of the Earth.

Then the war ends. Teancum dies. Helaman becomes the new prophet. Pahoran and Moroni retire, but nothing is said of Lehi. It would be easy to assume that as a minor character he simply disappears into the abyss of history. Moroni’s son, Moronihah, though he had never before been spoken of, becomes the new commander of the Nephite armies.

And then comes this single, and oh so important passage. In the book of Helaman, the Lamanites once again come against the Nephites. It’s a small skirmish, and Moronihah sends Lehi to take care of the problem, which he quickly and efficiently does. This is in the year 50 B.C., 31 years after Lehi’s first battle, he was still taking orders and efficiently doing the work he was assigned.