Service is an important part of the lives of Latter-day Saints, but how often do we forget to do the daily acts of service that can turn someone’s day around? That’s what Sheila Sjolseth, a member of The Church of Jesus Christ of Latter-day Saints, has set out to accomplish with Pennies of Time, a nonprofit that teaches families how to create habits of doing service daily.

In fall 2011, Sjolseth felt prompted to start teaching her two boys, ages 2 and 4, to serve, but wasn’t sure where to start. The following year she watched her dear friend lose her 21-month-old daughter Penny in a tragic accident. As she watched family, friends, and complete strangers embrace Penny’s family, she turned to prayer to figure out what she could do to help.

“I had never met Penny personally but I was just feeling for her parents and I was sad, and Heavenly Father reminded me to think of Penny’s name. And it just hit me, I was like, this whole thing of doing service with my kids, I need to do it in smaller increments, like a penny is a small amount of money. And so at that point, I was like, OK, this is how I need to think about it. I need to think of it as a penny of time.”

Sheila began a blog where she kept track of the activities she was doing with her boys each day and shared the ups and downs of teaching her children how to serve.

“Pretty soon we were spending every day doing a service project or an act of kindness. We started with things like bringing in our neighbor’s trashcans or putting a note for the mail carrier in the mail box.”

Soon they added bigger projects to their routine, including a road trip to Moore, Oklahoma, where tornadoes had devastated the area. As Sheila and her husband Erik helped clean up the carnage, the boys helped pick through the rubble to find special little pieces of memorabilia, which they would then run over to the survivors.

What I learned right then, because my kids lasted longer than I did, was this little bitty act of kindness everyday really built up their work muscles, their empathy muscles, their problem solving muscles, and I was like, oh my goodness, I had no idea!

As they continued doing large and small service projects as a family, Sheila and her husband Erik noticed a change in their boys’ attitudes, as well as their children’s ability to receive promptings from the Spirit about what they could do to serve others.

“It’s incredible the things that kids can do when you give them the opportunity. It doesn’t take a huge gigantic effort, it’s just a little effort every day. And if one day doesn’t go well, then you just try the next day.”

For spring break this year, the Sjolseth family went on a ‘kindness quest’ to New Orleans. Along the way, they did acts of service for strangers they met, including a family with eight children that was getting ready to move.

“We passed a house with a U-Haul in front and the kids were like, we have to stop! So eventually we went back, they helped her move, and we find out she’s a single mom who has breast cancer, is going through treatment, has been all over the U.S. trying to find a cure, has eight kids, and it was like, oh my gosh, we have to help her!”

So the family offered to help the mother and ended up not only helping pack up the moving truck, but also painting a bedroom.

While the family doesn’t always take road trips to help strangers along the way, even the intentional small daily acts of service can take effort. “With the Church and the Gospel, we’re taught to serve, and they’re always encouraging us to be out in the community, but sometimes it’s hard to take those steps, and with being busy, sometimes it’s hard to make a daily emphasis, particularly when there’s so much to the Gospel and what we’re trying to teach.”

The once simple blog in honor of Penny recently gained nonprofit status and continues to gain followers.

This is a lifetime thing, this is forever. As I work more on it, and connect with more people, there are others who are realizing it, but don’t know how to do it.

Sheila hopes that with the nonprofit title, she will be able to work with other nonprofits to create opportunities for families to help in their communities. 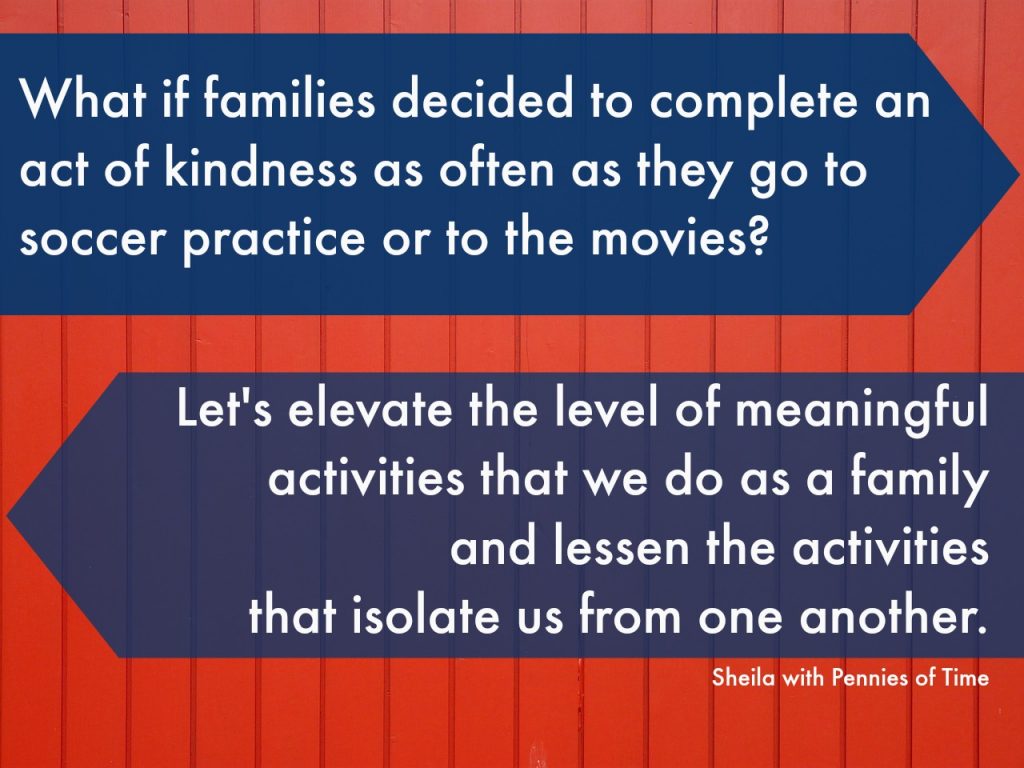 “The long term, I would hope that Pennies of Time provides an example to anyone who has even had a glimmer of thinking that they need to be serving with their kids, that it’s possible. If they want a happier family, or want to fight entitlement or want more empathetic kids, that it is possible. They don’t have to spend a lot of money, they don’t have to go through huge efforts. It’s just that little bit everyday, or a little bit on a frequent and consistent basis can really help them. It’s the small moments that end up making a big difference in the long run.”