Life Mormon Culture The Power of Belief and Why I Begin My Testimony with “I... 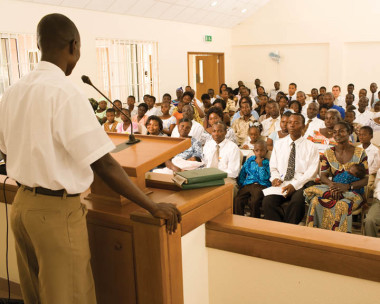 Once a month I have the opportunity to teach a class made up of the teenage boys from my congregation. Last month the topic of the lesson was the rather general “Belief in God.” Two new missionaries, fairly young themselves eighteen and nineteen, had recently arrived in our area and asked to get to know the boys in this class.

I seized the opportunity to dump part of my lesson and said a great way to get to know the boys would be to teach ten minutes of the lesson. I started the lesson by asking the boys to consider the question: Why do you choose to believe in God? This is no doubt a heady question for a group that includes several twelve year olds, but I hoped for the best. I asked the boys to consider the question over while the missionaries taught.

The missionaries took their time by answering my question from their own experiences. At least they thought they were answering my question. Rather than talking about why they believed in God, the missionaries both doubled down saying they knew God existed. Each missionary tried to explain a spiritual experience so powerful that they no longer had belief because it had been replaced by knowledge.

The display of spiritual bravado impressed and moved the boys in the room. But it also left them searching. How could they one day become powerful missionaries if the reason they believed in God was, “Because my parents believe in God, and they’ve never led me wrong” or “When I pray it just seems like someone is listening” or “I’m not sure if there’s a God, but I hope there is.”

Members of The Church of Jesus Christ of Latter-day Saints, or Mormons, have a cultural affection for the phrase “I know.” It appears in our hymns, is spoken by our apostles, and as a result is uttered in monthly testimony meetings across the world. Many young men and women preparing to serve as missionaries feel as though their testimony will only be complete when they can powerfully proclaim that they know.

While I do not mean to dismiss the unique spiritual experiences we all have, knowledge is not necessary for spiritual progress, and spiritual power does not come from knowledge but instead comes from simple, and often undervalued, belief.

Throughout the Bible, knowledge is always spoken of highly, but always as an aspiration. For an example Proverbs reads, “The heart of him that hath understanding seeketh knowledge” (Proverbs 15:14). If knowledge is something to be continually strived for, without necessarily attaining, what should be motivating this search? Belief.

In one of the great Book of Mormon sermons, the prophet Alma explains the relationship between faith and knowledge. He explains that we can develop faith by planting a seed of belief in our heart, and watch to see something grow.

If something grows, we can through evidence deduce that the seed was good. But at the end of explaining this process Alma asks, “And now behold, after ye have tasted this light is your knowledge perfect? Behold I say unto you, Nay; neither must ye lay aside your faith” (Alma 32:35-36).

Alma makes it clear that no matter what spiritual evidence we have experienced, it should never stagnate into knowledge, and should instead remain vital faith. Alma warns in clear terms the negative effects of relying on knowledge, “Yea, your knowledge is perfect in that thing, and your faith is dormant” (Alma 32:34).

Alma then describes a different process to growing faith, one that doesn’t rely on a scientific like examination of spiritual progress as evidence. In this example, Alma once again uses the seed, but rather than watching the seed to see if it grows, Alma encourages us to “nourish it with great care, that it may get root” (Alma 32:37). Alma concludes by saying that if we nourish the tree “by your faith with great diligence . . . it shall be a tree springing up unto everlasting life” (Alma 32:41).

In this model we don’t look at the seed skeptically waiting for it to prove its worth to us, rather we dive in with diligence and faith. The goal at the end of this approach is not knowledge, but instead everlasting life.

Perhaps the life of Thomas the Apostle best demonstrates how weak knowledge is compared to faith. After three days Thomas’ slain Lord, Jesus Christ, rose from the dead. Understandably, Thomas was skeptical. But he eventually saw the risen Lord, and touched the wounds in his hands and feet. Thomas knew that Jesus lived.  Yet to Thomas Jesus explained, “because thou has seen me, thou hast believed: blessed are they that have not seen and yet have believed.” The knowledge that Christ had risen was not as important as the motivating factor of belief.

There is Power in Belief

We live in a world where evidence is constantly put on trial. Our politicians first debate the facts, before debating policy. Data drives decisions from the highest levels down to the most mundane. Many of the best sports teams even make trades based on “advanced analytics.” And I don’t mean to dismiss the importance of data, observation, and knowledge in any of these fields.

But it is important we do not allow faith to be drawn into the same debate over observable data. Faith occurs outside what we can measure on an Excel spreadsheet, or publish in a scientific journal. Proclaiming that we know a matter of faith can be an insecure reaction to this evidence driven world. We used to call those who felt comfortable not knowing every answer wise, now we often call them weak.

If One More Person Comments on Testimony Meeting Silence, I Will SCREAM