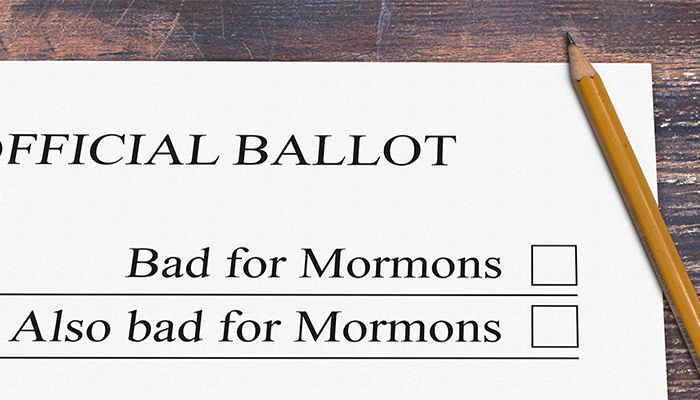 Angst: a strong feeling of anxiety, apprehension, or insecurity. Mormons and Jews are both feeling it this election season.

When Utah held its Republican caucuses, Mormons turned out against Donald Trump. The press noticed, especially since Mormons lean more conservative than just about anybody. Lately, Mormons are in the news again for being against Trump.

On June 13th The New York Times wrote the most recent of many stories about how Mormons view The Donald. The NYT cited Mormons’ high moral standards and frugal ways. There’s a big difference between Mormon values and Trump’s serial adultery and “tricked-out Boeing 757 with his name stamped conspicuously across the fuselage.” Mormons are also conflicted over his combative message, and that could cost Trump some votes in the Western swing states where Mormon votes matter.

Trump’s call for a ban on Muslim immigrants elicited the only official election statement (other than get-out-and-vote) from LDS Church leadership. “The Church of Jesus Christ of Latter-day Saints is neutral in regard to party politics and election campaigns,” the Church’s statement read. “However, it is not neutral in relation to religious freedom.”

Early Latter-day Saints spent much of the mid-19th century being chased into the desert by bigots and demagogues. Elected officials tried to “exterminate” them. Propagandists painted them as a nefarious foreign race (defined, according to a report printed in multiple medical journals, by their “yellow, sunken, cadaverous visage” and “thick, protuberant lips”). In an eerie bit of foreshadowing, the United States secretary of state sought in 1879 to restrict the flow of Mormon immigrants from overseas, arguing that America must be protected from these “prospective lawbreakers.”

In addition to Latter-day Saints’ compassionate stance on immigration, partly because of their experience in foreign countries serving missions, the NYT talks about the high levels of education Mormons attain, their stable families, and middle-class incomes. People like that seem not to be Trump fans.

Another article on Yahoo.com said the following:

Utah Lt. Gov. Spencer Cox has been particularly vocal about his distaste for Trump, retweeting anti-Trump sentiments on Twitter, and delivering a blistering attack after Trump questioned Mitt Romney’s faith. “A person running for office, in our party, thinks it’s OK that if you question his politics, he can question your religion,” said Cox. “I have a message for the 3 million people in Utah for Mr. Donald Trump: That’s not how we roll in Utah, and that’s not how we roll in the United States of America.”

So, that means Mormons will vote for Hillary Clinton, right? Not so fast. Utah Democrats highly favored Bernie Sanders in their caucuses. A large Gallup report released last month showed that just 33 percent of Mormons had a favorable view of Mr. Trump; for Mrs. Clinton, it was 21 percent.

More Mormons are Republican than are members of any other religious group. The Democratic platform doesn’t seem to serve them well, especially where liberal moral stances are involved. Mormonism does not accept gay marriage or abortion (except under certain conditions), and it decries the crumbling of family-centered values. Social welfare is another sticking point, because Mormonism emphasizes self-reliance.

So Mormons are stuck. They can’t approve of the conservative candidate, and they fear liberal progressivism and secularism. They are between a rock and a hard place.

What about the Jews?

Tablet Magazine is a hard-copy and online magazine for Jews. They are also concerned about both Clinton and Trump. The magazine published an article recently called “No Matter Who Wins in November, the Jews Have Already Lost.” According to Tablet, the choice for Jews is “between a thoroughly corrupt cynic and a reprehensibly deranged manchild.”

The article talks about half-a-century of Jewish blossoming in America and how it’s about to come to an end, no matter who wins. The article quotes usually-optimistic Stephen Spielberg, saying, “The world is full of monsters.” Tablet added that supporters of Donald Trump use social media to launch anti-Semitic attacks on Jewish reporters. Tablet also said,

But the twilight of the Jewish American dream is not a horror movie; it will not come about by the bloody hands of maniacs. Instead, it creeps up on us in a column of a thousand tiny statistics, each easy enough to explain away on its own but none advisable to ignore. The end of Jewish America is everywhere you look.

Look rightward, and you’ll see the Republican leadership trying to rationalize away what, for Jews, ought to be the non-negotiable fact that bigotry must never be tolerated, no matter its targets and no matter the circumstances….

Look leftward, and things are hardly better. There it’s the Rise of the Planet of the Progressives….Younger Americans, as surveys and studies unfailingly tell us, are slouching toward a more perfect progressive dogma, and the political constellations they’re likely to form will almost certainly not be hospitable to Jews.

Mormons see the same thing. To the right, the exclusion of and refusal to understand Islam. Mormons know where this goes — if we can exclude one misunderstood faith, we can exclude another. To the left, people who will not tolerate anyone who won’t buy into a liberal agenda, including liberal morality. Either way, it sucks.

What you do When You are Cornered

Both Jews and Mormons have histories of persecution, although it’s almost embarrassing as a Mormon to compare our historical suffering to that of the Jews. When cornered, both groups have resorted to accommodation mostly and aggression rarely. The Jews, especially, are very talented at surviving in complicated, oppressive environments.

Liel Leibovitz, who wrote the article for the Tablet, looks forward:

Clowns to the left of us, and racists to the right, we American Jews may finally awaken from our 30-year nap and learn again how to be a community that grapples fiercely with big ideas….

We Jews are outsiders. Herein our sorrow, herein our greatness. Imagine what we can do if moved not by the soft tremors of party politics but by the big jolt of feeling, after all these years, politically homeless.

There’s no point in waiting until November. No matter who wins, the Jews have already lost. It’s time now to do what we do best: Shake off the ashes, say a prayer, and rebuild.

Mormons will continue to work for religious freedom and honest government. We also need to increase our unity with all the religions that will be marginalized by any outcome of the 2016 presidential elections. We need each other’s support, more so now than ever.