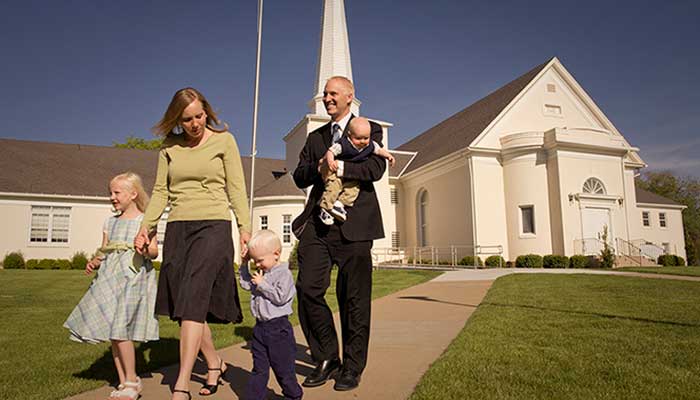 As Latter-day Saints reflect on their pioneer ancestry, naturally we examine the way their legacy affects us today. We look at what parts of their experience continues to inform our behavior.

Much of today’s conversation about faith in the United States focuses around religious freedom. Latter-day Saints’ attitudes toward this important subject inevitably come from our pioneer background.

The Pioneers of Christianity

The Religious Freedom of Christ

To understand the full impact of our pioneer forebears, we should look at not only the earliest members of the Latter-day Church, but our earliest Christian forebears as well.

In many ways, Ancient Rome was remarkably progressive toward religious liberty. Conquered lands were allowed to continue their religious practices, and the deities of those faiths were often enshrined in the Roman religious pantheon.

Which is why Christ’s faux-trial is so disheartening. The secular government of the time found Christ innocent of every crime. Christ’s teachings could have likely been accommodated among the variety of Roman faiths.

When Pilate washed his hands, in essence, he refused to protect Jesus’ religious expression, allowing him to be crucified for what amounted to fear and religious disagreements.

While this simplifies the many socio-political factors at play, and while Christ’s death was both prophesied and necessary, there is little doubt that Jesus’ state-sanctioned death would not have occurred if even Rome’s existing religious freedoms had been adhered to.

The Apostles Killed for Preaching the Gospel

After Christ’s death, the apostles were left to lead the church — to pioneer the missionary efforts throughout their sphere of the world. The poignancy and success of their missionary efforts caught the attention of political and religious rulers.

While the individual circumstances of each apostles’ death differ, they can be well summed up as the result of fear or disagreement about their religious faith.

Of the 12 apostles, Simon Peter, Philip, Thaddaeus, and Simon were all crucified. James (son of Zebedee) was beheaded. Thomas had a Spear put to him and Matthew was stabbed in the back. Andrew and James the Lesser were beaten to death. Bartholomew was skinned alive and then beheaded.

Their fight was not in vain. Those who were converted to Christianity carried on the battle for their own personal religious freedom. The Roman government was rather tolerant of outside religions, but it was distasteful to Romans that Christians “partook of the body and blood” of their supposed God.

Yet, there had always been an inherent tension with the Roman’s approach to freedom of religion, simply starting to worship the additional gods of the locals, and the monotheism of Judaism. But while Judaism did not seek converts and stayed localized, Christianity, which shared Jewish monotheism, was beginning to spread.

Nero, the Roman emperor, instigated the first Jewish-Roman war and, in 65 AD, put laws into place to exterminate Christians. Part of this was to deflect blame for the great fire in Rome. Citizens felt Nero had set the blaze himself, because he built an outlandishly lavish palace over the ruins.

A year later in 66 AD all of the Jerusalem-based Christians fled to the city of Pella (in modern-day Jordan). Contemporary accounts report that many hoped the city of Pella would become a place where they could live free to worship their God in their way. For a time, Pella seemed to be that safe haven for them, but it didn’t last.

“The more we are persecuted and martyred, the more do others in ever increasing numbers become believers.”― Justin the Martyr (100-165 AD)

The image of Christians tossed into the Colosseum to be eaten by lions remains, to this day, a stark reminder of the persecution that can occur when religious freedom is not protected.

The Pioneers of the Restored Gospel

Orthodox Christianity’s political victory over the ancient world eventually led to the complete loss of religious freedom. The reformation fought this status-quo, and the result was largely a mishmash of countries each with an official religion.

The United States became the first country to enshrine the freedom to exercise individual religious liberty, which is why the story of the Latter-day Saint pioneers is so disheartening.

“Congress shall make no law respecting an establishment of religion, or prohibiting the free exercise thereof.”― The First Amendment

Joseph Smith, called by God as a prophet, began teaching doctrine that went against the Protestant status-quo. Much like the early Christians, state-sanctioned murder did not happen immediately. These Mormon pioneers struggled to find a home, and it wasn’t until they were feared politically that the governor of Missouri issued the following order:

“The Mormons must be treated as enemies, and must be exterminated or driven from the state.”― Governor Boggs

The Church escaped Missouri to Illinois, hoping to find a place of refuge and peace. They were met with kind and open arms from the people of Quincy, Nauvoo, but such openness was only to be a temporary reprieve.

In time, under trumped up charges, Joseph Smith and other Church leaders were imprisoned. On June 27, 1844, at Carthage Jail Joseph Smith and his brother Hyrum died martyrs as a mob rushed the jail.

“I am going like a lamb to the slaughter; but I am calm as a summer’s morning; I have a conscience void of offense towards God, and towards all men. I shall die innocent, and it shall yet be said of me—he was murdered in cold blood.”― Joseph Smith

After a dangerous trek across the continent they found their new home in the barren dessert of Utah, away from civilization and corrupt governments. Finally, they were free to live their religion, to worship their God, and to read their scriptures in peace.

But these freedoms had not come without first experiencing great sacrifice.

The Pioneers of Religious Freedom Today

What the Past Has Taught Us

You can probably say that the fight for religious freedom is in our blood, whether or not we have pioneers or early Christians in our family histories. We acknowledge that without their efforts, the Church wouldn’t be what it is today, and we won’t let it or our values turn to dust.

The early Christians and the pioneers taught us three very valuable lessons that we hold to very strongly today:

Although The Church of Jesus Christ of Latter-day Saints has expanded across the world, reaching hundreds of people day by day, we have differed very little from our 1800’s teachings and the beliefs of the early Christian saints.

Today, the United States is moving toward increased legalization and acceptance of behaviors that used to be largely considered immoral, but still violate Christian teachings and beliefs.

It is important that we continue to take advantage of our hard-earned religious freedom to advocate for people to choose the path that will help them return to their Father in Heaven.

Secular laws do not need to enforce this morality, but they must protect our ability to advocate for and defend our beliefs.

We know what it is like to not be free to live our religion. We have fought long and hard. Yet, today the battle is not just for our own religion. It is for the right to practice religion in general and to not just hide it away at home or in the chapel. We have a ways to go, but little by little successes are happening.

“As the Mormons succeeded, so America can succeed, if we will not give up or turn back.”― President Kennedy

Both inside and outside of the Church, many feel that religious freedoms are still at risk. In the United States, many today are fighting for the right to live their religion and keep a job. Around the world, the issue is much worse. In the Middle East, Christians are still put to death. In some Asian countries, going to a place of worship is not allowed.

The 2015 year has definitely been our battle ground for the cause, starting in January with a press conference on the issue. In March, the Church supported Utah’s anti-discrimination and religious freedom law which would protect people’s rights despite sexual attraction or religion. L. Tom Perry was there as Governor Herbert signed the bill.

Later on that month and in May apostles went abroad to speak about religious freedom. Dallin H. Oaks spoke to the Argentine Council for International Relations. D. Todd Christofferson gave the keynote at Brazil’s Religious Freedom Celebration. And Quentin L. Cook spoke at the prestigious Catholic University of Notre Dame.

In July, the Mormon Newsroom came out with a video answering the question “How Can Members Defend their Religious Freedom?”. In it, apostles cautioned us to be active participants in the issue.

Every generation of time has led up to now. It is your turn. With or without the suspenders or long prairie dress it is your turn to be a pioneer. There are issues surrounding religious liberty that are new to our generation. We can continue the work of the pioneers in this important area.

Tell us one thing that you can or have done to stand up either for your beliefs or the beliefs of others.