Life Public Shaming Has No Place in God’s Church 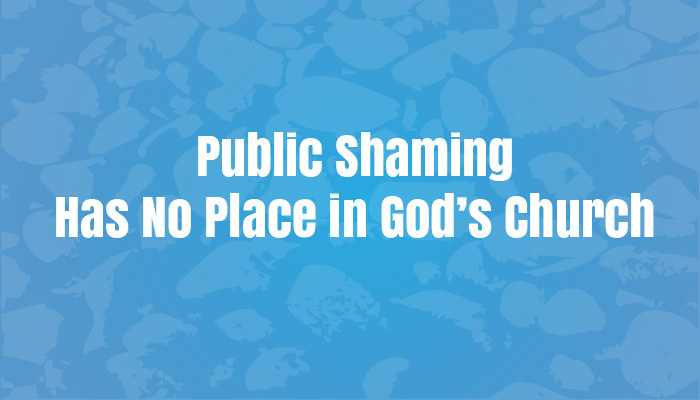 “What goes around comes around.”

“You reap what you sow.”

“She must have asked for it, look at what she was wearing.”

“It’s his own fault, he should have known better.”

Did I miss any? All I had to do was scroll down the comment feed of a few social media sites, and the shaming all but jumped out at me and into my lap.

A girl was raped, so the defending lawyer asked her about her drinking problem.

A friend was harassed online with pornographic images and threatening propositions, and her friends lambasted her for taking a stance.

A student goes public for hazing and is trolled for being oversensitive and needs to “man-up.”

Since when did we stop being compassionate?

We all know the story: an adulterous woman, an angry mob, and the Pharisees standing back pestering Christ on how to deal with her “justly,” trying to trip Him up—surely you cannot fairly judge and show compassion at the same time?

Victim blaming has become a last ditch effort to prove that we live in a just world where actions have consequences and people can control what happens to them. However we know this not to be true. It isn’t as simple as, you do good, and good things will come to you. You do bad, and bad things happen to you. You eat healthy and exercise, ergo you’ll live a longer life. You drink and smoke, and you’ll die of cancer before you’re forty. Be nice to people, and they will be nice to you.

To shatter that algorithm that if bad things happen to good people, we instinctively reach for a plausible cause: were they really that good to begin with? The paradox is unnerving.

All of the sudden we are forced to recognize that we are vulnerable. That random, horrible actions can happen to anyone at any time. Natural disasters do not discriminate between the good and the bad, the rich or the poor, the young or the old. Genocides and war are created by evil used to destroy the righteous. And even closer to home: maybe a victim wasn’t raped because she was drinking or wearing revealing clothing, but because bad people do bad things to anyone they want, at any time. We can’t control our environment, and shaming the victims doesn’t alter this reality.

When we rationalize, justify and find evidence that the horrible act wasn’t random, that the victim wasn’t innocent, we are allowing ourselves to naively think, “As long as I’m good it will never happen to me.”

We know that the world is not just. That through God’s plan all of us have been granted to act on our own free will whether it is good or evil, or maybe even indifference. He knew that the world would be full of injustices, suffering and hardships put upon the most righteous of his children. As a flawed human it is difficult for me to be reassured by heavenly rewards while I am surrounded by brothers and sisters who have been through hell on earth.

I am tired of reading about the inaccurate and insensitive excuses as to why so many of my friends and family have been abused and hurt. Going public and standing up for yourself in the hopes that it will bring comfort and strength to other victims is not an invitation to shame them.

No, she did not ask for it.

No, he did not deserve it.

No, you can’t ignore this because it makes you feel uncomfortable.

He that is without compassion among you, let him first cast a stone at her.