Life Relationships How to Relate to Those Who Leave the Church 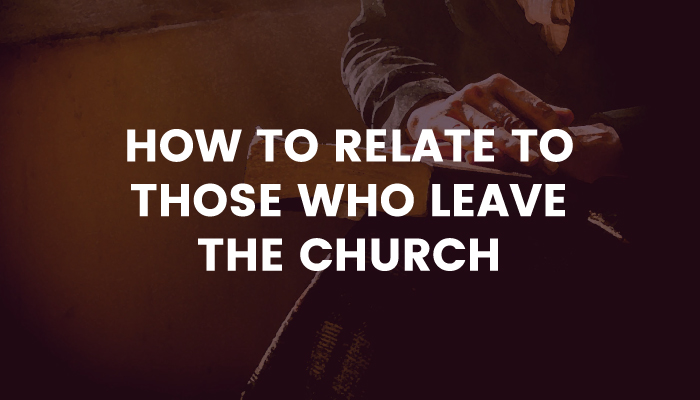 The writer Alain de Botton had just published his book Religion for Atheists, and he knew one thing for certain: He wasn’t going to visit Utah on his book tour.

After all, why would Mormons care about a book specifically for nonbelievers? Why would they buy a book that says atheists should embrace the positive aspects of religion? Mormons already have religion. They wouldn’t want to read about it from the perspective of a nonbeliever.

Imagine de Botton’s surprise when he discovered that book sales were eight times higher in Utah than in any other state.

In a radio interview, de Botton explained his theory for the booming book sales. He suggested that there are people in Utah who love parts of Mormonism but struggle with many of its public stances and truth claims. Often these people are so unsettled that they leave the fold, distancing themselves from friends and family.

This trend is a major source of cultural tension in Utah right now, as well as throughout the global Mormon community. For the most part it’s happening behind the scenes, but as sales of Religion for Atheists suggest, the tensions are more widespread than we may think.

I’ve wrestled with these tensions myself.

My wrestling started more than a decade ago, while I served as a Mormon missionary in California. Through conversations with investigators, I learned things about church history I hadn’t known before — that Joseph Smith looked into a hat to translate the Book of Mormon, that he had nearly three dozen wives (many young, many married), and that his translation of the Book of Abraham differs completely from the papyrus on which it was based.

If I didn’t know these facts about the church, what else didn’t I know? I felt increasingly anxious. I told my mission president I was struggling, but he wasn’t interested in discussing the details, saying that my questions would be sorted out in the afterlife.

I wrote home, asking for help. First, I wrote my dad, who sent me a book that addressed difficult questions about church history. Next, I wrote my favorite high school teacher, a mentor of mine who happened to be a non-Mormon. She told me that because I had committed to serve a mission, I should finish and worry about my troubling questions when I returned.

These answers were enough to quiet my concerns for the remainder of my time in California.

It’s strange, but when I returned home from my mission and started school at Brigham Young University, my worries about Mormonism faded. I focused on school, work, and dating. I shelved my religious questions and stopped talking about church history altogether. I was satisfied with simply being Mormon. I started grad school and got married, and everything seemed fine.

Then my youngest sister left the Church.

Not long after, my best friend from high school also left the Church. The same cycle of heartbreak followed.

I’d had friends leave the Church before, several when I was in high school. Many of them left partly out of rebellion, a natural teenage response to an orthodox and rule-bound religion.

But my sister and my best friend weren’t like that. In both cases, they weren’t leaving because they rejected the commandments of Mormonism, but because, after careful research, they rejected its truth claims.

To understand their concerns, I dove back into church history in earnest, reading books like Rough Stone Rolling, Mormonism and the Magical Worldview, David O. McKay and The Rise of Modern Mormonism, and so on. I also read about uncomfortable Mormon topics across the Internet, including official essays on LDS.org that revealed more facts about the origins of the Church that were (once again) new to me.

All this studying brought back old anxieties. These weren’t simple taunts or red herrings posed by bitter nonbelievers. These were verifiable facts, many of them supported by official church documents. How could I reconcile these facts with my desire to stay united with my friends and family? Was there a way to be authentic and still be close to those I loved?

My questions led me to search the past for a way to move forward. College taught me to love the ancients, and I scoured texts from classical philosophers, looking for the root of a quality life—something that could serve as common ground for believers and nonbelievers.

What I discovered has been around for a long time.

It surfaced with philosophers like Socrates, Plato, and Plotinus. Then, like a message in a bottle, it was carried through the ages, finally uncorked and named in the 15th century by a gay Catholic priest named Marsilio Ficino.

Since that time, the idea has bubbled up in various places. The philosopher Immanuel Kant wrote three foundational treatises in the 18th century that each covered one aspect of the idea, and other writers such as W.E.B. Du Bois and C.S. Lewis wrote about it as well.

The idea is this: To live a quality life, we must actively pursue the proper balance of truth, beauty, and goodness.

But truth, beauty, and goodness can be hard to pin down. What do they mean in practice? One contemporary description that resonates with me is from Stephen Covey’s book The 7 Habits of Highly Effective People. In it, he outlines the importance of intellectual, spiritual, and social exercise, and he gives examples of what each one looks like in practice:

Of course, listing these ideals is easy work. Truth, beauty and goodness are vague enough to sound promising without ruffling any feathers, and at first blush the advice might seem like breezy, self-help material. “Just follow these three easy steps to a quality life!”

In reality, the key to a quality life — regardless of belief — is to properly balance these three ideals.

And there’s nothing easy about that.

“Nothing in excess.” – inscription on the temple of Apollo at Delphi

The contentions between believers and nonbelievers arise when we fall out of balance in our pursuit of truth, beauty, and goodness.

Let’s look at how this happens, starting with truth:

Truth without beauty is cynical. Consider the example of a woman who discovers uncomfortable facts about her religion and leaves as a result. She used to say prayers of gratitude, sing hymns, and ponder devotional texts. Now her encounters with spirituality consist of rehashing cold facts, waxing cynical, and getting angrier and angrier about the system that wronged her.

Is this a quality life? True, she’s better educated (read: armed with more truth), but she lacks the inner peace that she once had. She would benefit from stepping away from activities that fill her with cynicism and instead deliberately express gratitude, spend time in nature, meditate, and read texts that speak to her heart.

Truth without goodness is lonely. This is the story of Stephen Dedalus, the main character in James Joyce’s masterpiece Portrait of the Artist as a Young Man. As he reaches maturity, Stephen becomes convinced that Catholicism, especially as it’s practiced in Ireland, is deeply flawed. He decides to leave his community and disassociate himself from his friends, family, and religion. He even refuses to pray out loud for his mother on her deathbed.

However, Stephen is soon racked with guilt for what he did to his mother. He grows increasingly lonely and despondent, and his choice to reject his community haunts him. He begins to realize that communities, friendships, and family require compromise.

Beauty without truth is gullible. This happens when people interpret all peaceful feelings as evidence of the truth. Such people are prone to deception—believing in myths simply because the myths seem beautiful. However, as Flannery O’Connor once said, “The truth does not change according to our ability to stomach it.” Sometimes the truth hurts.

Beauty without goodness is selfish. It’s the pursuit of spirituality without the willingness to roll up our sleeves and help the truly needy.

Goodness without beauty is routine and bland. It consists of visiting the lonely and the sick while inwardly resenting the experience. It’s robotic and perfunctory, born out of duty rather than desire.

Goodness without truth is harmful. For example, Mormons once mistakenly believed that God changed people’s skin color based on their worthiness. These Mormons wanted to be good by having faith in their religious authorities, but they were ignorant of the science of skin color. And this ignorance — as is the case with all ignorance — was harmful. Ignorance is only bliss for the ignorant. It hurts everyone else.

The Quality Life Sits in the Center

As we can see from the examples above, it’s only by embracing all three ideals that any one of them has a hope of being realized.

We might say that the quality life sits in the center of a Venn diagram with three overlapping circles — one for truth, one for beauty, and one for goodness. Pursuing only one of these ideals pushes us away from the center, while pursuing all the three pushes us toward it, toward a life well lived. As the semi-Mormon scholar Wayne Booth said, these three ideals “rival one another at the fringe, but in the center they join.”

Sometimes I meet Mormons who believe that a quality life is defined exclusively by Mormon milestones. “My kids all went on missions, married in the temple, and produced lots of grandchildren,” they might say. But those characteristics don’t necessarily indicate a quality life. Going on a mission, marrying in the temple, and having kids—all these milestones have the veneer of success but not necessarily the substance.

A better measure of a quality life is whether we’re pursuing a balanced approach to truth, beauty, and goodness. That measure works inside or outside of any belief system.

Ultimately, whether your loved ones are believers or nonbelievers, chances are that you still share far more similarities than differences when it comes to truth, beauty, and goodness. Once you look for those similarities and add a dose of compromise, you will find ways to develop intellectual, spiritual, and social health together. Daughters, sons, brothers, sisters, wives, husbands, parents, and grandparents. Perhaps you will talk all night about your favorite books, go on long walks in nature, serve in a local homeless shelter — anything but focus on your differences.

Will this new definition of success completely erase the divide between believers and nonbelievers?

But it can help us close the gap.