Benjamin Armstrong and his bride, Aaliyah Hall, are receiving a lot of attention after sharing a video of friends and family performing the haka on their wedding day.

The couple married for time and all eternity in the Hamilton New Zealand Temple last Friday. After the temple sealing, close friends and family performed the Maori dance. While the haka is traditionally an ancestral war cry that uses shouting, slapping and exaggerated facial expressions to intimidate opponents, the Maori people also perform the dance as a symbol of respect and love.

Since Armstrong shared the heartfelt performance on Facebook, the video has gone viral, and the couple says they are humbled by the responses they’ve received from around the world.

Armstrong told OneNews that Maori members of the Church often perform the haka during momentous occasions in an individual’s life to show support. He said,

All those guys, the people that are so close to your heart, and who you’ve shared so many experiences with. You can’t help but feel overwhelmed.

The groom’s best man organized the haka while his older brother, Joel, led the dance, which they performed alongside Armstrong’s father, younger brother Jarom, and other close friends and family. Armstrong’s cousins’ production company, Westone Productions Limited, captured the emotional moment for the newlyweds.

Armstrong, who Hall assures is Maori despite his fair skin, joined in toward the end of the dance, followed by his wife. Hall explained that she was surprised by the dance and blown away with the heartfelt performance.

“I wasn’t planning on jumping in until one bridesmaid did,” Hall told BBC. “I felt the need to show love and respect back. I was really blown away.” 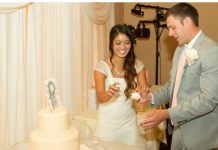 How To Transform a Cultural Hall for Your Wedding Reception 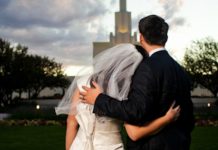 12 of THE CUTEST LDS Wedding Photos You Have Ever Seen 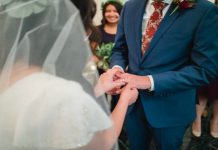