Buzz The Reality of Teen Sexuality: No, Not Everyone’s Doing It 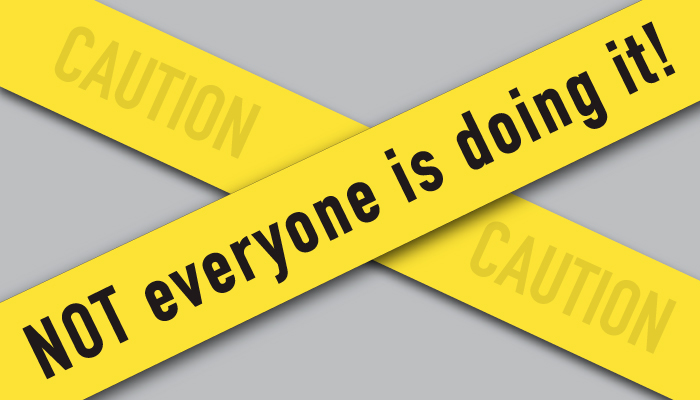 You might think that everyone’s doing it. Teenagers everywhere are having sex, right? So why don’t you? Before you give in to the trend that media wants you to believe, take a second look at those numbers on teen sexuality. Because they’re not what you think.

According to the Numbers

Yes, too many teens are sexually active, and this creates a range of problems that are not limited to STDs and unwanted pregnancies. Sexual activity can cause depression, heartbreak, and low self-esteem. However, those numbers that were once as high as 51 percent and 60 percent in 1988 for teenage girls and boys respectively have fallen to 42.4 percent and 44.2 percent, according to the Institute of Family Studies (IFS). Put in another way, less than half of teenagers have actually had sex, which is a far cry from what you see on TV, social media, and in magazines.

We’re not just talking about pornography here. Avoiding that is a given. We’re talking about regular media that you see on your phone or TV or magazines, stuff that makes sex seem like a normal aspect of teenage life (which it isn’t).

What teens need is support for choosing to forego sex. They need society to respect and do what it can to help them stay true to their choices, and this means not publishing harmful articles designed to derail their good intentions. This also means parents and families rallying around them.

When asked why they didn’t have sex, teens largely stated that it was due to their religion or morals, followed by not being ready yet. Possible pregnancy and and STDs are a distant third and fifth on the spectrum.

What does this mean? It means that values and morals are fundamental. The IFS states:

“First, it tells us that values matter more to teens than avoiding STDs or even pregnancy (which was third on the list for both boys and girls). And the people who most strongly shape young people’s values about sex, including what type of relationship signifies the “right person,” are parents, who are consistently shown to have the biggest influence on teens when it comes sex.”

The National Campaign to Prevent Teen and Unplanned Pregnancy builds on the idea of parents influencing their children. It says, as reported by the IFS:

“Teens who are close to their parents and feel supported by them are more likely to abstain from sex, wait until they are older to begin having sex, have fewer sexual partners, and use contraception more consistently.”

But perhaps the simplest way to support your teen (or get support from your family) is to let them know that it’s okay to be a virgin and that NOT everybody is doing it. It’s as simple as that. At least 86 percent of teens say that knowing being a virgin isn’t shameful—but a badge of honor—is helpful. And 66 percent say that knowing they’re not alone in waiting would help them (and others) wait.

About 65 to 70 percent of young adults wished that they had more sex education, but not the typical “how to put a condom on a banana” or the mechanics type of education. They wished they’d known about love and emotion in regards to sex because they were not prepared for the emotional fallout.

It turns out, that teens need far less how-to knowledge on how to have sex (no thanks Teen Vogue), but more support on delaying it, on understanding that all the emotional implications that come with it are best explored under the bonds of marriage.