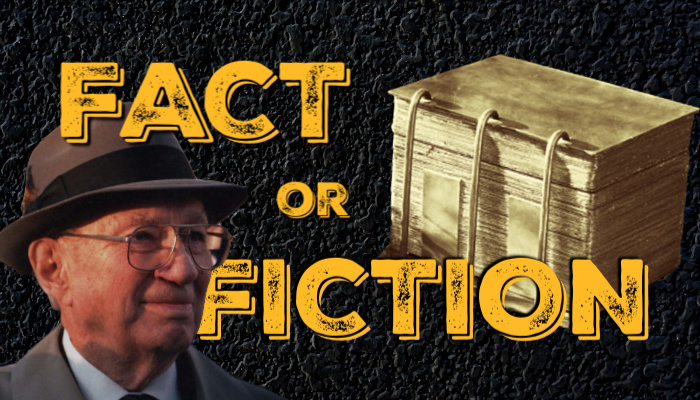 There’s good news and there’s bad news. The bad news is that this quiz is going to be extremely challenging. The good news is that, on each question, you’ve got a fifty percent chance of guessing correctly. So, who knows, maybe you’ll do alright!

Pay close attention to the wording and details of each question before answering. This quiz is meant to be deceptive, tricky, and maybe even frustrating. Am I in your head yet?! Good luck.

FACT or FICTION: Brigham Young believed that both the sun and the moon were inhabited by human-like beings.
Fact
Fiction

According to the Doctrine and Covenants, the name of the brother of Jared is Mahonri Moriancumr.
Fact
Fiction

The Church of Jesus Christ of Latter-day Saints owns and operates a large nuclear-bomb-proof vault that is embedded in the ground underneath Temple Square.
Fact
Fiction

All of the following statements are true:

While overlooking the Salt Lake Valley, Brigham Young famously stated, "This is the place."
Fact
Fiction

Presidents Russell M. Nelson, Thomas S. Monson, and Gordon B. Hinckley did not serve full-time missions when they were younger.
Fact
Fiction

As a missionary, Lorenzo Snow presented a Book of Mormon to Queen Victoria.
Fact
Fiction

According to legend, some of the gold leafing used on the interior and the Angel Moroni of the Salt Lake City Temple was acquired from sacred Native American mines/treasure hordes.
Fact
Fiction

Click "View Results" to see how you did! (By the way, this counts as a question and is therefore a freebie that'll be added to your final score. You're welcome.)
View Results