Uncategorized BYU Day and 3 Other Holidays in October that are Way Cooler... 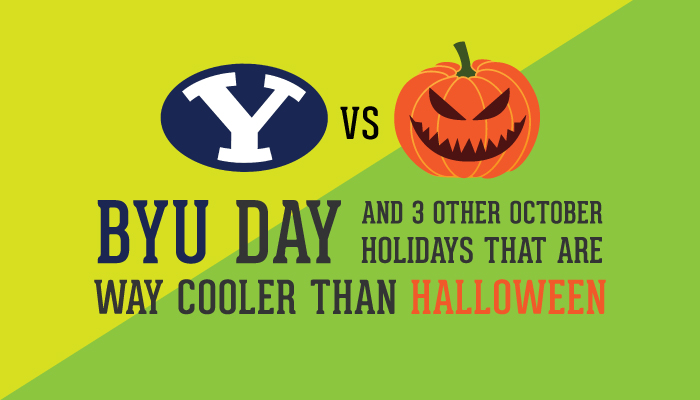 My husband is unabashedly anti-Halloween.

He can’t stand the immense amounts of refined sugar consumed around this holiday. He cringes when he walks by the 20 aisles of Halloween-related candy, decor and costumes at Walmart (beginning in early September!). In fact, he essentially becomes Halloween Scrooge every October 31 when he turns off all the lights in the house lest some group of costume-clad neighborhood children dare think we are home. And heaven forbid we attend that ward function that starts with “trunk” and ends with “treat.”

Needless to say, when our kids mention Halloween in any way, shape or form, his answer is always, “Halloween has been CANCELLED!”

Over the years of living with this passionate anti-Halloween guy, I have slowly started to wonder why do we put so much emphasis on this holiday?  I mean, we all know the roots of Halloween (and a few other holidays) are found in pagan festivals. On the website History.com, it states: “[Halloween] is thought to have originated with the ancient Celtic festival of Samhain, when people would light bonfires and wear costumes to ward off roaming ghosts.” So, okay, that’s a little weird. And it is kind of creepy to see four-year-olds dressed up zombies or ghouls knocking at your door. The whole spooky/scary/grotesque costume thing has never been my cup of hot chocolate.

Some might say that Halloween is different in our culture today—the meaning has changed and it’s just a time to have some harmless fun. Honestly, I’m not here to debate your personal feelings about Halloween.  However, as Latter-day Saints, I believe that it is our duty to take a look at culture in general and not to choose to do things just because the rest of the world does. I feel it’s important to take traditions of all kinds and put them to the “Thirteenth Article of Faith Test.” Are these cultural habits virtuous, lovely, of good report, or praiseworthy?

That being said, I decided to go on a mission of sorts to research other important dates in October that might be a little (or a lot) more praiseworthy than the well-known All Hallow’s Eve. In case you’re wondering what I came up with, here’s my list: 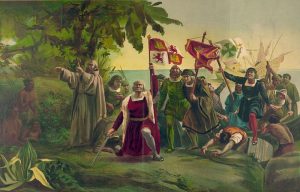 The celebration of Columbus and his accomplishments have been fiercely debated over the last several years, but in a 1992 Ensign article commemorating the 500th anniversary of Columbus’ discovery of America,  De Lamar Jensen observes, “…our awareness of what Columbus accomplished under God’s direction ought to remind us of our own indebtedness and responsibilities as benefactors of his fortitude.” The Book of Mormon also indicates that Columbus followed the direction of the Spirit, “And I looked and beheld a man among the Gentiles, who was separated from the seed of my brethren by the many waters; and I beheld the Spirit of God, that it came and went forth upon the many waters, even unto the seed of my brethren, who were in the promised land” (1 Nephi 13:12). Bottom line—Columbus was not perfect, but he was inspired. Sounds like a pretty good guy to celebrate.

Okay, I might have added this date in to butter up all you Cougar fans out there. Although the university started as Brigham Young Academy and went through a series of name and location changes over the years, this date is generally claimed as the founding date of Brigham Young University.

Celebrate “BYU Day” by singing the fight song often heard at football games. If you’re not a sports fan, you can always take some time to peruse an online gallery of historical campus photos provided by the Harold B. Lee Library. 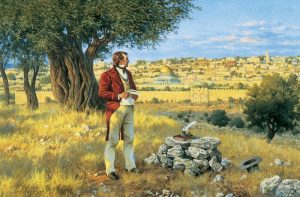 Sometime after becoming a member of the Church, Orson Hyde received the impression he would one day work with the Jewish people. In 1840 he had an incredible vision showing him the foreign cities in which he would serve a mission. One of those cities was Jerusalem. Under the direction of the Prophet Joseph Smith, Elder Hyde departed April 15, 1840, on a mission that would eventually culminate in his dedication of the Holy Land for the return of the children of Abraham.

Do yourself a favor this October 24 and commemorate Elder Hyde’s miraculous mission by reading or watching this BYU Devotional given by Professor of Ancient Scripture, David Whitchurch. 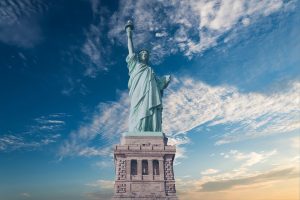 This colossal statue, designed by French sculptor Frederic-Auguste Bartholdi, was gifted to the United States to celebrate the Franco-American alliance during the American Revolution. The statue’s original full name was “Liberty Enlightening the World.” A young American poet named Emma Lazarus penned the famous words that are inscribed on the pedestal of the statue:

Give me your tired, your poor,

The wretched refuse of your teeming shore.

Send these, the homeless, tempest-tossed, to me:

I lift my lamp beside the golden door.

So remember, whether you have 15 plastic totes full of Halloween decor or you are a “Halloween Scrooge” like my husband, it’s never a bad time to re-evaluate why we do what we do. And who knows, you might help the world discover a long-lost holiday that’s more meaningful and less sugar-coma inducing.